Howlville: The Dark Past is a lightly-flavored science fiction-themed hidden object adventure game from N-Tri Studio. Featuring a balanced mix of puzzle solving, item hunting, and adventuring, Howlville manages to be a hidden object game without feeling like a rehash of the games that came before it, touching on common elements found in the genre but focusing intently on smart puzzles that really challenge the player. The result is something light and casual, recognizable but still different enough to offer mounds of enjoyment. 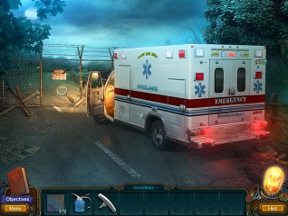 The protagonist Rachel lost her father when she was a child, and she's been searching for him her entire life. Gaining access to some "secret archives", she learned he was one of two scientists investigating a strange artifact in the town of Howlville. Something went wrong, though, and the town has since been declared off-limits, its location hidden from the public. Rachel eventually found the classified city only to be thrown in a mental institution shortly afterwards. Now she has escaped, and as the game begins, she's on her way to Howlville. As you probably guessed, things only get weirder from this point on, what with all the mad scientistry and whatnot...

Howlville (the game, not the place) is laid out in a series of small sections blocked by puzzles that require multiple steps to complete. As you explore each area, you'll pick up a number of items to keep in your inventory, most of which have logical uses later in the game. You'll also complete a number of mini-games to gain access to new areas, such as completing fuses to light up rooms, or gathering certain numbers of unusual items so you can open locked boxes, cabinets, and the like. 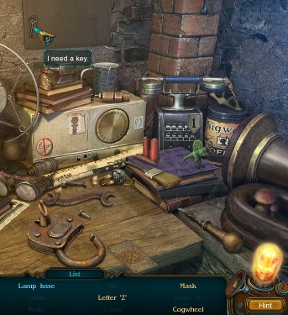 Howlville features frequent hidden object scenes, all of which are packed with interactive elements to create a much more dynamic feeling. Instead of staring at a list, staring at a scene, then clicking, you get to move things around, pick up items and use them on things, or shift things around to uncover previously hidden objects. It's quite a small addition to the hidden object experience, of course, but it manages to chase off the dry feeling and get you more interested in the game.

Analysis: Howlville: The Dark Past sticks with the established hidden object formula, but it does so without sinking too deeply into it. The story features a smattering of elements we've all seen before, such as mysteriously vanishing grandparents, a protagonist from a mental institution, and a dark, semi-haunted town to explore. But Howlville is almost parodical in nature, lightly skimming the surface of the hidden object genre just as an excuse to deliver a series of wonderfully-constructed puzzles.

The story and setting are simple but interesting, but the visuals do manage to stand out as being crisp and easy to see. The game doesn't support widescreen, however, which is a bit of a shame seeing as how it looks so good. Most of the time you'll be so focused on the unique mini-games and strange puzzles you won't be thinking about things like aspect ratios or black bars on the side of your screen.

Simply enjoyable is a good way to describe Howlville: The Dark Past. The game doesn't veer too far in any particular genre-defined direction, allowing it to maintain its likeability without alienating any type of player. It's got gameplay where it counts, though, and both the in-game puzzles and mini-games and are some of the most satisfying puzzles around!

Howlville: The Dark Past Walkthrough

Howlville: The Dark Past Walkthrough

Is it possible to switch playing mode once you've started the game (from easy to normal to hard and vice versa)? I couldn't find how to do so and that killed it for me. I wish you could customize difficulty levels like in Twin Vaccine BTW. The no custom cursor thing makes the game too hard for me but I don't want to have to play with the other clues on.