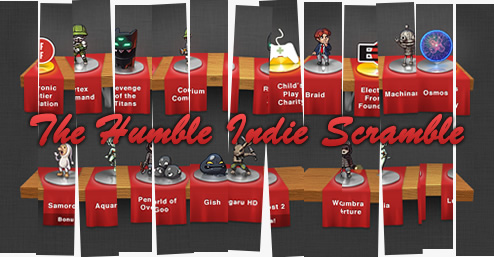 The second installment of the Humble Indie Bundle might not be available on the Internet's store shelves anymore, but we're still looking to give away a few more copies! If you want a shot at a shiny new Bundle, all you have to do is split the muddled-up anagram into three titles of games we've featured in the past and send in your response. We've had three winners so far this week, and you could be the next!

As you've probably noticed by now, the anagrams have been getting longer and more difficult. If you need a refresher on the rules or a peek at a sample, you can look here. Can you crack today's puzzle?


A COMICAL ICEBOX ACTED FOREVER IN AGONY. IN THE MEANTIME, DRAB FRENCHMAN GIGGLED.

Think you know the answer? Send the three game titles to us, along with a statement that you are at least 13 years of age, to: [email protected] Only one entry per person per puzzle, please. Multiple entries will be disqualified. This contest is open to everyone 13 years of age or older, void where prohibited. The winner will be drawn at random from all correct entries received. You have only until tomorrow, December 29th at 06:00 PM (GMT -5:00), so hurry!

Update: Congratulations to Nick! Your correct entry was chosen at random to receive a Humble Indie Bundle!

Answers to the riddle above:

Look for the next Humble Indie Scramble riddle.

Any forecast on how many Humble Indie Scrambles there will be? Five?

Thanks for the puzzles!

Got the last two but once again the first one takes the biscuit...

Power of posting. Guessed a key word in the title and used an anagram solver to finish it off ;)

This one was alright. I remember the first one from one of the....'announcements'. :)

To me the first one was obvious, but I guess that's because I remember playing the game.

I'm having fun figuring these out, even though I've won already. ^_^

Got it! the first one was tricky, but my searching skills are awesome, so i got it quick as a bunny rabbit.

Oh, and i LOVED that 1982 film, especially the sequel.

And also, DARN YOU DRAB FRENCHMAN FOR GIGGLEING AT AN AGONIZED ICEBOX!!! (no, that is not an anagram)

I got them all in the first few minutes (I remembered the award won by the first one), and even the second, which I never remembered the review for, I got to by searching. On the third however, I missed one word in the name and didn't realize...for the longest...time. Yeah, I hate anagrams.

I recognized the first game immediately when reading the description, but I thought it had a different name. It took a while to find it again in a different way.

Got them all :) I found this one easier than the last one, but I had played two of the games before this time