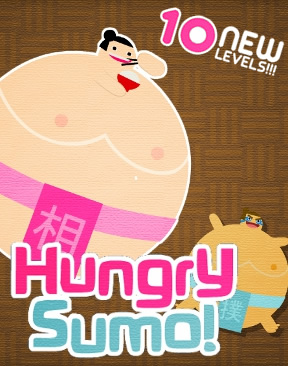 Sumo wrestling, as everyone knows, is a noble and ancient Japanese art where a rotund man bounces around like a ping pong ball, occasionally careening into other sumo wrestlers, and shoveling rice down his gullet as quickly as possible to increase his size and convert all adversaries into clones of himself. At least that's what I've learned from Hungry Sumo, the newest title from perennial JIG favorites NinjaKiwi. Fifty Sixty levels of addictive arcade goodness await.

The controls couldn't be simpler: click anywhere on the "ready" screen to start a level. When you hover over a sumo that you control (the jolly-looking fellows clutching red rice bowls), he will start chomping down rice like a college student at all you can eat sushi, and begin to grow in circumference. If you bump into an enemy sumo while growing, your sumo will immediately "pop" and be turned into a baby sumo of the enemy sumo's type, so avoid bumping into enemy sumo while growing. You can bump into your own sumo while growing with no damage.

Every time your own sumo hits an enemy sumo (except the statue sumo), both sumo will take damage relative to the size differential between the two. In general, a big sumo is going to cause a lot of damage to a small sumo, the exception being the oni sumo, who hits harder the smaller he gets. Your object is to leave no enemy sumo remaining on the level. While you start out facing only simple blue ninja, you're soon dealing with many more difficult challenges, such as the fiendish poison sumo. Don't be fooled by his "durrrr" expression and Frankenstein-ish friendly monster looks; a sumo that hits him will continue to shrink for a while, a horrible condition in a game where yes, size matters.

While the game play is completely different, Hungry Sumo has a lot of the jazzy Japanese charm that made the Sushi Cat series such a success. Even the music has that same kind of catchy funk. At first glance the game might seem to be unfairly luck-based, since you're at the mercy of the physics engine when it comes to where the little sumos bounce to. But in order to get far, you'll need to figure out that there's actually a lot under your control. You can influence trajectories by which sumo you choose to grow, for example, and in certain levels you may wish to make controlled sacrifices in order to gain an advantage elsewhere.

So loosen your belt, grab your industrial-strength chopsticks, and jump into Hungry Sumo for seconds. Or tenths. Or fiftieths. Yum.

This game is so adorable and charming. A little on the easy side, except for those darn annoying troll sumos!

I made it to about 36 before I started to get a bit twitchy, though it might just be that my mouse is not as responsive as I want it to be (always easier to blame the mouse, yessir!)

It's a good game, though.

By the gods, levels 42, 43 and 47 are the bane of my existence...
I can't believe I actually rage-quit on level 47.
Awesome game. Extremely challenging in the end :)

The poison sumo is a kappa, not a frankenstein.

NOTICE!
This game has FULL CONTROL.. compared to cushi cat (Just a heads up).

The Oni sumo doesn't do more damage when small, he just follows the weakest member of your herd, so to speak.

Joye, I think you got it wrong. The Oni sumo doesn't do more damage when small, it just moves slowly towards the smallest sumo you currently have.

I have a 3 week old baby, so it's possible that I suffered a momentary fit of new parent brain, but when I go to level 18 it says "tip: the oni sumo is most vicious when small", so... I don't know what to say! I'll ask Jay to contact the dev for clarification, but I don't THINK I'm wrong. If I am, I'm very sorry of course!

[We talked to the developer, and it turns out you're both right! Small onis both hit harder and pursue your sumo. The walkthrough has been edited accordingly ~Mike]

I'm not very impressed with this. The controls kind of suck. Having to put your mouse over the sumo you want to grow can be a very big pain, particularly when there are a lot of things happening on the screen at once and you can't find the cursor. I think it would probably be better to have the sumo numbered, and then just press the corresponding number to make a sumo grow. Other than it's pretty fun, though kind of simplistic.

There's a glitch with poison sumos, sometimes when you hit them, because you begin to shrink, you'll keep moving in their direction, making it impossible to grow without transforming.

@Dave Lopo: It happened to me with a stone sumo too

I've been on the point that I have like 5 or 6 sumos but I'm still overpowered by those growing sumo's.

Almost at the point I'm going to give up, which is a shame, because I want to finish this fine game.

I would enjoy this game a lot more if you had to click and hold the sumo to grow, instead of just mousing over. Since you naturally try to mouse over the center of the sumo, it's much harder to get away from him as he grows, making it really difficult to actually stop growing when you want (particularly when using a trackpad). Clicking would allow you to time your growth more accurately.

Also, the random movement is annoying. By that I mean each time you start, each sumo (yours and the enemies) go off in random directions. I found myself restarting a level several times because it was impossible if the sumo started the level moving toward the center.

That said, it's a fun concept and a good looking game. The variety of enemies keeps it from getting stale. If the later levels weren't so ragequit-inducing, I'd definitely be interested in playing more.

I would enjoy this game a lot more, if everytime it loaded, it didn't say it was locked and to go play it on ninjakiwi.com despite my address bar saying
http://ninjakiwi.com/Games/Arcade/Play/Hungry-Sumo.html

Hi Trun. I'd like to help you with your problem. Can you tell me which browser are you using? Also, are you using a school computer, or an anonymizer?

Fun game. Completed all levels. Those grower sumos are evil, much worse than the poison ones.

I think you should have to click to make the sumo grow -- otherwise you're left frantically trying to get your mouse off the body of an expanding target. It would be better if you could just release the mouse button when you wanted to stop growing.

Please where can i get the song???