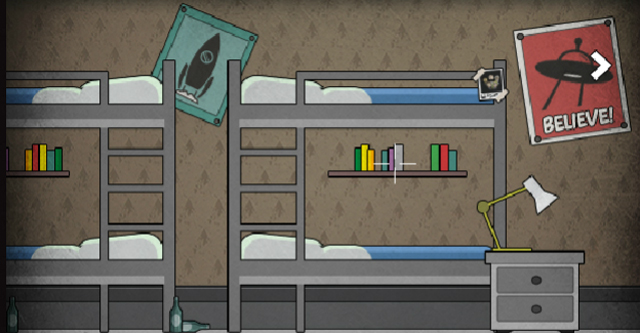 It's the year 2274, and facing the depletion of natural resources back on Planet Earth, the human population badly needs a new world to colonize. As part of the preparation, you and a number of crew members have been placed in cryogenic sleep for your long journey. Now though, it seems you are awake, and you must find the rest of the S.E.S. Valkyrie's crew, figure out your surroundings, and deal with the sometimes unstable reality of human emotions. If you are expecting a fully trained, professional working crew in this point-and-click, interactive fiction game by RunningZombie, prepare to be disappointed! Things will go wrong, and people will completely flip out when a few plants die. You will be saddled with life-and-death decisions in the later part of the game that affect the ending you ultimately receive.

Despite having three potential endings and a façade of more meaningful choices than there are, the story arc is fairly linear up through certain points in any case. Not much is gleaned from a second and third playthrough, so it is up to the viewer's curiosity to decide whether pursuit of additional endings is worthwhile. Only the mouse is needed for the game. For some puzzles, clicks in specific areas are needed, but the elements do not change or interact midway through, making pushing a series of buttons a slightly more interesting experience. All in all, while it may not be out of this world gameplay (pun intended), it will satisfy voracious consumers of point-and-click games for a lunchbreak.

Eh, the ending choice was a bit predictable, though not really justified.

A really good post, very thankful and hopeful that you will write many more posts like this one.

How to Improve Speeds When Gaming with a VPN

1,904 Views
0 Comments
Dimitri— Keep getting annoying slowdowns when gaming with a VPN? Here's a list of 6 things you can try to increase your VPN speeds. We tested them all and they worked.  ...

3,345 Views
9 Comments
chrpa— Jayisgames needs your help to continue providing quality content. Click for details Hi! Another week is over, another Weekday Escape is here! This week we start with two Amajeto's escapes, both one-scene and full of puzzles. Cute escape by...  ...

1,917 Views
0 Comments
chrpa— Jayisgames needs your help to continue providing quality content. Click for details Welcome to Mobile Monday! This week we start with Hirameku's a clever crossover between RPG and a puzzle game. GBFinger Studio added a new game to their...  ...

4,986 Views
4 Comments
chrpa— Jayisgames needs your help to continue providing quality content. Click for details Another Friday, another big good escape arrived! Only a week after a version for mobile devices (MM N°287) Ichima Coffeedo released a version for browsers, too. After...  ...