IndieGoGo: Imagination is the Only Escape (Luc Bernard)

When I first learned about the IndieGoGo campaign for Luc Bernard's Imagination is the Only Escape, an action adventure about a young Jewish boy named Samuel during the Holocaust, I made my Marge Simpson noise. You know the one. Mmmmmrrrrnnn. Not because I believe games about the Holocaust shouldn't be made, necessarily, but because I believe a game about the Holocaust would be incredibly difficult to do properly, and I could already hear the ominous, angry wasp-like hum of people bridling at the thought of it. This is, of course, more than understandable when dealing with an event like this, and even more so since the knee-jerk reaction to the concept of a videogame is something that's "for fun". But Luc wants to focus on creating a game that doesn't glorify the perceived fun and glory of war, and instead deals with the human element in these atrocities, hoping to touch players in the same way films and books have. Tough row to hoe? To say the least. 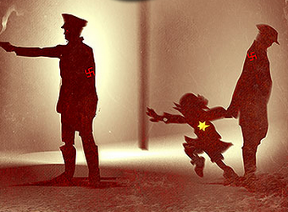 Imagination is the Only Escape follows Samuel as he's smuggled out to Southern France during the mass arrest of Jewish people in Paris that took place during July in 1942, during which time his mother is shot and killed. Passed off as a Christian orphan when he arrives at a tiny village, Samuel meets a talking fox who promises him that by helping her, he can see his mother again. Heavy stuff? Sure, with a bit of a whiff of Pan's Labyrinth and Ni No Kuni about it to boot. At the moment, information on the actual gameplay is frustratingly vague, since "educational action adventure" is a big umbrella that doesn't really tell you a whole lot, and the project pitch video actually calls it an "interactive experience" which is even vaguer. When dealing with topics like this, you're inviting a myriad of opinions on how or even whether it should be done, and of course the question of who is going to be involved with crafting the game matters when the overall authenticity and heart of the game could be impacted by, say, whether actual Holocaust survivors or their families were consulted on their experiences.

Apparently, Samuel will be helping Renard restore peace to the surrounding forest, as his imagination takes hold and crafts a world around him presumably drawing on his real world experiences for symbolism. If the artwork is anything to go by, the game has both a stunning and yet eerily surreal look that would fit its concept. Whether that concept is one players will embrace is another thing entirely. It's true that by being an interactive medium that forces players to take consequences for their actions and live through the characters they play as, games have the potential to make you feel extraordinary things and immerse yourself in another perspective in the way few other things can offer. Luc claims he wants to change the industry and make people realise games can be used for more than just "child's entertainment", and hopefully in the near future we'll get a better idea of how Imagination is the Only Escape could go about that. (As well as a breakdown of how the funding would be used.) If it sounds interesting to you, check out the official IndieGoGo page!

JayisGames.com IndieGoGo picks are selected based only on personal evaluation and perceived overall quality of the project. We assume no responsibility for failed projects or developer's inability to deliver. Donate with care! Contact dora AT jayisgames DOT com with IndieGoGo in the subject line if you find a project you think we should know about!

I'm sure I heard about this game a few years ago, did he try to release it before?

His pitch video says he's been working on it for years, but hasn't been able to get funding for it because nobody would touch it.

Yeah, I first heard of this game on the Extra Credits episode on 'Facing Controversy. They mentioned how Luc Bernard originally wanted it to be on the DS (they even had some concept screenshots), but Nintendo rejected it.