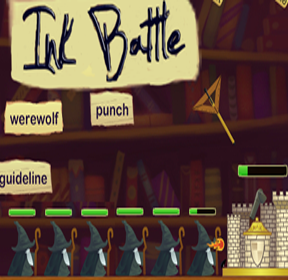 Attention all bibliophiles: One of your worst fears is coming true! There's an attack being staged on books by some brainless dope who left an ink bottle open in the library and now the long prophesied war between books and ink has arrived! Hah, kidding! Well, only slightly kidding. In Ink Battle, an addictive typing tower defense game by Hyptod (also the creator of Alxemy), sinister ink blots are on a single minded mission to destroy any and all books. It's up to you to use those years of typing skills you've amassed to stave off this most horrifying battle.

The way the game works is simple and part of what makes it such a blast: Through twelve levels you must type the words shown on your screen in the comment box as quickly as you can then hit enter. The more words you type correctly the more mana you get which in turn allows you to build up a bigger defense. After each victory you receive money to purchase upgrades with, and ultimately the more you buy the better equipped you are to defeat those darn blots. To use your boosts and units you need only look at your mana bar to find the name of it then type it in and hit enter.

Despite the delightful fun this game provides it does have a drawback: There's only one level of difficulty. While this doesn't detract from the overall fun of the game it does make it much shorter and less challenging for those people who you would think were born with a keyboard attached to their fingers. However, how fast you can type is only a small facet of the areas that deliver entertainment. It's enjoyable to see how many words you can type before you destroy the other tower, it's maniacal laughter worthy to see how many Special units you can have on the screen, and with each different upgrade you'll be hard pressed not to crack a smile at the different forms your Special battlers will take. After all, who doesn't want to see an Armored Gandalf show up like it's the Battle of Helmsdeep and he's got a missile made out of rulers and pencil to back him up? Silly ink blots, you shall not pass!

That was fun once I realised what I was doing and then stopped spelling armoured the correct way with a "u"! A little short but I agree the animations were smile worthy.

Short, sweet, and completely adorable. My favorite bit was the spartan warrior marching off to destroy ink.

yaddab...ha!! ME TOO!! Even though I'm American, I read so much that I always spell those words with the "proper u". I kept yelling "But it WAS the right word!" at my screen!! haha...still, super cute and fun. Hope they will add a level pack. That was as good as the one with the spiders...sorry, brain block.

That was adorable. I wish there were a "hard" mode for those of us who type super fast, though.

So adorable! And it seems like a good way to get your wpm count up, haha.

I usually suck at typing games, but I beat that one pretty quick and easy, so yea the difficultly could have been ramped way up!!!!

Hm, I don't know what I'm doing wrong. I don't get any points and I'm actually not that slow oO
Just to get this straight - you have to simply type all the words. And then what exactly is supposed to happen? The bar on top of the screen has to fill up and something has to protect the book on the left?
Am I missing something? The ink blobs just keep coming and destroying me :(

Well, forget about that. Whatever I just did, it works now xD

@loversrequiem: You type the words that you see on the screen in then hit enter to earn mana. The mana bar at the top of your screen shows how much mana you need to accumulate in order to use one of your defensive guys. Lets say you want to use a Special. You type in as many words as it takes to earn the mana for one, then when the bar is full you type special and hit enter. Then that guy should come out and fight the blobs. Same goes with any of the other defensive stuff. In short: You type in the name of the defensive unit you want to use once you have the amount of mana needed to summon it.

Cute little game. Interesting bug: beating ANY level will advance the next available level by one. I haven't tested it, but this might make it possible to beat the game by playing the first level a certain number of times.

As a fast typist, I found this way too easy.

I just put all my money into the "Strong" skill until it was maxed out and then got the Special Units. When that was done, I maxed out "Armored" and had no difficulty whatsoever with finishing the game. I never even purchased the Shooter or the Turret.

3,568 Views
0 Comments
chrpa— Jayisgames needs your help to continue providing quality content. Click for details Welcome to the Roundup 43 with three games! As mentioned in the previous roundups, only odd-numbered episodes are featured since even-numbered are for Robin Vencel's patrons. More...  ...

How to Get Started in Game Streaming in 4 Steps

946 Views
0 Comments
jayisgames.com— Game streaming is not only an interesting hobby but quite a profitable one: the revenue from game streaming reached $9.3 billion in 2020 already, with 1.2 billion active viewers worldwide....  ...

541 Views
0 Comments
jayisgames.com— Today, kids come into contact with tablets and mobile phones early. So small and curious, they quickly learn to unlock them and discover various things to click on. The most suitable way to channel their curiosity and spirit is to...  ...

1,903 Views
3 Comments
chrpa— Jayisgames needs your help to continue providing quality content. Click for details Hi! Weekday Escape and Weekday Puzzle are here! This week we start with 100yen's short game and continue with Akatsuki no Yado/Norm-Nois escape from a series of...  ...