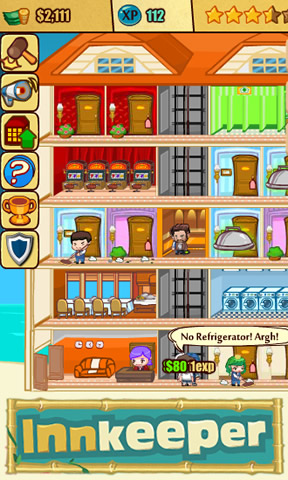 If life gives you lemons, make lemonade, and if life gives you a reputation for an infestation of evil preternatural vampiric creatures, make a resort location and capitalize on the notoriety. Specifically, the family who star in Innkeeper are dealing with the legend of the aswang, a kind of demonic beastie from Filipino culture. They're also dealing with building and outfitting rooms, upgrading amenities, attracting customers from rednecks to Men in Black, and dealing with all kinds of hotel simulation gameplay you would expect. Can you help them take it all the way to a five star rating?

Unlike most sim games that are set in a make-believe, generally vaguely American world, Innkeeper is emphatically set in a real place: Siquijor, Philippines. This is perhaps the most significant aspect of the game. As you progress through the game, the character Hilaria gives you a rundown of the various types of aswangs in Filipino lore, but you'll also pick up quite about the country just by reading the short bios of each family member in the information section. Without taking itself too seriously, the game manages to satire both Filipino internal society and its international reputation. The game also delights in references to other Flash gaming hits and internet memes. This gives it a good balance of local color and global appeal.

Getting a really excellent simulation game within the confines of the typical Flash game dimensions is tricky, but Innkeeper wisely keeps the overall scale of the game down, with a maximum of six floors even at the very end of the game. The excellent, although unskippable, tutorial does a good job of explaining the complicated but efficient interface, and the game makes a great use of space generally. Some balance issues remain. Although the developer has tweaked some of the random chances, the relative difficulties of the various quests remain uneven. The room service area is particularly bad, largely because there is only one elevator and so deliveries get held up. However, this doesn't detract from the game's essential fun. Only one mystery remains: why do all the guests leave the hotel before nightfall? Maybe Sequijor really is a creepy place.

I got tired of pulling up the information for every customer over and over again while I was making and furnishing rooms, so here's a chart I made of the customers' preferences:

I hope it helps!

Siquijor is in fact a creepy place. I'm trying to cook up a reason to go there, but I'm afraid no one would come with me...

I'm excited to try this game, just can't right now. I wish more game developers would get into their own cultural elements, it's not all elves and mushrooms.

How do I get those elusive hipsters into my Inn? I reached all other achievements, had 5 stars, a 100% satisfaction rating, heaps of cash, and more experience than I could ever use. But not a single hipster had entered my humble Inn. Sigh.

They go to places no one likes, so you have to get 10 zero star ratings for them to start showing up. Easy way is to restrict all of the rooms; everyone gets fed up at the receptionist desk.

Adorable game, but I can't seem to get Juana! None of my customers want to say anything about my room service. I've tried switching up my servers but no dice. Any tips?

@nervositygirl: I had that same problem. As far as I can tell, all it takes is patience.

Does anyone know how to get the last achievement? It says "Kill 15 customers"...I feel like I must have missed something?

I have managed to make the game unwinnable because of the hipster sidequest. CURSE YOU MIB MEME!

I'm a Filipino and I approve this message.

I'm Filipino and I have now approved and finished this game. A quality example of the Filipino culture, this game shows competition, the marking of seasons, the diversity of cultures, and the family-run business. 5 mushies.

To attract hipsters you need to:

target your marketing towards them. You can use filter points to increase the probability they will visit

To attract Hipsters for real

you need a -10 approval rating. so use the above method of restricting all rooms, limiting customers to only the basic rooms, and closing all shops so you dont lose too much money each day. after you get pretty negative with your approval rating, hipsters will start to appear. then just use your filter points to attract more of them.

The method I detailed also seems to work. It only took 3/4 turns once I realised. And that's "for real" too :)

Your method is great for getting more hipsters into the hotel, but the first hipster won't enter until you've received at least 12 Zero Star Ratings. So technically, you're both "for real" ;)

I couldn't have noticed my approval rating was negative then.

This may have happened to me before :D

cant seem to get how not to have negative ratings and money. as i progress thru the game my ratings hit 70 plus then started to decrease. anyone knows how not to get that?

Pay attention to feedback from your guests (especially Upper Class guests) to find their likes/dislikes which will affect their overall rating.

Start out by checking their favorite furnishings and amenities. Guests will like their rooms better if they're surrounded by their favorite items, but they will dislike a room if it is missing an item they want.

Next, build rooms with as many available furnishings as possible. Try to organize the rooms on each floor by the items you buy for it, which will make the next step a little easier.

Click the reception desk to view the Lobby tab. Set the "Priority Floor" and "Priority Room" for each guest so that the receptionist will know to send specific people to the type of room you designed for them.

Also, don't forget to upgrade your amenities! The higher you upgrade an amenities building, the more your guests will enjoy their stay when they visit those locations. Happy guests means more money and better ratings, which brings in even more visitors!

It's also important that you keep your hotel nice and clean. Have all of your family members assigned to work. If things are messy or it takes a long time for room service to reach a customer's room, they will get angry and lower their rating.

If you're still having a hard time, try using the upgrades to your advantage. Click the Upgrades tab, then put points in the "Aesthetics" tree. If you earn the Potpourri upgrade, all customers will give you a slightly higher rating.

Last but not least, always pay attention to marketing. Don't let your ad promotions run out! TV ads especially are a great way to attract guests (and their moola) to your hotel.

Hope that helps a little :)

thank you. i changed my servers to the fastest ones. how do i get a sixth floor?

never mind i got it. thanks so much.

You have to destroy ("bomb") a room while it is physically occupied with a guest. Rooms that are bombed but the guest is somewhere else (like at an amenity) don't seem to count towards that score, and you simply receive 0 stars for that person at the end of the day.

You'll know if you've killed someone for sure if when you bomb the room, there's a scream and a little soul appears briefly before evaporating.

The game play is nice but it seems to continually drop my progress. I have tried to manually save and using the automatic saves, both when I reloaded took me back several half stars and achievements.

Is this one of the Department of Tourism's ways to get more tourists??O_O

Nevertheless, this game is adorable. It makes me rather proud to be a Filipino.

If you aren't a native/don't speak the main language of the Philippines like I do, you might not understand some things. There are a lot of things I guess only a Filipino can really understand. /shrug

"emphatically set in a real place: Sequijor, Philippines."
It's Siquijor, not Sequijor :)

Hi CandyCorn, being logged on here to comment doesn't have any effect on your local Flash save storage. You may want to make sure you have allowed the jayisgames.com domains in Flash settings to store enough data on your laptop, or Flash will be unable to save your games. Just right-click on the game and choose Settings to change the storage settings.

I got tired of pulling up the information for every customer over and over again while I was making and furnishing rooms, so here's a chart I made of the customers' preferences:

I hope it helps!

To kill costumers, you need to make sure that the customer is in their room and then demolish the room. I think it waste money buuuuut... you need the award to feel like you finished the game! LOL

I thought this was a cute game, but I found some interesting bugs--

... to get hipster's early--doing this after getting rednecks worked out great--you're hotel costs are low, and you have ready cash.

Some advice to people who are having a problem at Juana: don't use marketing for a few days. If you have fewer customers, your room service will reach them faster.

Uh-oh... I restarted my game in order to get the hipster early in the game. However, when
I manage to get to the seventh half star with only three family members!! Nanay Liwayway, Andres and Hilaria. Honest. Now I can't seem to recruit any of them any more. No dad, no ate marikit... how do I get them back?

I'm stuck because my game won't let me reach my second half star. I don't know why but it never registers when I put in a new amenity. It's always stuck on: "Upgrade Amenities 4 times. 0/4" It's sooo annoying anyone got any tips??

Thanks for making the chart. But for some reason, the 'Likes' for my customers seem to be different than the ones listed in your chart.
For eg. The Celebrites, Socailites and Pensioners listed in my game's Info all like 'Mirrors' in their rooms.

Is it different for all games, I wonder? @[email protected]

People might get confused when they try to get the ' kill 15 customers' achievement to do so you need to bulldoze a room a customer is in as if the bedroom .

i don't understand what i'm suppose to do when the game tells me to fully furnish 12 rooms for the sixth half star. could someone help?

I have been in negative territory for a long time and I've been losing money what do I do??