You might think that if a large, priceless statue is stolen in a cruise ship the police would simply prevent the ship from docking and conduct a thorough search until they find it. But where would be the fun in that? Where would be the opportunity for hidden object searching for clues in tourist locations across the Mediterranean? Maybe Italian police really do handle things differently. In Insider Tales: The Stolen Venus 2, a new adventure game from Intenium, Detective di Porta indulges in a little pizza making and even surreptitiously enters a Greek archaeological site on her leisurely course towards nabbing the culprit. 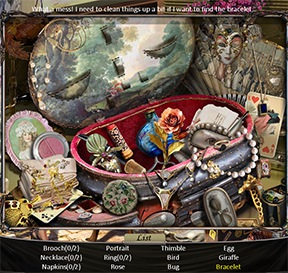 Your cursor is your friend here. Sparkly areas might be hiding hidden object scenes, where you'll be given a list of objects to find. Sometimes you'll have to manipulate the scene by using an object on an area in order to uncover more hidden objects. You'll usually receive an inventory item from a successful hidden object scene, and you can also pick up inventory items in regular scenes. Watch out for your cursor's shape changing to indicate if you can pick something up or zoom in on it. Most of the puzzles are solved entirely by left clicking with the mouse, but occasionally, usually for tile swapping and assembly puzzles, you may need to right click to rotate pieces.

Analysis: If you're getting sick of hidden object adventures where it's always midnight, the crimes are disturbing and probably occult, and the "happy ending" is stopping the serial killer at his seventh human sacrifice, this light and frothy cruise ship romp might just lift your spirits. True, it doesn't have the big budgets of many other series, but it's done pretty well in prioritizing. The art is clean and crisp and easy on the searching eyes. I've played enough games with horrific voice acting not to feel like I'm missing much by that missing feature. The length is fairly decent as well, between three and four hours, depending on how much you use skips and hints. 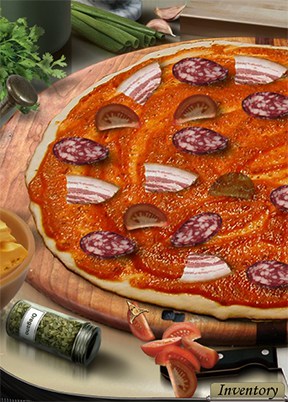 The game's big drawback is some sloppiness with the writing or perhaps the translation, with some glaring mistakes. Not only is this unprofessional, but in a few cases it actually causes confusion. At one point, the detective is presented with what appears to be some boxes under a tarp. I tried clicking on it. "I can lift it with my bare hands" said the detective. But nothing happened. I tried clicking again. She said the same thing. I was worried I had hit a bug and consulted a walkthrough. From context, she should have been saying "I can't lift it with my bare hands" and it ought to have been a clue to find some other method of lifting the tarp. The game also is fairly light on instructions for solving puzzles. If you're the kind of person who considers figuring out what to do to be part of the fun, this will be a feature and not a bug, however.

Insider Tales: the Stolen Venus 2 doesn't do anything Earth-shattering. You're not going to be rushing to write about this in your diary or kept up at night by dreams about it. In fact, in some ways it's a nice trip down memory lane to the kind of hidden object game that got me hooked on the genre in the first place, before success brought the big budget hits that aimed to tell huge, sweeping stories with gorgeous art, amazing soundtracks, and often, huge amounts of creepiness. It's nice to know there's still a place in gaming for a humble little stress reliever like this one. (Although the identity of the villain is a little bit creepy... did not see that one coming.)

Cursors and Other Help

Left Side of the Crime Scene Room

Right Side of the Crime Scene Room

Right Side of the Fountain Scene

Time to Make the Pizza

Turn on the Mixer Mini Game

Behind the Bar Hidden Object Scene

Side of the Ruins

Side of the Ruins Hidden Object Scene

Left Side of Museum

Right Side of Museum

At this point, for me to even consider getting another hidden object game, the words "perfect" and "flawless" had better show up multiple times in the review.

Cursors and Other Help

Left Side of the Crime Scene Room

Right Side of the Crime Scene Room

Right Side of the Fountain Scene

Time to Make the Pizza

Turn on the Mixer Mini Game

Behind the Bar Hidden Object Scene

Side of the Ruins

Side of the Ruins Hidden Object Scene

Left Side of Museum

Right Side of Museum

I am stuck on the pizza. I dont know how to spread the sauce.

can't seem to move the switches to turn the fans off the code should be 3,1,2,4 it will not budge anyone please help you can post or email me help

Tysha -
Check Chapter 3 in the walkthrough above. There is a section on assembling the pizza and shows a screenshot of the sauce being applied.

Allison -
I remember having that problem with one of the profiles I played, but can't remember how or if I solved it. You need to trigger the task, so here are a few things to try. Hope something works for you.

Your goal is to get him to take his coat off and go check out the messed up display so you can get his keys to open the cellar door.

What is the sequence of the lights on the mixer? I can't seem to focus on them long enough to get them right

Mixer Mini Game - check the screenshot under Chapter 3 in the walkthrough highlighted in blue above.

i am stuck with the hammer breaking the bottle with the ship in it! The hammer wont break the bottle ive tried several times PLEASE HELP

Byrd -
Wish I could help you with that one. I played with several profiles and had no problem breaking it. There is nothing to trigger since it is a HO scene. If the hammer is still available, you may need to just start over. :(
You can contact tech support where you bought the game and see what they say.

I am stuck with the Liner chapter..with making the pizza..the salami,ham,mushroom and tomatoes are just not sticking??WTH am I supposed to do to make them do so?

Have a look at the walkthrough above the comments. Chapter 3 has a section called "Assembling the Pizza" with instructions and screenshots.