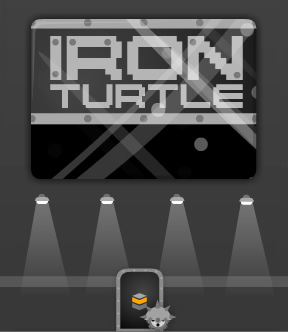 Is there anything turtles CAN'T do? They can win races. They can duck and cover. They can even become pizza-loving ninjas! And now, in Iron Turtle, the new platformer from JJ Wallace, we see that they are also capable of working their way through magma-filled factories in a timely manner. With your help, of course.

There's no story behind Iron Turtle, instead it's right down to business with places to be and atoms to collect! Move the turtle with the [arrow] keys, use [up] to jump. Your goal is to make it across 26 levels in the fastest time possible. Each level is named after one of the first 26 elements in the periodic table, and is labeled with the element's name, symbol, and a brief description. Collect the green atoms scattered along the way to remove 5 seconds from your time, but each time you die, you add 5 seconds to your total time, and must feel forever guilty about making the poor little Iron Turtle die in a violent, fiery explosion. There are 4 different levels of difficulty, although all but the hardest setting will deduct points from your final score. There is also a bonus level hidden in the game that looks like something straight out of Iron Turtle's Adventures In Wonderland, although you by no means have to find it in order to complete the game in a timely manner.

But you can't just dive in and start playing! That's not how Iron Turtle rolls! He has style! Or, he will, just as soon as you choose it. The first screen gives a brief tutorial and allows you to choose from a large variety of distinct shells for the turtle. The next screen will give you an option of three distinct background music styles: slow industrial, fast industrial, and an oddly fitting saxophone solo. The shell will stay throughout the game, but the music can be changed or disabled entirely at any point in the game. In fact, it seems to be almost encouraged, with an omnipresent button in the lower right hand corner, as well as music selection buttons throughout the levels. Moving too slow? Switch to something faster and get that iron adrenaline pumping. Or if you're going too fast and not being careful, maybe you should switch to something a little more relaxing. 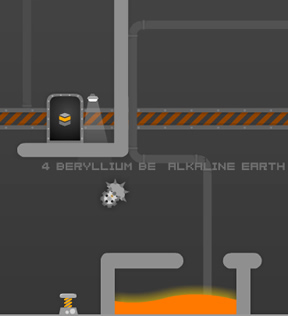 Just like other turtles have taught us in the past, slow and steady is going to win the race here. But not too slow, that's just foolish. Still, there are a lot of hazards that are going to get in your way, including falling rocks, magma pits, and pillars that seem specially designed for turtle stompin'. Move too quickly, and you'll end up getting killed by most of them before you can realize what's happening. Besides, this may be a game about speed, but you're playing as a turtle, so you can't expect for him to be too quick. Once you tell the turtle to switch directions or jump, it will take a second before he responds. This can be frustrating at first, but it actually makes you have to plan ahead, instead of relying on fast reaction times to get through. The levels are full of springs, moving platforms, and buttons that will activate or deactivate moving walls and fans that will propel you to new heights, and mastering the controls is key to using all of these to your advantage.

Analysis: Come on, how could you NOT love this game? It's about a turtle! Everybody loves turtles! Granted, it's a fairly abstract, steampunk-y turtle, but he's still a turtle! Although short in number, the levels are challenging to get through at all, much less as quickly as you can. A rarity in games that encourage speed, it actually helps to take your time and plan things out. The collectible atoms will take time off of your final score, but you have to determine if going for them is worth the time and risk involved. It's an effective system of risk management combined with skill that provides a good incentive for multiple playthroughs. Maximizing your time while minimizing your deaths required a lot of planning and careful timing that can't be mastered the first few times you play through the game. But it's not so hard that you feel like giving up; there's always a feeling that the next time you can make it through just a little faster.

A level select option would have been nice, I would have wanted to be able to practice my speed on certain levels without having to replay through the entire game. The controls were a bit awkward, also, although once you get the hang of them it's not much of a problem. But any shortcomings are overcome by the atmosphere of the game. The industrial graphics are beautiful, and naming the levels after elements is a nice touch, but the music is what really shines through. I'm generally quick to press the mute button once I've been playing a game with the same music for more than a few minutes, but with this one, I actually left it running while I wasn't even playing the game, just to have something nice to listen to. And if you get tired of one song, you can easily switch it over to something else. It doesn't feel like a background at all, but more like an integral part of gameplay. The overall result is a VERY immersive experience. Playing this game, I wanted nothing more than to see my little turtle buddy make it through to the end, no matter how many times I fell into spikes or got squishes into Iron Roadkill. Both of which happened more times than I care to share. Iron Turtle is nothing if not resilient.

A funky little gem of a platformer, Iron Turtle is sure to keep you entertained. Just don't expect to see Nick Fury at the end inviting you to join R.E.P.T.I.L.E. He's not THAT kind of Iron Turtle.

What really made me sad was the lack of a Cobalt stage. I mean, how could you stop one level before the best element ever?

Anyway to mute this? I don't understand why all games don't offer a mute button. This seems to be such a common request. A lot of use like to listen to the radio while playing casual games like this. I can't find a way to turn off the annoying sound effects.

The game is easy as first but don't get used to it. It get's complicated as you go along.

Maybe it was just me and my general ineptitude, but the controls felt unresponsive to me. It would often not register a jump in time, and timing is everything here. The fact that colliding with objects, even at a very low speed, made you bounce back from them added another unwelcome level of difficulty. Trying to jump on top of things was extremely tedious--which I suppose makes sense if you're supposed to be a turtle, but still, I did not find it enjoyable.

Gradual difficulty curve, but it works well. I also wanted a "level select" option. Great music. It's buggy at times - I occasionally went through the floor above me - but not in a way that detracted from the game. I also loved the crazy bonus stage.

Loved this game, especially the representation of levels. The secret stage is quiet wow, though I already expect the doodads JJW will put on it.

Like the game! LOVE the music! Does anyone know the name of the "fast industrial" song with the sample from Mario Savio? I must know who made it and if it is available for purchase/download!

I think that the jumping unresponsiveness is part of the game - You DO play as a turtle!
I was curious about why they named the stages after atoms, however. Guess I'll never find out. :/ Anyways, great game.Incredibly frustrating, yet keeps you going for more and more and more punishment.