Divided into two worlds with their own set of rules, test subjects must find a way to pass the test and accomplished their shared goal. Isolated Subject, by Crneumre, is a platform puzzle game where you must figure out what is the special action in each of the worlds, and then switch between the rules to succeed. Nothing is explained to you, and you must experiment to find out what the secret action is. You only have movement keys of [W] for jump and [S] and [D] to go left or right respectively. In some worlds you can double jump by pressing [W] twice. In others, you can remove blocks by walking into them, and in still others even more clever and diverse tricks exist. Within these worlds is the exit door that must be powered by the glowing blocks. This is a case of a team effort that is spread very far apart in complete isolation. Are you clever enough to figure out the tricks? 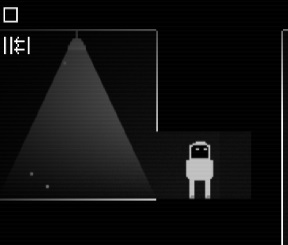 Isolated Subject is a game about experimenting. You have to take some subjects' lives for the greater good of discovering the unique behavior of each level. Upon death, you respawn in the starting point, but what you had created or destroyed in the world stays the same. Only hitting [R] will undo what has been done. Only in a few rooms do you get a hint at what the hidden trick is. When you hit the [spacebar], you can then switch between the world's rules. For example, if you must get on a high ledge, but world three doesn't have double jump, you can hit the [spacebar], then the number two, and now you have the rules that correspond to world two and can easily double jump to your destination. But not all the behaviors are straightforward either. What's great about this puzzle platformer is that it's a balance of two riddles: what makes this world special and how can I use that to win the game? With its eerie music and feeling of loneliness Isolated Subject is not only clever and cunning, but beautiful and involving in its own way.

The embedded link of the title where it says

The secret to level 13 (at least what I'm guessing you're missing) is in the new ability from world 2.

Create a platform under you by tapping up twice while jumping.

This game was not good..........It was PHENOMENAL! I was so blown away. I haven't felt this impressed with a puzzle platformer in a long time. I can not recommend this game enough. Even though it took me over an hour and a half to finish it, I enjoyed every minute of it.

This is great but I am stuck!

level 10 world III I cannot build on the ledge so how do I get to the square/power thing?

1. In the second world, jump up and slide on the ceiling to get to the cube.
2. Connect the first world to the second one and go inside the door.

1. In the second world, jump down below the cube.
2. Connect the first world to the second one and jump on the lower platform. Break the connection to be able to jump up.

1. Walk to the floating cube.
2. Stand above the door, connect to World 2 and jump to make a hole.

1. Jump until the ground breaks and you drop down.
2. Connect to world one and walk towards the cube.

1. Connect to World 1 and walk forward, leaving enough space to drop down.
2. Once in the air, press W to float to the cube.

Double jump to the cube.

Jump and bounce off the platform below.

1. Make your way to the cube by double tapping the UP button while in the air to create platforms below your feed.

1. Climb up the walls to get to the cube.

1. Jump towards the wall on the right and slowly slide to the lower platform.
2. Climb up and grab the cube by jumping on a wall and holding the UP button.

1. Walk to the wall on the right.
2. Connect to World 2 and climb up by jumping off the walls.
3. Break the connection and walk to the left.
4. Connect to world 4 and jump down to bounce.

1. Jump and fall on the lower platform to bounce up.
2. While bouncing up, connect to the second world and bounce off the left wall.

Connect to World 2 and walk left.

1. Connect to World 2 and hold down the UP button until the platform lowers.
2. From the lower point, break the connection and destroy the wall by walking towards it.
3. Drop down and grab the cube.

Connect to World 4 and jump to the wall on the right. Double tap the UP button while in mid air to create platforms below you.

1. Connect to world 4 and jump to grab the first white cube. While in the air double tap the UP button to create a platform.
2. Break the connection and jump on the second white cube and then onto the platform
3. Connect to World 4 and make small platforms to get the cube.

1. Get below the white cube by double tapping the UP button while in the air to create a platform below you.
2. Connect to World 1 and jump to get the cube.

1. Connect to World 1 and pull down the cube in the top right corner.
2. Break the connection and double jump on the lowered cube.
3. Connect to World 3 and jump towards the right end of the screen to come out of the other side.

1. Connect to World 2 and jump to the highest platform on the right.
2. Double jump and break the connection while in mid air, and moving to the right.

1. Drop down and grab the white cube.
2. Hold the UP button until you’re sent back to the starting location.
3. Connect to World 1 and walk to the second white cube.