The era of mechanized servitude under the auspices of Prime Leader Bedlor were thought to be over. But it turns out to be hard to keep one of those squishy meat-sacks down. Now Bedlor is releasing a string of ever-evolving flesh creatures sure to strike fear in any robot's heart equivalent. It's up to super-fighting robot iZBOT to defeat the organic menace, once and for all. iZBOT is a retro action-platform game by Daniel Spruce and Ruxar, where you take control of a fast-moving, double-jumping, wall-sliding hero of cyber-justice as he battles to make the world safe for non-humankind. 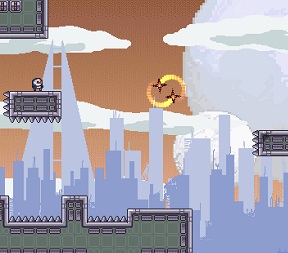 Move iZBOT left and right with the [arrow keys], and slide down walls by holding them. Jump and Double Jump with [s]. Please note that this is one of those game where walking off a platform does not count as a "jump" (because mastering some of the later levels will depend on that fact). Hold down [shift] to sprint (and you'll need to in order to launch yourself over some of those spike beds). Reach the door at the end of each level to progress to the next one. Also, in each level is a supply of "HardToGetium" that you can try to snatch for an extra challenge. Blocking your way are sliding blobs, speeding crabs, flippery fish, flying birds, launching ostriches, all of whom are eminently jump-on-able. Getting touched by one means restarting the level, but there are shield power-ups you can grab to get a free hit, though these shields aren't too good with spikes and lasers. Later levels introduce new elements like moving walkways and teleporters. There are three worlds of 20 levels, plus a boss of each. And trust me, by the end, there's going to be a whole lot of robot-parts littering all of them.

With its quick speed, tight controls, and repeatable short levels with quick restarts, iZBOT probably best fits in the same category as Super Meat Boy and similar "repeated-death-em-up" titles, it has some important differences that distinguish it from the pack. First of all, there is a much gentler learning curve than you usually see from the genre, with a lot of the first dozen or so levels there to properly introduce the mechanics to the player. It never feels like something so blatant as a tutorial, but the challenge level is definitely mild compared to what comes later. If iZBOT is "tough-but-fair", then the emphasis is on the "fair", with ample time given to understand the nature of new obstacles rather than pure finding-out-by-dying. OF course,There'll be more than enough dying later on, mind you, and, as the game progresses, the difficulty of the levels admittedly ends up being a little more erratic than progressive. A nice touch, though, is how remains of defeated enemies remain even after new ones have generated, meaning that levels surfaces can often end up looking very Jackson Pollack-esque. 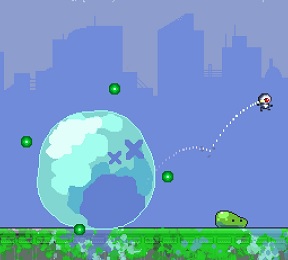 Another element that separates iZBOT from its kindred is the more exploratory nature of the levels. They are all relatively small as levels go. However, instead of a singular path from start to finish, where the challenge often is reduced to a test of timing, here many will have several branches you can take. Maybe you want more spikes and fewer enemies; Maybe you want a less circuitous path, but can stand more enemies in your way, and so forth. It's level design that generally doesn't punish you for wanting to look around a bit, and I can appreciate that (even if there are still a few "leap of faith" situations where you are forced to run at a gap and hope for the best).

The aesthetics definitely hold up to the rest of the game's potential too. Graphically, the sprite-work is crisp and clean with a stand-out being iZBOT himself who flips and moves with a sparkling charm. That said, a greater variety of backgrounds would have been nice to keep things from feeling a little flat from repetition. The chiptune soundtrack is nicely retro and mechanical, though I will say many of the tracks will start to grate if you've been trying again and again to get past a particular spot. Overall, though, iZBOT may end up feeling a little on the short side, but it'll be time well spent, and the game's message is definitely Courtney Gears-approved.

Windows:
Get the full game