Jamestown: Legend of the
Lost Colony

Rarely are there arcade shooters as epic, gorgeous, playable, and steeped in story as Jamestown: Legend of the Lost Colony. A release from Final Form Games, Jamestown: Legend of the Lost Colony combines stunning pixel art with a vertically-scrolling top-down shooter (shmup), all set in a 17th century colony on Mars where Spanish Conquistadors have teamed up with native Martians to keep the new settlers away. What you end up with is a superb arcade game that's easy for beginners to get into but still a challenge to master. 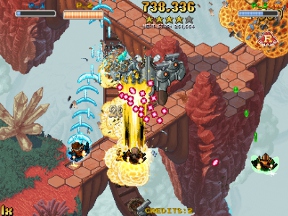 To an outsider, "bullet hell" shmups such as these look like games filled with swarms of bees you have to somehow maneuver around. Jamestown: Legend of the Lost Colony preserves that same intense look, but in practice, it's oh-so easy to play. The mechanics focus on three main moves: regular attacks, special attacks, and "vaunt". Vaunt is an ability that can be activated after collecting enough gold from defeated enemies. Hit the trigger and a shield pops up, clearing nearby bullets but also giving you a damage multiplier. While vaunt is running, your score is also doubled, so the key to getting a spot on the leaderboards (which is kind of what Jamestown: Legend of the Lost Colony is all about) is to keep vaunt active as long as possible. See? Much easier than marching through a rainstorm without getting wet!

Jamestown: Legend of the Lost Colony supports up to four players on the same computer, so if you've got enough gamepads, keyboards, and mice available, you'll have an awesome time with your pals. You are given a choice of four ships that can be unlocked from the "shoppe" after picking up enough coins. Each ship plays differently and allows you to customize the experience according to your own style. Want to barrel straight ahead and shoot big guns? There's a ship for that. Prefer to play it tactical and strike from any angle? There's a ship for that, too! 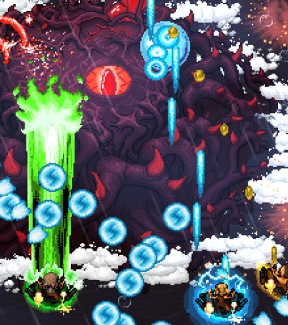 Analysis: Jamestown: Legend of the Lost Colony was designed to be accessible. Instead of catering to the small but strong legions of shmup fans, Final Form Games created a game that would bring new players to the genre and show that shooters are more than pixel-perfect dodging, swarms of enemies, and nigh-impossible bosses who will destroy you in a single shot. That's where you, casual player, have the lovely invitation to come in, sit down, and enjoy!

Even though Jamestown: Legend of the Lost Colony is open to all players, that doesn't mean it's a walk in ye olde parke. Almost half a dozen difficulty levels allow you to choose just how devilish the game can be, starting with "normal" and going all the way up to "judgement". Normal is great for most casual players and anyone who isn't confident with their shmupping skills. Everything else is there for experts and people who want to master the game inside and out and keep challenging themselves after weeks of play. Replaying levels and getting a better score is also a key factor in the game, as the campaign ends after a handful of levels but encourages you to go back and aim for perfection.

Jamestown: Legend of the Lost Colony is never boring. It's also never insanely over-the-top difficult (unless you want it to be!). The story progresses after each level and is wildly interesting thanks to its mix of history, science fiction, and, well, aliens. The soundtrack is even phenomenal, featuring an orchestral score by the classically-trained Francisco Cerda. Jamestown: Legend of the Lost Colony is one indie game that's got something for everyone.

Linux:
Get the full version (Desura)

This game is fantastic and everyone should buy it.

The story, art and especially the music are all beautiful, and the gameplay is well refined.

Additionally, it has the best support and ease-of-use for multiple controllers I have ever seen! I am a controller junkie, and every single thing I have plugged into it has worked, which is amazing. This includes hot-swapping (!)

This is especially amazing in the wake of a legion of new games which say they are "controller enabled" but really only support Microsoft's (comparatively terrible) XBox 360 controller through XInput.
Big name game developers, please stop doing this. I'm not buying your games when they don't support generic controllers as well.

There are quite a few extra challenges available for people who haven't had enough (and they are not trivial). It's also worth noting that you have to raise the difficulty level to reach the hardest (story mode) stages, which will annoy some people.

Newly released DLC adds another 3 unique ships (4 if you include the "random select" ship) to the 4 already available, doubling the roster. The one piece of DLC available is actually pretty cheap, but you don't need it for anything if you're anti-DLC.

This game is best played with friends, on the same computer. Pure bliss.

Trying out different combinations of ships with friends is a lot of fun, the kind you don't see much in modern day videogames.

It's also available on Steam.

Oh, thank goodness this was reviewed! Maybe I can get some help now...

I bought this in the last Humble Indie Bundle. Now, I've been pretty excited to play it, but I have a problem--whenever I start it (under Steam, using Windows), the game behaves as though I'm holding down the mouse button... ALL THE TIME. As in, I can't view the entire opening cinematic (since it has the option to 'click to skip', and the game behaves as though I am clicking the mouse button over and over and over ad infinitum), and if I simply mouse over the quit button on the menu, it quits.

It's rendered it completely unplayable, and I have no idea what the problem is!

Just in case you're unaware, you can download a 360 controller emulator and map the buttons of your controller to it in any fashion you like.

That's how I play Assassin's Creed on my PC using my Playstation controller.

I as well purchased this and the soundtrack during the Humble Indie Bundle, and am very glad I did. I wasn't sure at all what type of game it was, but a video preview later and I was all set to play. I'm using a MacBook Pro running OS 10.6 and using the PS3 Dual Shock controller through BlueTooth, and it runs beautifully, even hooked up to the big-screen TV. This easily is my favorite of the bundle, and with titles like Super Meat Boy and Cave Story+, that is saying something... (For other games, I'm running a program called Enjoy to map the controller to keys.)

This is an excellent game, but if you're a shmup veteran, you may want to start on Legendary, since you can't get to the final level on any of the easier difficulties. It's still quite playable, since the game is generous with extra lives and continues.

Also, the real meat of the game is in the optional challenges. You can stumble through the campaign pretty easily, but the challenges require you to keep a combo going for a long time and flawlessly survive some seriously nasty attacks. I've played Touhou and I'm still having trouble with the challenges.