Joe Danger is kind of a big deal. Not only is he the World's Most Determined Stuntman, he can also leap across shark-infested pools, dodge giant mousetraps, evade threatening speed bumps, and apparently hover atop giant fans. Pretty sweet deal, right? After Joe's initial outing as a console download, the fearless stunt driver has landed on iOS devices with Joe Danger Touch, a fantastic arcade game from Happy Games with tons of things to unlock and plenty of wild rides to pursue. Great mobile racing game, or the greatest mobile racing game? 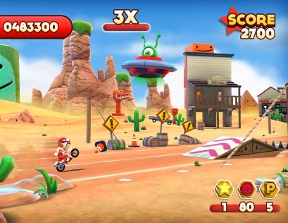 The controls are so elegant in Joe Danger Touch, they quickly become second nature. It's almost a one button game, as you can easily control everything with one finger. Getting all the extras might be a little more involving, though, so don't let the rest of your hand get lazy. Joe starts each round behind a restraint which you have to tap to release. Once he's going Joe powers himself forward, you just deal with making sure his momentum doesn't carry him into trouble. Tap and hold the screen to duck, tap and release to jump. You can also swipe left or right to pop a wheelie, which gives you some extra speed. Swipe while airborne to do a barrel roll—kidding, it's just a spin. But it's fun to play pretend, right?

Each level has several optional goals you can complete, but the only requirement for moving to the next stage is getting to the finish line. Later, though, you'll need to meet certain milestones to unlock the next set of levels, so don't dash through the courses all willy-nilly, ignoring everything you see 'cause you're bad to the bone. For starters, each track is strewn with coins, most of which are within grasp of Joe and his bike. You might have to duck and double jump to reach them, but it's possible, and usually pretty spectacular to perform. You can also land perfect jumps for another bonus, tap to collect letters that spell DANGER, or find the hidden star/secret Happy Games coin looming in the background. Yes, you'll need to divide your attention between scanning Joe's surroundings and making sure he doesn't run face-first into a wall. But without multitasking, where's the challenge? 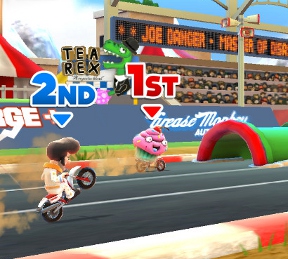 Analysis: Joe Danger Touch combines stunt riding with an arcade racing experience laced with lovely touch-enabled bonuses left and right. You'll be riding along when suddenly a little voice from the corner of your mind says "Hey, I just saw a UFO flying by. Probably shoulda tapped it like two seconds ago when it happened. Just sayin'." Curse that voice and its tardiness, but the more you play, the more prompt it becomes, allowing you to nab all the coins and find all the secrets, which is enormously satisfying.

Some levels require you to have special costumes, all of which require coins to unlock. Coins are earned through regular play, but you can also dip into microtransactions to get a little boost. It's completely non-invasive, and it's actually fun to unlock things on your own, no real grinding necessary. These special costume stages are usually focused on speed and coin collecting, so they're definitely worth completing. Costumes offer more than a cosmetic upgrade as well, each one provides bonuses like increased coin count or a score boost. For wearing a green chicken outfit while riding a bike, there'd better be some sort of bonus involved!

Joe Danger Touch began as a side project that grew into fruition over the course of a few years. The finished product is an extraordinary fit for touch screen devices, you can tell this isn't some lame port with tap controls strapped to the side. This is an honest mobile game with a perfect interface and wildly entertaining gameplay that has you tapping, swiping, jumping and... stunting through level after level. Even when you don't quite hit the goals, you're having fun, but when you do obtain a level of proficiency, the game suddenly becomes ten times as addicting. Joe Danger Touch is just absolutely fantastic.