Wix Games' Jumphobia, also available on your handy-dandy iOS or Android device for a fee, is a puzzle platformer where the only time you can leave the ground is when you step off the edge... but instead of falling, you leap! This means figuring out how to make your way throughout levels that might otherwise be straightforward, or even require some timing and dexterity, without going splat onto some spikes... though, luckily, you can activate the checkpoint flags to respawn there if you do. Use [WASD] or the [arrow] keys to move, and try to reach the exit in in stage... though with enemies, falling platforms, springs, and more, you may wish you could do things the old fashioned Mario way before long. 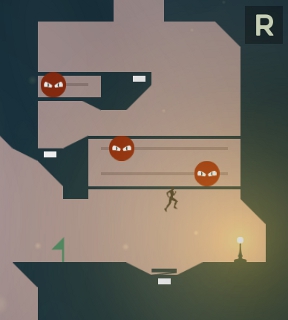 Jumphobia is a simple idea, and, for the most part, a well executed one. Getting used to the game's sprightly, speedy leaps may take some getting used to, since they feel quicker than the basic movement, and working the proper timing into avoiding an impalement could be a matter of trial and error. Thankfully, the game's checkpoints are well placed, and there's no penalty for retrying, so the process feels streamlined to try, try again. The downside is you're essentially playing a standard platformer with the jumping taken out, and it sort of makes you wish Jumphobia would pull a new trick out of its hat in regards to its core mechanics, despite having some very tricky platforming indeed to overcome once it really starts piling the obstacles on. Still, Jumphobia is fun, if a little fiddly, and the enclosed level editor means you can craft your own fiendish nightmarescape of whirling blades and spike-filled chasms for your friends to enjoy, which I'll definitely be taking part in since I've unceremoniously been banned from picking out activities for my friends whenever we go out. Crybabies.

I admit that I did enjoy the moments of smashing the space bar and shouting "jump! jump! you stupid stick figure!"
The difficulty level seemed fairly well judged too - I'm sure many people will have sailed through without too much trouble; I appreciated being able to figure out the tricks and execute them without taking too many attempts. :)

Fun! I couldn't get through all the extra levels though. Some maneuvers were a bit too fiddly, and it temporarily switched from being a puzzle game to a high-skill game.

In the section where the bombs first appear

the blue block at the left goes away when

you get rid of all the monsters. (I don't think I missed seeing a message about that, although I did see such a message in a later level.)

I first thought I had to blow the block up with a bomb. After a zillion tries, I managed to position a bomb _almost_ at the block, and I then I was ready to give up when I thought of trying to blow up all the monsters instead.

After the sign telling you it gets harder, there are only two rooms without sufficient checkpoints, and the first of those is by far the hardest room in the level.
If you manage to get through that, the rest shouldn't be too much of a problem. (Things get 'fiddlier' but with enough checkpoints that it doesn't feel that bad)