The two neighboring kingdoms are on the brink of war and one little frog has found himself stuck in the middle of all of it. However, Kerohiro isn't alone in this battle and with the help of his friends he might be able to save both kingdoms from starting a pointless fight. Kerhiro is ready with his sword held high, but his banner higher. Kerohiro the Flag Bearer by LekChan is a RPG mobile game with a very different fighting style. Your heroes are lined up in a row being led by your direction, which is one by swiping up, down, left, or right. This "snake" of heroes will attack the enemies lines which are also going around the board. Be careful though as enemies will fight back and can be a little unpredictable as they charge around. Every kill you have a chance to get gold or health as well as building up your morale. Higher morale means more damage and when your morale bar is full the leader of your troops will do a special attack. Finish off all enemy units and advance to your next quest. With plenty of upgrades, magic items, enemies, all with different fighting styles, and new heroes to find and unlock Kerohiro the Flag Bearer is one grand adventure. 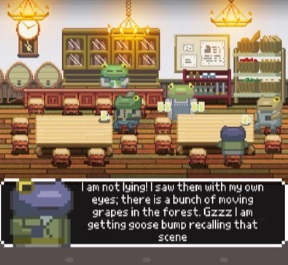 While the battles are heavily influenced by the game snake there isn't any danger of crashing into walls or your own line. You can even walk through the enemy units, but of course both sides will be able to hack and slash anything close enough to it. At first, it seems best to attack only from behind, but as you gain more heroes, some fight better when making a side attack. But that is the same for enemy units too. Appearing in groups of three, the foes therein are randomized so you have to decide which line is best to remove first. The more time that passes though the more baddies appear. So be quick and swift but also smart in your attacks. If you lose a unit they become a ghost. You have to touch them to add them back into your line. They are still dead, but if a crystal drops they can be brought back to life, or if you have unlocked the caves, the ghost will continue on with you in the next level. The caves can be unlocked, like many other mini quests, by chatting with people in the bar. The mini quests will appear on your maps, but when you select them they don't tell you what the adventure is or if it's even the main-quest line or not. That can be a little upsetting when you use up an energy to realize it wasn't the one you wanted to try for. So just pay attention to what the people say as they tell you where and what the quest is. All quests will give you lots of gold and experience so ready your flag because this fight to save the land is just getting started.

Like most phone RPGs, Kerohiro eventually gets very grindy, in an effort to get you to spend money to buy gold. Unlike most phone RPG's, it features a poorly translated story with an actual beginning, middle, and an ending. By the end of the game, you actually do get to

Rescue the princess. This is not currently possible in other phone RPG's like Heroes Tactics.

I found the story charming and goofy, but with horrible grammar.

At higher levels, the caves actually take a bit over an hour for a single run, which is not exactly convenient for a casual phone game. My iPhone 5 also slows noticeably at the higher cave levels, unable to keep up with the huge numbers of enemies.

Judging by the leaderboards, I'm one of about 20 people to actually beat this game. In all, I spent 5 dollars and a few hours grinding in the caves.

Overall, it's fun and unique example of a strategy light phone RPG, that suffers from some major flaws in execution.

The major strategy late game isn't a question of attacking from the side or behind (always attack from behind). The bigger question is whether to level up all your frogs equally or to concentrate on 1-3 of them. My verdict is that you need to

concentrate on just a few. I recommend Lumberfrong and Elora. You need to max out armor and level up to at least level 30 to avoid being killed in a single hit in the final level.

The frog in front determines both your walking speed and your special attack. I find that walking speed is so important, it's best to just put the fastest frog in front, which seems to be Elora. It also doesn't seem possible to increase your frog's speed through the use of Relics, unfortunately.