History is written by the victors.Take for example... our favorite Italian plumber. Oh wait, did you think that was just a classic tale of hero saving a princess from a dragon... turtle.... dinosaur-thing and his army of mushrooms? Well, think again. Kill the Plumber by Keybol and Izzy Aminov, has you playing as the little round goons enemies trying to kill the player plumber character. In this puzzle platform game, you can move the little "goons" with [WASD] or the [arrow] keys to try and bump the overall-clad human and send him falling off the screen to his death. He has his ways of fighting back, of course, with his jumping ability, fire shots, and er... again, he jumps really well. If he reaches the flag or kills you before time runs out he wins. But you don't just have the little goons to help you you also get to visit some of your old-timey favorites such as shy ghosts and thwomping not-thwomps. It's a great blast of nostalgia that is challenging enough that you'll hate your childhood hero and cheer on some of the most weakest video game enemies ever. 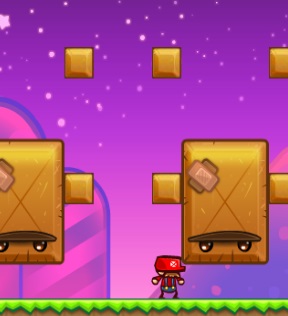 Kill the Plumber plays brilliantly. The goons are slow and weak just as they really are in the game they are making a parody of. Frustration rises as you try to move the ghosts but have to stop as soon as he turns your way, and the Thwomps take their time to raise back up giving him a good chance of running right by if you go too early. But every level has a sure way you can stop the plumber but you can sure bet it's going to take wits and planning. There are different types of goons that will kill the plumber when he touches them, or even some that throw axes, and ghosts can kill him even when they are invisible as long as they are in his path. But if there are multiple units on screen you move all of them together, so if you are trying to move a ghost, you may be sliding a Thwomp the wrong way. It makes every level a new set-up and you really can't use the same trick twice. Sometimes it is quite difficult, and you'll be so annoyed at that manic plumber that passing a level is celebrating the fact you won't have to do it again. That doesn't mean you're not going to enjoy playing this beautifully animated game, however, and you're going to cheer every time you kill that annoyingly smug plumber.

Yesss!!! Hahaha!! This game is fantastic! MattPat would approve :)

Is this made by the same person or group who made that "Toss the Turtle" game? I believe the creator is called Foreverkul.

I don't quite understand how the ghosts work. Is the appearance/disappearance controlled by the player somehow?

Power of posting... It depends on whether the plumber is facing towards the ghost or away.

2,536 Views
3 Comments
chrpa— Jayisgames needs your help to continue providing quality content. Click for details Welcome to Mobile Monday! This is the first Mobile Monday in 2022 and we start the year with three excellent games. No need to introduce the developers...  ...

5,700 Views
10 Comments
chrpa— Jayisgames needs your help to continue providing quality content. Click for details Another Christmas game arrived ex post, this one by Neat Escape, and it is as holidayish as possible. Shining Christmas trees, beautifully wrapped gifts, Santa with reindeers...well, we...  ...

2,533 Views
1 Comment
chrpa— Jayisgames needs your help to continue providing quality content. Click for details Welcome to Weekday Puzzle! Robert Alvarez (rob 1221) latest game is the only one not Christmassy in this WP - it's a math game, and very well...  ...