It seems that a video game generation cannot be truly labeled as "retro" until it becomes possible to accurately re-create it in a browser window. And while games like Dino Run and Super Mario Bros. Crossover have kept the pixel-art flowing online, the gloriously chunky polygons of the Nintendo 64 remain in short supply. At least now, though, there's Kiwi 64 by Marcus Horn, a Unity 3D platform game inspired by those "collect everything in sight" games of yore, and a certain one about a bear named Banjo and a bird named Kazooie, in particular. In it, you play as Kiwi, a cute little flightless bird who just wants to enjoy the sunshine. Unfortunately, the evil King Melon is high atop his mountain, and ready to ruin your day with taunting pieces of verse. But legends have foretold of five magical lamps that, if collected, would unlock power unimaginable! Or at least enough to kick that melon off that mountain! Which is probably just as good! 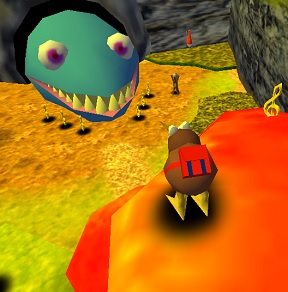 Move Kiwi with the [WASD] or [arrow] keys, jump with the [spacebar], and attack by clicking, either on the ground or in mid-air after a jump. The camera is controlled with the mouse as well. Collect items and fulfill requests made by the inhabitants of the Kiwi 64 world to acquire the five magic lamps and win the game. Kiwi 64 is an awesome tribute to a genre that time has seemed to have passed by, made by a developer who truly understands what gave it such appeal. As a love letter to a very specific gaming niche, it will, of course, be most appreciated by those who played the games it references. Certainly it has all the elements: cartoony characters, breezily humorous dialogue, a few Stop 'n' Swap-esque red herrings (...stupid frozen eggplant), and enough collectibles to satisfy even the most dedicated hoarder. It probably isn't developed enough to win over those new to the genre, but even they will find it a satisfying chunk of fun. While Kiwi 64 is undeniably derivative and relies a lot on novelty and nostalgia, it also has heart, and that's something you can't just cut-and-paste.

I suspect there are only 59.

Also, has anyone been able to

find a use for the bag hanging from the hook

This is a nice little platformer. I know it's just meant as a parody of those old collect-everything games, but it'd still be nice to see a larger version of this with more to explore and collect.

Bluemoose19, the bag on the hook is a reference to Conker's Bad Fur Day; finding squirrel tails on hooks were your extra lives. I'm stuck getting the

sequel out of its cage

There's a red key up the central pillar. Go up widdershins and it's nearly impossible to miss.

I also suspect there are only 59.

Love, love, love this game! I would love to see more N64 spin-offs like this, only more expansive.

Really wish I could get that eggplant!

Is there any way to mute this game? I'd like to listen to an audio file while I play it, so just muting my computer won't work. (I'm using Firefox, if that makes any difference.)

There is in fact only 59 notes -- if you play it on newgrounds, one of the medals is award for getting 59 notes, so that suggests that there aren't anymore, to me.

The creator confirmed in a response to a comment on ng also that the eggplant wasn't actually collectible. It's referential to some of the stop'n'swop items from the BK games, specifically the ol' ice key.

If you can, try and make it out of the borders of the map. Otherwise try getting the camera to kind of clip through the outer walls -- there's some little secrets out there.

Has anyone else found the tardis?

Game failed and was turned off in the opening second (gotta be a new record for me) due to lack of mute function or volume control.

Too bad Unity doesn't have gamepad support. Would make things like this a lot more fun.

As far as muting...Does Unity run as a separate item, like Flash does? I know Flash has it's own entry in the Windows Volume Mixer (right-click the speaker icon in the systray and select 'Open Volume Mixer'), and can be muted separately from Firefox itself. No clue if this helps any, as I don't feel like trying the experiment myself at the moment. :-)

There are 59 clefts in this game. It took Conan 59 attempts to cross the street. Conspiracy anyone???

You can search a downloadable version. It supports gamepad and fullscreen. However, I had to run it in compatibility mode set on Windows 7 (I use Win 7 64-bit SP).
Oh, and of course you can mute that version.

I found some Easter eggs.

If you climb to the top of the melon's perch, find the high rock area closest to you (by the tall tree) then rapidly jump and do your spin move. If you did it well enough, you will be on top of the map. From there, if you head left and peek over the edge with the camera, you will be able to find the TARDIS and a big black alien.