If you ever rolled a dice, attacked the darkness, or hollered for Mountain Dew in your life, then strategic RPG Knights of Pen & Paper was probably right up your alley. It was a loving parody of tabletop gameplay, as you guided a party of heroes through adventures while they were playing the game. Now Knights of Pen & Paper 2, helmed by developer KYY Games, is here for iOS and Android, and it's time to take up your character sheets and roll for initiative once more. This time around, your heroes find themselves dealing with a new threat to the Kingdom... a dastardly Paper Knight who doesn't approve of the ruleset you're using, and is causing all sorts of havoc. After creating your first two characters, you set out to set things right... assuming you can roll a natural 20 or two on the way. With new character classes and creation options like being able to play as human, dwarf, or elf, tweaked combat mechanics and spells, dungeons to explore, and all the pop-culture jokes and loving genre mockery you've come to expect, Knights of Pen & Paper 2 is a fun and faithful sequel that brings a ton of charm and content to the table and keeps the spirit of the original intact. 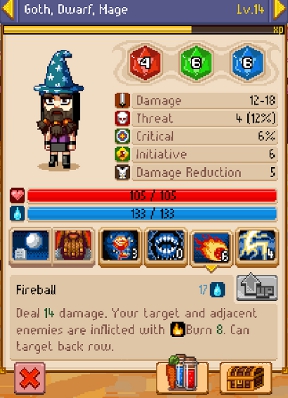 If you didn't play the original game, don't worry... the tutorial will walk you through the basics. You start out with two party members you can make any class and race you want, and each can be one of a group of character archetypes that confers an extra bonus... the Goth, for instance, may be gloomy but she can be resurrected for free, and the Rocker's Heavy Metal passive ability means he won't be penalized for wearing heavy armor. You can unlock more seats for other party members as you go, and you'll even gain new types of classes to create, like the Ninja or the Warlock. Battles are turn based, and numbers next to your party members and enemies will show which order they can attack in. Win, and you'll not only get gold and items, but experience points towards leveling up, which in turn nets you a point you can spend on a character's skills. Each class has a bunch of unique spells and/or abilities, and every point you put into each makes them more powerful and effective. Each location you can travel to, which costs money and needs a successful roll of the dice to arrive at without being ambushed, has its own set of quests to complete, and usually treasure to find. Some locations even have dungeons to explore, but be prepared before you venture in, since you can't rest while inside! 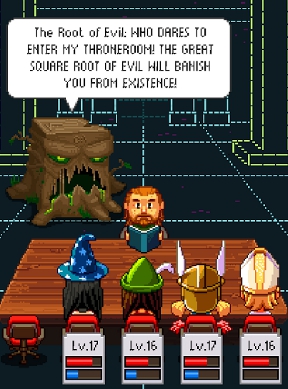 While the basic concept and gameplay are the same, many of the mechanics have been tweaked in addition to those that have been added in. Most spells and classes have gotten a revamp, dealing less direct damage and more status effects, which in turn can be shaken off only with a successful resistance roll. You now can only target enemies who are in the back row if you're using certain spells or abilities, or if you take out the baddies in the front first. More emphasis is placed on buying and equipping weapons, trinkets, and armor, with the inclusion of one and two-handed weapons as well as shields, and crafting is now in the players' hands rather than the blacksmith's, and requires various items to complete the recipes you find. Dice rolls also factor into exploring dungeons, which has you moving from room to room and encountering traps that need a certain dice score to evade, in addition to monsters and treasure. KYY Games have clearly made an enormous effort to flesh out and develop the existing gameplay and concepts behind the original game without compromising what fans loved about it, or going too far and making it into something it wasn't. It's worth mentioning, however, that while the in-app purchases for more gold are completely optional, the sheer amount unlocks, consumables, and upgrades can run you on top of the cost for travel and failing investigations compared to what you gain from battles feels a little unbalanced at times.

Not every aspect of the game feels as developed as you might hope. While initially the dungeons are a nice touch, there's so much repetition in them that they don't hold the appeal they should, and because saving throws are often set so high, your characters fail trap and investigation rolls with what feels like unreasonable frequency, though it might simply be I have a ridiculous amount of bad luck with the random number generation. But even if not all of its new ideas stick the landing with perfect tens, Knights of Pen & Paper 2 should still be applauded for how much it's tried to branch out, and how much it's gotten so very right. Since the writing is so much better this time around, the story is a lot more interesting, and plays with its subject matter very cleverly without relying on the crass humour that could pop up frequently in the original. The game looks great, though whether it looks better is going to be a matter of personal opinion, and the soundtrack has gotten an upgrade as well. I was actually surprised at how well it ran on my HTC One S which is, let's face it, a little long in the tooth when it comes to smartphones, and while others have reported crashes as of this writing on other OSs, KYY Games has been quick about responding to troubleshoot. If you loved the original, Knights of Pen & Paper 2 is going to feel like coming home and kicking off your shoes to settle into your favourite comfortable chair, offering up even more of the nerdtastic tabletop parody action you've come to love.

Android:
Get Knights of Pen & Paper 2

NOTE: This game was played and reviewed on the HTC One S.. Game was available in the North American market at the time of publication, but may not be available in other territories. Please see individual app market pages for purchasing info.