In between all the backflips, the dual pistols, the ancient monsters, the snow mobile chases, and the snappy British banter, it can sometimes be easy to forget that Square-Enix's iconic leading lady Lara Croft is just as much brains as brawn, though turn-based puzzle game Lara Croft GO for iOS and Android is the best possible example we could hope for. Lara's still raiding tombs and ruins, of course, but here she's doing it one step at a time, as you swipe onscreen to lead her pace by pace through isometric levels filled with switches, snakes, traps, and more. Each level's goal is typically merely to get to the exit, but doing so requires figuring out how to make a path and avoid the hazards in the process. Snakes, for example, will strike at and kill you if you pass in front of where they're facing, while crumbled pathways can only be crossed over once before they give way. Be sure and keep an eye out for optional collectibles hidden in glowing jars throughout each area that can be picked up with a tap, and unlock new costumes for Lara to wear. Say... what's that rumbling? 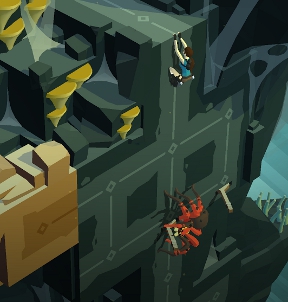 Lara Croft GO is one of those puzzle games that proves you don't need a ton of elaborate mechanics to make a good game... you just need to know how to combine a handful of well thought out ones in ways that are both challenging and creative. New elements, like the salamander that stalks your movement as soon as it seems you, are added at an even pace throughout the game, and figuring out both the rules for each new encounter, and how you can make it work with the ones you've already discovered, feels very rewarding. It doesn't hurt that the game is extremely easy on the eyes, either, with gorgeous environments that manage to feel majestic and ancient despite a relatively small scale, and wonderfully designed character models that animate beautifully. The game consists of five chapters, each with its own set of levels, and even with the optional collectibles is still the sort of thing most players will blast through in a single afternoon. While you might have wished for more, Lara Croft GO doesn't wear out its welcome with a lot of filler, so each level feels satisfying even if they are snack-sized.

Players may be disappointed to see the inclusion of puzzle solutions available only at an additional cost, and the extra costumes for sale are a little silly since they're purely cosmetic and aren't enough to make you want to play the game again just to watch them in action. Do you know what I would have paid for? An optional directional pad control system, since the swipe-based movement isn't always precise unless you make your swipes slow and deliberate. Despite that, Lara Croft GO is so well designed from its well-worn hiking boots to its atmospheric sound that it's easily recommended. Lara Croft GO is a short-ish but smart puzzle game with exemplary aesthetics that would make a fine addition to any puzzle fan's library even if they've never scaled a cliff with its heroine before. It's easy to pick up, clever enough for its titular adventurous star, and packaged as beautifully as you could possibly want.

Now would be a good time to mention that Hitman GO is currently half the price of this, available on Android. So maybe you can buy them together. If you have Android.

I thought this game was a little too short for the price at first, until I noticed I had been playing for five hours straight. It was just the right amount of challenge to keep me going "Just one more try at that one..." but I never threw my phone in rage because it was too hard.

Has anyone figured out a nude code for this one?