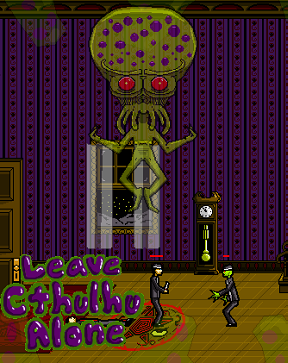 We've all been there... Friday night, just hanging out at your house at R'lyeh dreaming, waiting for your cult leader servant to finally complete the ritual that will grant you power over the alien geometries of the underdarkness, making the very sun of heaven seem distorted when viewed through the polarising miasma welling out from the sea-soaked perversion of your chaos. But then, all these lame-o cops, Miskatonic professors, mystics, and asylum escapees just had to show up and try to ruin your fun. Good thing your very tentacley touch brings the corrupted servitude of madness. Still, you'd think they'd just learn to Leave Cthulhu Alone! In this flashpunk tower defense game from Loserville Express, chilling with the old ones has never been so much fun!

The general goal is to keep the cultist safe from anyone who'd try to stop his ritual. Use the [arrow] keys to move throughout the four rooms of your dread mansion, or use the [1-4] number keys to teleport instantly. When your power meter is full, aim and hit the [spacebar] to mutate your enemies, then again to place them. Different enemies will launch different types of attacks. The power bar refills with time and gets a boost after a successful kill. Cthulhu fhtagn!

Backed by a unique visual style and some hilariously snarky dialogue, Leave Cthulhu Alone makes for a good hour of fun. Don't come looking for serious horror: this is a game based around dark amusement rather than scares. It takes a while for it to get going: the first half-dozen or so levels feel like an extended tutorial more than anything. Once it does, though, there's a nice difficulty curve and the multi-room indoor locale makes for a interesting variation on the genre. Gameplay could have been improved with a pause key, and Lovecraft traditionalists will wonder where Cthully's wings went, but tower defense fans should definitely try Leave Cthulhu Alone. Or should that be "LEAVE CTHULHU ALOOOOONE!!!"?

This game was actually quite a bit of fun. I had quite a bit of trouble after the introduction of the Druid (I will give no gameplay details about those guys, except that I despise them), but the game became much easier, and even beatable, once I discovered that I could move the pentagram with the arrow keys. Needless to say, I felt silly.

Though some trappings of tower defense are there, the fact the resources at your disposal are given to you, rather than chosen, really makes this play a little more like a puzzle game than a strategy game. Though, of course, there's some overlap between the two. That's just an observation more than a comment.
I'm a big fan of the humorous treatment of the fairly direct Lovecraftian trappings though. There's no need to use silly parody names or reinvent the wheel when using the Cthulhu Mythos for comedy. Anything that bold-facedly serious and stark makes for great comedy.

I'm really stuck at the level with loonise running around in strait jackets. I've havent found out what their advantage was except that they seem to replenish my energy bar quickly...