It can be a little tough trying to pin down exactly what boundaries Sierra's Leisure Suit Larry in the Land of the Lounge Lizards crossed when it was first released in 1987. It seems wrong to classify it as the first "mature" game, as it seems series creator Al Lowe would balk at any label of maturity associated with his game, and calling it the first "adult" game would inevitably lead to another discussion of Custer's Revenge (and no one wants that.) Perhaps it's as simple as saying that the exploits of the aggressively uncool Larry Laffer looking for love (or its discounted equivalent) in the decidedly wrong places of Lost Wages, Nevada, was the first kinda-raunchy game that was actually any good. Since then, the series had its ups and downs, though most fans would probably agree Larry lost his way after the release of 1996's Leisure Suit Larry 7: Love for Sail, with the next two appearances of the franchise coming a decade later, in a different genre, with none of the original developers, and both being pretty dire. 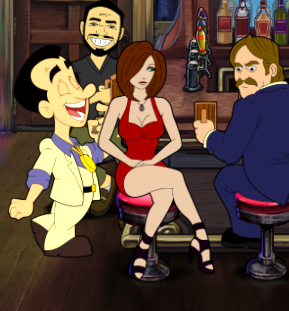 In 2011, Replay Games saw fit to take the leisure suit out of mothballs, acquiring the rights to a remake and the next year, with Al Lowe and fellow Sierra designer Josh Mandel on board, becoming one of the first big Kickstarter success stories, as fans pledged past the far target amount and its bonus extensions (which promised new bits of story and a new love interest to romance). Though it would be delayed until Summer 2013, and its initial release a little shaky, they've worked through the kinks (so to speak), and Leisure Suit Larry: Reloaded has proven itself to be a classic point-and-click adventure delivering all that it's backers could have hoped for.

Using the mouse, select the icons on the top of the screen to make Larry walk to, look at, take, speak to, use an inventory item on, or, uh unzip at, the objects, people, and scenery of Lost Wages, or you can right-click to cycle through them. To progress throughout the game you will need to call a cab, something that can be done at the payphones throughout the game. Many of the places you can go will cost money, so trying you luck either at the casino, or at one of the many video gaming machines is a must. Good luck, and Viva Lost Wages! 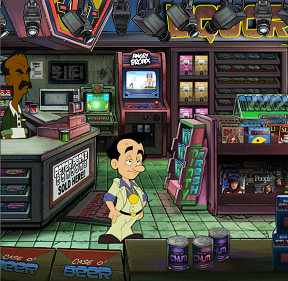 Analysis: Leisure Suit Larry Reloaded is a project that was funded by nostalgia, developed in nostalgia, and has a target audience of the nostalgic. If you are already a fan of the original games, you likely would be already sold on the remake, sight-unseen (hence the KickStarter success). The question then, is, does Leisure Suit Larry Reloaded possess enough charm to draw new fans into the fold? In a word, yes.

The world of Leisure Suit Larry is a bit dated, yes, but to term that as a negative is kind of missing the point: movies and games that were once set in modern times but, as time passes, become unintentional period pieces is nothing new. Leisure Suit Larry Reloaded has the plot structure of an early 80s text-adventure, the humor of a stand-up comedian of the late 80s, in a game format that hit its stride in the mid-90s,wrapped in a package of 2013 design sensibilities, and yes, the hodgepodge of attributes sometimes produces a friction in the experience, as old and new fight for prominence. Such is the challenge and the danger for those who create a game remake that, by the demands of the market and technology, must feature new content, while still closely adhering to the spirit of the original, so as to not alienate those fans without who the game would have never been made. But Sierra games have always been more enjoyable with a walkthrough on stand-by, and a few esoteric puzzles with a little borderline sociopathy and kleptomania are simply part of the deal (though, in a definite change for the better, the game can now never be made unwinnable and, after a death, the game will bring you back to just before you expire, usually with an achievement unlocked. Unfortunately, you'll still need to save and reload to gamble your cash reserves up... have luck-based minigames every been really that enjoyable in any adventure game?) 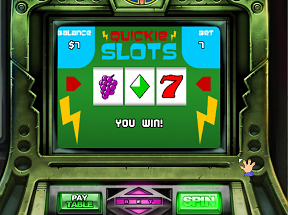 If the result sometimes feels a bit of a mess, Leisure Suit Larry Reloaded has a number of attributes going for it in its favor, and they're the important ones. First of all, the game is hilarious. Nearly every object and every combination has a snarky comment or wisecrack attached to it or several, making for such a mass of humor that its hard to get though any room without a smile cracking on your face. Jan Rabson and Brad Venable, the voice actors of Larry and The Narrator, respectively, have a great comedic chemistry, and their interplay captures the zany fourth-wall ribbing spirit of the best Sierra adventures. No doubt some of the more stereotypical humor should have been left in the EGA era where it belongs, but for all of Leisure Suit Larry's pretensions to naughtiness, you'll find worse in the average issue of Maxim. What's more, the graphics team has certainly earned their pay, with each room given that special brand of glorious sleaze entirely appropriate to Lost Wages, and tons of in-jokes and visual gags to spot. The soundtrack is a perfect complement, mixing between the retro bleeps and bloops of a faux-PC speaker, the jazzy swing of a big band, and the low purrs of a lounge act doing their best in a small smoky room on a Saturday night.

Apparently, Replay Games has begun planning the remake of Leisure Suit Larry 2. This will be interesting to see, as that game was the weakest of the original series, almost being a series of unwinnable situations with a game attached, rather than vice versa. One thing is for sure though: these guys get Larry... the obliviousness, the dorkiness, and all those other attributes that ensure this loser stays just that much more loveable than pathetic. As fine as this remake is, one hopes that it's a trial run for all new Larry adventures. If anyone can do it, these guys can.