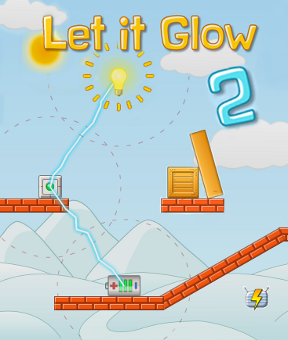 The physics puzzle game has been around long before pigs and birds started battling it out. At its heart, though, is a very fundamental concept—manipulate the physics of the provided objects to solve a puzzle. From an outsider's perspective, that simple-sounding task can appear rather banal. Sit down with it and start toying with potential outcomes, however, and suddenly you're hooked.

Nothing illuminates this truth more brightly than Let It Glow 2, the well-awaited sequel created by Vyacheslav Stepanov who gave us the original Let It Glow. See, it's not enough to plainly move an object from point A to point B or to propel ornithic projectiles toward helpless oinkers; that can be done artlessly enough without much positive results. In Let It Glow 2, you must arrange electropositive activity through conductors, transmitters and batteries to power light bulbs. Click on objects to remove them causing things to fall perfectly into place. When done correctly, the stream of electricity flows accordingly and there is light!

Analysis: It's very gratifying to make that bulb light up: just a click here and there, experimenting with design until all the parts work, fulfills that inner penchant to build and create. The ease of play, cheerful music and pleasing graphics increase Let It Glow 2's appeal. Adding to its affability, most of the twenty levels are not too hard to figure out. Yet enough strategy and tactical planning are involved to present a satisfying challenge. Those "Aha!" moments when a light pops on above your head fuel the compulsion to keep playing. When you get down to gameplay, there isn't much here in the way of innovation nor will you find great stretches in mental stimulation. Regardless, as far as physics puzzles go, Let It Glow 2 competes well amongst the best and, with only twenty levels, it ends long before you'll tire of playing, which is a mark of a goodness really. 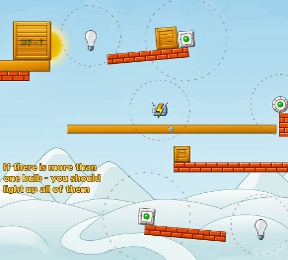 There are those moments when timing becomes everything. Such minute subtleties of physics law can turn into a lip-biting excursion in precisely timed mouse clicks; if that scenario is frustrating to you, then there are a couple levels you may want to skip. Which brings up a small, nitpicking point: there's no level skipping. Ergo, if you don't want to stop at, say... level 13, you'll just have to hunker down and work through the dilemma. That issue applies to almost everything in life—writing, relationships, living—thus a small possible hiccup in play isn't reason to shrug off a game so gratifyingly enjoyable.

When you do manage to charge up that marvelous Edisonesque apparatus, the warm glow of achievement radiates on screen as well as in your dear puzzle solver's heart. While it might be too short lived to inspire tee shirts, plushies and viral videos, Let It Glow 2 does make for a mighty fine coffee break diversion. You might even land on the leaderboard for posterity!

Huh, weird. Volume control buttons appear when this is played in Chrome, but not in Firefox (even with Adblock disabled). What's that about?

Music and SFX buttons worked fine for me in Firefox, were you zoomed out by chance ?

Interesting, a press of ctrl-+ does zoom it a bit and bring the volume controls into screen with Firefox. Well, apologies for the snotty comment, but now I'm even more intrigued. Why should the zoom level affect how much of a flash window is shown?

No idea, I am bubble gum and string fixer not a teckie. All I can figure is zoom zooms the flash window in and out.

Send me back to to my Oric-1 when I understood what was going on :)