"Flappy Bird." Those words tend to be polarizing, so there's a chance you're having difficulty reading this article because your eyes are forcing themselves shut. Some felt the smash-hit brutally challenging yet deviously simple arcade game didn't deserve the attention because of how basic its construction was, while others, well... the incredible success of its straight-forward yet addictive high-score formula speaks for itself. So when Jack Gilinsky and Jack Johnson release Let it Goat! for iOS and Android and call it "the next Flappy Bird", you have to wonder... can lightning really strike twice? Should it? It's the same basic concept, after all, just with creepy vertical demon pupils. (... what? Goats are weird.) You play a prancing goat named Mounty who runs without stopping, and you tap the screen to make him jump over spikes, gaps, and at nighttime... zombies. A single hit, whether it be impalement or running facefirst into a wall, will cause you to restart, so if you gather enough gems, you can buy... a bear. Naturally. A bear who will let you ride on his back and take a single hit for you. Look, I swear I'm not making this up or hallucinating... you can even feel my forehead! 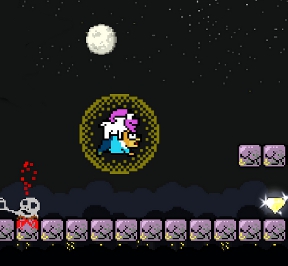 In a lot of ways, Let it Goat! feels perhaps more like Robot Unicorn Attack! than Flappy Bird, albeit decidedly goofier in tone. The tap-to-play mechanic here requires split-second timing, and getting a score into the double-digits is far trickier than you would think. For some people, that's part of the charm, and the silly death animations (and sillier soundtrack) give the game a lot of appeal. The addition of the rideable bear is cute, if a little gimmicky, though it does seem like the game would be even stronger without losing its simplistic core concept by throwing in some more basic unlockables in the form of other rideable animals or visual skins, or ideally new environments. While there will always be people who scorn and sneer at simple games like this, the fact of the matter is, there are all types of people, and all types of games, and there's room for all of them, from Tiny Wings to Canabalt. Look, I shouldn't have to feel like I need to hold a game and croon "You are beautiful... in every single way... " you monsters. Let it Goat! follows in the hoofsteps of others, but its bizarre design and mockingly difficult gameplay could either be the highlight of your day... or your undoing.

Wow, Dora...that whole review, and you didn't make even a single Frozen joke.