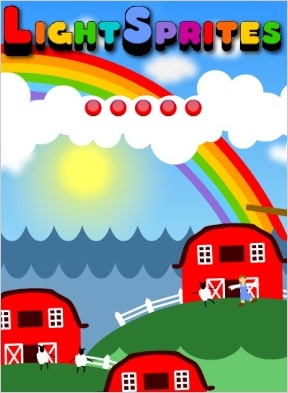 From Hero Interactive comes a physics-based "hit the target" game, Light Sprites. Light Sprites also happens to be the happiest, most rainbowiest game ever made. It contains more dancing sheep/pandas/people per kilobyte than any Flash title ever created, including the ultra-cute Grow clone Poco Parco.

Gameplay in Light Sprites consists of tossing colored orbs from a cloud to hit matching targets on the landscape below. To throw an orb, click on it with the mouse and pull back to increase power, just like a slingshot. You can throw several orbs with one toss by gathering them with the cursor before you release. Hit targets as quickly as you can to score points. You earn bonus points for hitting every target on an object and for taking out several targets with one throw. If you hit a target with the wrong colored orb, bad things will happen in the form of ... lightning! On the other hand, when you get a match, happy dancing people/animals will appear, which is always better than lightning.

Analysis: Light Sprites is a simple hit the target game wrapped in a sugary sweet coating that makes it an absolute joy to play. After logging just a few minutes your brain will become enamored with the short sound bytes characters utter such as "I like rainbows.". Yes, it's that cute. You've been warned.

The most rewarding aspect of Light Sprites is the connection between hitting targets and the scenery. Background objects playfully spring from the bottom of the screen, each with a few targets on its surface. As you hit targets, dancing characters appear in their place. Hit every target on the object and something special will happen such as flowers growing on the ground or a barn appearing at the top of the hill. Forget getting a high score, just hit the targets to see what crazy things pop up on the screen.

Presentation aside, Light Sprites has a smooth and easy-to-learn control method that doesn't require much skill to master. Aiming isn't too sensitive and you really have to pull back on the orbs to give them any power. Most of the time you'll just pick and drop orbs like berries from the cloud. Not much challenge, but Light Sprites is made to be enjoyed, not conquered.

With its sugary sweet music and visuals, Light Sprites is an excellent diversion from your daily grind.

Correct me if I'm wrong, but hasn't this already been reviewed here?

Maybe I'm confusing it with something else.

This happens all the time when we feature a review for a game that was mentioned during one of our Friday Link Dumps. Some may even get a strange deja vu when seeing these games, but in truth they never did receive a proper treatment from us before. So here it is! :D

I love this game a lot -- I suspect way more than most people. I selected it for a challenge this week on Kongregate, but the reception was a bit less than happiness and sunshine.

Hero Interactive's track record has been pretty impressive with its last few games (also Bubble Tanks and Starshine); I'm really looking forward to the next project.

I liked the sound effects the most :P

Thanks for clearing that up, Jay.

I searched for the game and found said Link Dump.
Overall I like the game, but I get bored of it quick.

Yup, Link Dump from May 18th. I thought I'd seen it before.
That music really sticks in your head!
Maybe I'm a bit sick, but I like watching what happens when you get the color wrong (hehe)... which is good for me since my aim is horrible.

lol, people in this game sound like steward from madtv!

I really enjoyed they style of the game, especially all the "deaths" of the people if you used the wrong colours. Those were very interesting. :)

I also think it's worth pointing out that the game does end. Sometimes it's hard to play games like this if you suspect it's bottomless... or in this case, topless.

I just like the fact that it goes through the entire world; Pirates, tribals, people from India, Japan, China, even the Wild West! Cool.

Ha. I love when use the wrong colors on the circles...The different ways the people die are funny. The voice reminds me of one of the Harry Potter Puppet Pals. Ha.

Argh, I remember that challenge. I managed to beat the extra hard bonus challenge, and then had to go lie down to allow the bright colors and sunshine to drain out of my ears.

Just my type not scary!

Oh dear lord that is cheery!