The once beautiful forest has lost its light. Darkness has gathered and soon all will be lost. But one little glowing light has the power to push back the darkness and rekindle the once warm glow the forest had. Light the Dark by Kyu is a free indie platform game where you must light all the beacons and make it to the ending before your light goes out. The woods are filled with obstacles and dark red creators wanting to stop you from saving your world. Using the [arrow] keys to run and jump is your only power to make it through this dark world. If you get hit by an enemy you lose more of your precious light that is always draining away. To help you, spread across the map are glowing squares that will add a few more seconds before you go out. Lighting the diamond beacons by touching it will grant you much more time, but there is never enough to stop and catch your breath. Some levels will require planning to hit all the beacons, but you have to think quick if you want to save your home world. 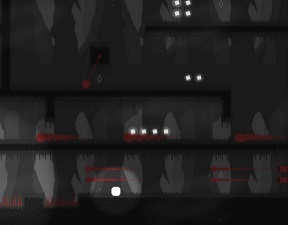 Light The Dark is a very uncomplicated, but yet challenging platformer. It's simple in its ideas as you avoid the red creatures and get to the empty crystals to relight them to open the door. The real trickiness is getting it all down before your power level percentage drops to zero. Since the levels aren't linear and some are rather sneaky where they place the beacons you need to relight, you really have to think through your planned route. Your power level can go over 100% so you can collect the squares at any time and not have to worry about wasting the extra boost they give you. However, you'll still find that on a lot of levels you'll only have a few points remaining until it's the end. It's the rush of this that makes this game really exciting. The atmosphere really adds to the game as well, even if most of the enemy units and your player is just a colored ball, the lighting and background really enhanced the feel... though they could probably have done more with the diminishing light. Yes, your glow lessens, but it doesn't do it to an extent that it's really meaningful. When you reach 10% of your life the screen shakes a bit which really lets you feel the pressure, but it would have been a lot more interesting if they also toyed with the lighting or the lack thereof. Perhaps that would have made the game more frustrating, but as it is Light the Dark is a simple yet beautiful game that will have you feeling the rush as you win with just a few seconds away from death. If you enjoy the game, consider checking out the official Steam Greenlight listing to help it grow!