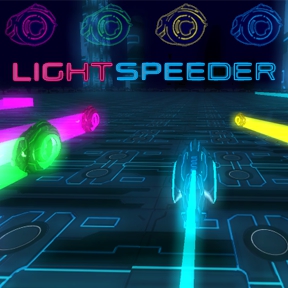 Way back in the early 80s, I had a favorite movie. This film featured a future Oscar-winning actor as a young computer hacker that was literally sucked into a computer world where the video games were real. One of its best scenes presented audiences with an intense competition where futuristic-looking motorcycles left deadly trails of light behind them. This realistic depiction of the classic Blockade/Snake game has inspired numerous videogame versions over the years, from Atari's Surround to 3D offerings like GLTron and Armagetron. This time around, the developers at Ayogo Games take a stab at the light cycle game genre with their new Unity title, LightSpeeder.

LightSpeeder is fairly standard 3D light cycle fare. The object is to survive a race against three brightly-colored opponents, avoiding any walls and causing your opponents to crash before you do. You can play in a single-player Tournament mode with three lives, or Quick Play with one or two players (in split screen) simultaneously. To control your single-wheeled LightSpeeder, use the [left and right] arrow keys to turn at 90 degrees angles. If you travel near a wall, you gain speed. In a departure from most light cycle games, you can press [up] to jump over walls, and can customize your LightSpeeder to jump more quickly or slowly.

What separates LightSpeeder from its predecessors is its slick presentation. The developers really take advantage of the Unity platform, as evidenced by the game's impressive models, backgrounds, special glow and particle effects, and sheer sense of speed. The game's dynamic camera is helpful, automatically tilting to a higher vantage point when you approach walls. Your ears should also enjoy LightSpeeder, which has a great techno soundtrack and nifty sound effects (including amusing screams as your enemies wipe out). All the while, a 2D mini-map in the corner shows you and your opponents' top-down positions in the arena, helping you plan ahead for that next tight turn.

It's worth mentioning that the gameplay in LightSpeeder, while relatively simple, is tough and somewhat limited. The AI puts up quite a challenge in the Tournament mode, sometimes prefering to ram into your LightSpeeder even if it means suicide. Assuming you can survive wave after wave, there only appears to be one environment, and a lack of powerups or bonuses remove some needed variety to each race. In addition, the controls also take some getting used to, with very quick reaction time being key to your success. Still, light cycle purists and classic gaming fans should enjoy LightSpeeder, with its visuals, sense of speed, and sheer competition. Think you're ready to hit the grid for some high-speed competition? Get going, program! [END OF LINE]

Thanks to Max for the tips!

Well, so much for my plans of doing anything else today.

Not BAD...but still inferior to the pinnacle of the genre, Armagetron Advanced. Points for the creative cycle design, and the "jump" ability adds an interesting new dimension. Lag is a killer, but that's true with any game like this. Will definitely take me some time to learn how close I can grind walls, and just how close a close call can be.

In Armagetron Advanced, they built in a mechanic known as "rubber" which, to make it short and sweet, momentarily adds a time buffer when a direct approach is made to a wall. It's not really perceptible (except on some servers where it is raised to ridiculous quantities,making a collision almost impossible), but it defeats low framerates by allowing a few beats for the image to catch up to what the computer is tracking. As far as I can tell, there is no such mechanic at work here? But then, I'm on my WWII-era work compy - I'll have to see how it plays on the macbook later.

The ability to customize controls would be a plus, and the indispensable ability to look left/right (again, as in Armagetron Adv.) is missing.

They really need to add visibility to the exterior walls. How can you possibly avoid crashing into something you can't see? Serious detractor to gameplay. I'm out.

[You might want to adjust the brightness/contrast of your monitor. I can see the exterior walls just fine. -Jay]

Thanks to Max for the tips!

I keep getting an error that says "Content was stopped because a fatal content error was detected."

I like it, not a bad representation. Teh camera did get ahead of my Unicycle once so that I could not see my bike. oh yeah, and what is with the unicycle?

I have one slight issue with this - that happens to make this one virtually unplayable for me: the Hungarian keyboard-mapping swaps the keys Y and Z (don't ask) - so, for me, the key Y is in the middle of the top letter key-row of the keyboard. So, I should use that button, plus the X to turn and space to jump - everything but easy...

Of course it would be more than unfair to expect the developer to think of issues like this, so I'm not blaming them at all, and, of course, I could also set my keyboard to English - but I think it would be a nice move from the developer to let me set the control keys.

@bioLarzen, I consider it generally unfair from developers to use letter controls and make them unconfigureable. Surprisingly often they are US, and surprised not whole world has the same keyboard. Use arrow keys and/or make them configurable.

Generally I play this game better by watching the 2D perspective only. Except for jumps. I know, tron is all about cool animations and the such, but this one example where 3D doesnt actually add to the gameplay itself.

Btw. my Y and Z keys are also exchanged. But I configured dual keyboards to be switchable with alt-shift already, because many online games do exactly that. Normally I just stopped complaining about it :)

@bioLarzen/fuzzyface: Yes, allowing for keyboard reconfiguration is a big priority if people want their games to get played in an international market. For example, "WASD" controls may be fine if your first nine letters are [QWE, ASD, ZXC], but if they're [AZE, QSD, WXC] then that's going to be extremely counterintuitive.

@Menschenjaeger: Yes, Armagetron is pretty much the ultimate lightcycle game :-) Many hours waste on that, once upon a time...