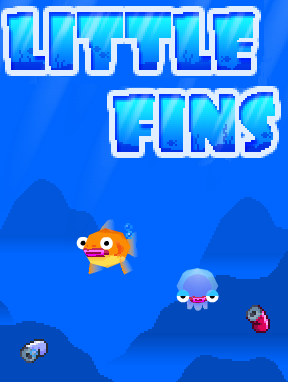 Sometimes, it's not that bad to be a little fish in a big pond. Or at least it isn't when it means Neutronized is the one at the helm of a new action-arcade game. Little Fins stars a goldfish who wants nothing more than to explore the ocean and clean up some of the soda cans laying about. Unfortunately, there's sharks and rays and squid afoot... err... a-fin. So with heaven above and the sea below, you must help a little fishy on the go!

Click and hold the mouse to guide your fishy around the seascape, the farther you point your mouse, the faster it goes. Avoid enemies and spikes and make it to the end-of-level checkered-ring. Currents will push you, and colliding with sponges will bounce you around. Eating smaller fish will make you grow and allow you to plow through rock formations and swim against currents for a short while. If a door blocks your way, swim through each of the rotating gate to open it. Collecting cans grants clean-up points, with a bonus given for collecting all of them in a given level. There are fifteen levels in total: complete them all and you're golden!

Little Fins calls to mind other ocean-based games, specifically Ecco the Dolphin. That is to say that it combines a soothing aquatic aesthetic with a few surprising spikes of difficult platforming... fewer controllers will be broken in half, but it's always fun when games are able to be cute without sacrificing difficulty. Certainly some of the challenge comes from the loose mouse controls, but even those are forgivable since they do a good job of mimicking the struggle of pushing against the ocean current. Throw in the retro sprite-polygon meshed graphics and an emotive soundtrack and you've a nice little game that plays, well, swimmingly.

As soon as I saw Ecco the Dolphin in the review, I had to try this game.
Nostalgia beckons me.

same thing. I saw echo and knew i had to give it a chance..that game was so monumental in my childhood

On level 14, I'm not being able to collect all cans.