There are a lot of casual simulation games out there, and most of them seem to take place on an island somewhere. What if you love the genre, but are getting a little tired of sand and beaches? If so, then it's time to check out Little Folk of Faery. Created by Kylotonn games, Little Folk of Faery is a gorgeous, whimsical, amusing little game that takes place at the base of an ancient tree, which itself is inside an antiques shop. 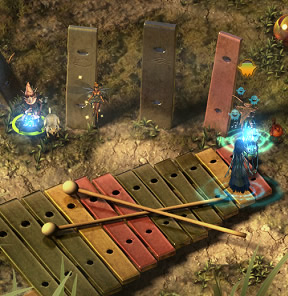 The story begins with the heroine going to the old abandoned curiosity shop that she inherited from her grandparents. The shop itself is dark and dingy, but she soon discovers a giant tree of all things is growing right there inside. A poor faery village exists at the base of the tree and used to be cared for by her grandparents, but since they've been gone everything has fallen into wreck and ruin. The faeries have lost most of their magic, and many have wandered from the village and become lost in the woods. The food is now scarce, the water source has disappeared, and mist encroaches from all sides, mist that contains wistful spirits. Telling their tales of woe, the wistful spirits have depressed the normally cheerful inhabitants of the village into a depressive coma which can only be cured with copious amounts of food and music.

Your job is to rehabilitate the faery realm, as well as help clean up the musty, dusty shop. You can see into the faery realm, and tell the little folk what to do by the simple expedient of picking them up and dropping them on something that looks interesting or useful. Slowly you will begin to uncover the faery elders who are trapped, along with uncovering and repairing the resources needed to return the realm to its normal state. Along the way you must also attempt to lure back the missing inhabitants of the village, in order to have enough manpower to complete the necessary tasks. 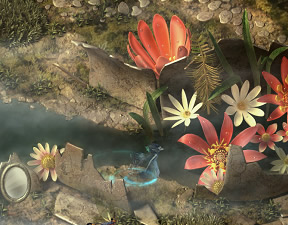 Everything is controlled by the mouse. Pick up villagers and drop them on their appointed tasks with a click of the mouse button. You can navigate around the area in several different ways: click and drag the scenery, pick up a faery and scroll by moving to the edge of the screen, or use the handy overview map to quickly move to an area. You can click on some items to find out if they are important, others will only be identified if you "hover" a villager over them to see what they say. The menu at the bottom of the screen shows tallies of supplies as well as your villager's state of mental health. Details on tasks, collectibles, and the different types of faeries in your village can be found in a tome of faery lore. A handy slider allows the player to control the game speed, from paused to fast forward, with stages in-between. Just remember, like many casual sims, Little Folk of Faery continues to run even when the game is off, so be sure to adjust the speed accordingly if you're going to be away for very long.

The village consists of four different fantastical creatures, pixies, gnomes, dryads, and leprechauns. Each has their own strengths and weaknesses, and talents that can be exploited. Each also comes with their own charming little animal sidekick who accompanies them everywhere. Identify the areas that need to be improved and place the appropriate faery on it, and the game begins. There are places where you can train each of the folk of your village in different tasks, and many places that need uncovering, repair, or just some tender loving care. Just be careful to avoid the wistful spirits, or at least distract them with some music so that your workers can get on with their tasks. Each major accomplishment banishes more of the mist and reduces the number of wistful spirits, until the village is back at full strength and the glory of the faery realm is restored. 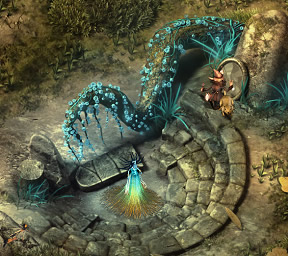 Analysis: Little Folk of Faery manages to pack both a visual punch and a variety of amusing puzzles into one gorgeous package. Whereas most casual sims tend to go for cute and cartoony, Little Folk of Faery has gone for stunning, detailed, and downright breathtaking. Gamers may spend a goodly portion of the beginning of the game just gazing in wonder at the little folk and the background scenery in which they live.

Whimsical touches are in the details. Details like the use of "big people" objects incorporated into every facet of faery life, from chairs made of buttons to a water mill made of an old coffee mill and thimbles. Everywhere you look in this world is wonder piled upon wonder, from the strange faery elders to the haunting wistful spirits, who also have their own little animal sidekicks. The music is lively and unobtrusive, but the great quality is in the incidental sounds, from the lively, incomprehensible chatter of the natives to the mournful cries of the wistful spirits, everything only enhances the experience of a Victorian watercolor brought to stunning life.

A tutorial will get you started and a helpful guide faery will help you along the way. You will also get clues from your faithful dog Ginger, who will bark to bring your attention to things that need looking at. The learning curve is smooth and easy, and the faery tome will also help with an ongoing list of all the tasks that need to be done. As you progress to the more difficult tasks, clues become fewer and fewer, inviting some creative exploration and puzzle solving to finish the game. Not that the game completely finishes, as you can keep your village running long after all the puzzles are solved.

There are a few quirks here and there. For example, the prompt to find the honey spoon stayed up for me long after the spoon has been found, repaired, and filled with honey. And the guide faery made continued attempts to draw my attention to the compass, even after it had been discovered. These are minor annoyances in what is otherwise a lavish, enjoyable escape to a world of pure imagination.

Little Folk of Faery will appeal to a wide range of people, from those who enjoy its fantastical look and feel to those who enjoy the casual sim genre as a whole. Whimsical, melancholic, gleeful, astonishing, and definitely worth a look, Little Folk of Faery is casual gameplay done right, with attention not only to every detail of the look and feel, but the gameplay dynamic as well. Get lost in the beautiful land of the faeries.

Find the King of the Firefllies

Lead the King of the Fireflies Home

Clean the Hand of Titan

Special thanks to Karl for this strategy guide!

Find the King of the Firefllies

Lead the King of the Fireflies Home

Clean the Hand of Titan

Special thanks to Karl for this strategy guide!

hahahah!!! I didn't know JIG or you grinnyp had a walkthrough to this game! I would have bought, it, but, I need the money right now :X

I gotta check this out!

My characters are working and were making progress when I left last night. But today they are still working with 0% progress and even -% on learning progress. What happened?

Actually, I just wanted to leave a quick tip that The Tome of Lore gives a description of each faery that includes their strong and weak skill. The Pixie (or Musician) is actually the one that is NOT good at "Knowledge", and the Dryad is not good at "Exploration". That makes a big difference if you choose to use the walkthrough as a guide.