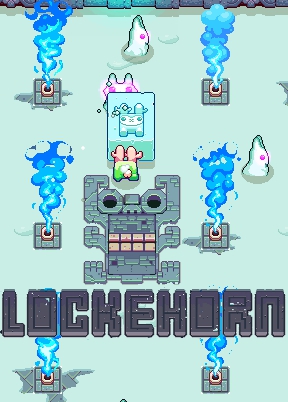 Nitrome gives us the cold shoulder in the chilly little arcade game Lockehorn, where you control the titular character as he races to save his tribe from the big freeze sweeping the land. On each stage, your goal is to rescue your friends trapped in ice by pushing those ice blocks around, trying to crush the snow spirits patrolling the area against the wall so you can unlock a heated pit that will thaw your allies.

Use the [arrow] keys to move around, and move against a block of ice to push it across the ground. The fire to melt the ice and allow you to proceed won't appear until all the enemies are gone, so get rid of them by pushing the ice at them as fast as you can to crush them against walls. It may sound harsh (especially when their wee little eyeballs go bouncing across the ground), but hey; they're the ones who put your pals in the deep freeze to begin with. Just avoid hazards and try not to touch the spirits directly or you'll turn into the cutest little rabbit... deer... snowman... thing you ever did see. Lockehorn is fairly simple, but wrapped up in Nitrome's gorgeous signature visuals that pack tons of little details and animations into it, it's also a fairly charming title. The sliding mechanic can take some patience with enemies in constant motion, especially in areas where you can actually lose the ice, but if you're looking for a little bit of wintry fun you might want to spend some time with our bunny... snowsuit... pronged... hero. Guy.

Everytime Nitrome comes out with a new game, I really hope that they can recapture the awesomeness of some of their classics. This has a neat idea, but the game controls are so fiddly, and I just got... bored! Really quickly. I haven't been able to really get into a Nitrome game for a really long time, and I was hoping this might be different. 3/5 because, as always, it's well polished, cute and has nice music!

Decent game, but too short.

I almost destroyed my laptop because of this game