Please note LongStory is an episodic game. Currently, only episodes one and two are available. The first episode is free, while episode two is an optional in-app purchase.

Bloom Digital's iOS and Android LGBTQ-friendly episodic visual novel LongStory is about high school. Well, people, actually. You've just come back to the States after spending time abroad in France, and adjusting to school is hard enough thanks to the return of your old antagonists, a trio of girls you call Hanniferjane, nevermind the strange notes you just found in your locker. It seems like the locker's previous owner left under unhappy circumstances, and while everyone seems to know something, nobody wants to talk about it. Of course, whether you pursue the mystery or just focus on your life is up to you... it's not like you don't have friends of your own to think about. Like homeschooled Nora, who you only know from long chats online, or taciturn Marcel, who just wants to go home to Dubai. And then there's that person in the weird costume who never seems to talk, and yet always knows just what to do. Your choices will determine the outcome of not only the story, but your various relationships, as they carry over from episode to episode. Choose not only your appearance and preferred pronouns (limited to he, she, and they), but whether to pursue friendship, romance, or simply find out what happened to the girl who came before you in this funny, sweet, and earnest game. 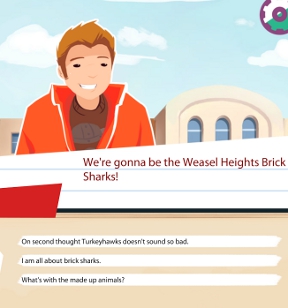 Playing LongStory is pretty simple... just tap the decision you want when give a choice twice to make it, and use the bookmark in the upper-left corner of the screen to mark and return to a point in the game. Each episode is likely only around twenty minutes long, but chances are you'll find a lot of replay value to be had in going back and making different decisions, especially when it comes to who you spend time with... which makes the limited save/load function, something typically a lot less restrictive in the visual novel genre, all the more annoying. While LongStory still feels like it has some kinks to get out, with characters occasionally seeming to act as if you had made decisions you hadn't, for the most part it feels very genuine. Originally intended to be only playable with a female character, LongStory has since opened up in a big way with the inclusion of more genders and even gender-neutral avatars as the developers have shown a keen interest in listening to feedback. The writing is snappy, by turns funny, warm, and serious when it needs to be, and the cast all feels refreshingly fleshed out... though some initially feel like tropes or stereotypes, they gain more depth the more time you spend with them, and even the school bully isn't as pointlessly nasty as she(they) seems. Characters feel genuine, even down to the way they talk in a way that almost all of us will recognise in some form or another... I can look back at my years in school and point to more than a few Noras, Colins, and even Abbys, to the point where I could give you specific names for each. As a result, there's a realness to the setting and characters, even when dealing with goofier aspects like your good-vibes-obsessed principal, that's extremely appealing.

The first episode mostly deals with settling into school, meeting characters and establishing the bare bones of the mystery plotline, while the second episode gives you a chance to get more than a little flirty with whoever you might have your eye on and deals more directly with a conflict involving Hanniferjane. None of it is what you'd call "difficult", since winning is less about achieving a specific condition as it is uncovering whatever story you're focused on. Don't expect to get much of a resolution to the main story or, well, anything at the moment, since as of this writing, episode two ends on a big cliffhanger and episode three is likely a good ways down the road. It's a mystery story, sure, but it's also a character story, and LongStory succeeds by dealing with its subject matter with good grace and an open frankness that's softened by clear empathy in the writing. You don't need to be gay to find meaning and relevance in the parts of the story that deal with queer identity, and indeed, the five romance options allow you to flutter your eyelashes at whomever you choose. There's still a lot about the story, about all the connected stories, really, that feels rushed due to how short each episode is, like everyone is competing for attention (both from the player and the developers) and gets slightly undercut as a result. Still, LongStory is such a well-meaning, genuinely likable charmer that it's easy to recommend checking out at the very least, and definitely one to keep your eye on.

Here we go again... and honestly, I'm not even sure why I'm commenting, but "LBGTQ-friendly"?

As if all other games are LBGTQ-unfriendly? So every game that doesn't have a racial minority as the main character is racist now? Or race-unfriendly?

Look, I have no issues with gender issues, games with gender issues, etc. I do take issue with SJW's implying that the gaming world is out to malign or implicitly harm the LGBTQ community. Maybe I'm reading too much into "-friendly", but come on, can't a game just be a game? No one had to label the ME trilogy or any of the Dragon Age games "-friendly", and it made little difference to me as far as gameplay or story content being "-friendly".

In fact, labeling a game as "-friendly" makes me less likely to play it for fear of it being a poorly made game with heavy handed, poorly written plot points, as is usually the case when you put the message before the game.

You are, indeed, reading too much in to "-friendly". Also, in case you're unaware, "SJW" is a term frequently used as a pejorative and a term of discriminatory derision. I do sincerely hope that was unintentional on your part.

Lots of people *did* note that the ME and Dragon Age series are LBGT-friendly. You are right in that no one is required to note it. What the phrase ultimately boils down to is a bit of shorthand for "this allows for the player to make choices in a (sometimes) realistic way, without being bigoted".

All of that said, there is a philosophical argument one could make regarding the term "-friendly" and the implications you mentioned, but this isn't really a conscious point of the use of the term. For example, there are similar philosophical arguments about how terms such as "colored" or "people of color" imply that the default state of human is "white"/"uncolored". I doubt, however, that this comment section is the best place to deconstruct the impact linguistic construction has on socialization or how it might reflect societal biases.

When a game makes a decision to be more inclusive, I think that's worth celebrating, and worth alerting the people who crave more ways to potentially play as themselves. You are more than entitled to your own decision as to whether you play a game for whatever reasons you settle on, and I would hope you would do other players who come from different lifestyles and social circles the same courtesy and respect of having access to information that allows them to do the same thing. :)

So in response to this post we have two insensitive and offensive comments and two (very measured) responses, meaning that the entire discussion comes down to bigotry or the lack thereof.

How about talking about the game itself?

Personally, I felt the game had quite some promise, but I thought the free episode was too short to give me a good enough feel for the game to justify purchasing the second episode.

I will remind players to please keep discussion civil and thoughtful. Anyone who cannot and who chooses to indulge in profanity and attacks will have their comments removed per our site policies, which are linked in big bold letters above the comment submission box. Repeat offenders will be banned. Thank you for your understanding.

Ok, I typed up a long response to explain my position and rehash an old topic that was argued to death in another post - but I deleted it when I realized that I had hijacked this review once and continued to do so by writing said response.

In the future I will keep my postings limited to the topic of the game and its merits or lack thereof.