In a powerful flash and beam of light, Greg's girlfriend disappears right before his eyes. The time: in the vaguely near future, when technology has transformed the landscape but transporters and starships are still stuff of fiction. There is no plausible explanation for Chloe's disappearance and, worse still for Greg, no one he talks to believes she ever existed. All traces of her have been erased from Greg's world, but not his memory, leaving him with no choice but to try to prove either her existence lest he be proven insane. Likewise begins your involvement and immersion in Lost Echo, a lushly designed sci-fi mystery adventure game from KickBack Studios. 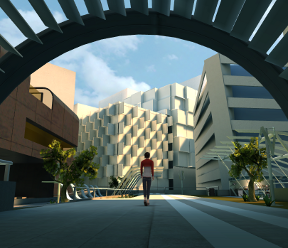 Employing the point-and-click adventure interface, most your interactions in game will involve a simple tap. Tap to move around the 3D environment, to pick up an object, or initiate a dialogue with the people you encounter. A drop down inventory allows you to use, examine or combine items as needed to help you move forward in the story. Once in a while, you'll also have to solve mini-games to open a new area or acquire required tools.

True to the tradition of PC adventure games, there is a heavy emphasis on story and it's in the narrative that most the adventure unfolds. Through your conversations with the other characters, both clues and further details of the mystery are revealed. Yet, although you're given a number of responses during dialogue, your path is steered rather narrowly along a single plot line. Regardless, there are a number of turning points and plot twists along the way; just as you think the story might be winding down, it spins on its heels and runs off, taking you with it. On average, the game will take around five hours to complete if you take your time exploring and work your way through all the puzzles in "normal" mode. Those who want a more relaxed experience can choose "casual" mode which provides more helpful prompts and simplified puzzles. 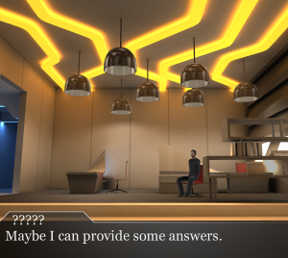 Analysis: The gorgeous environments monopolize center stage in Lost Echo—KickBack's design team did an amazing job making settings I actually dream of living in. Making clever use of architectural perspective and the play of light, each location has a depth of field so inviting to the senses it feels hyper-real. This was enough to hold me absorbed throughout the game play; being tourist in this fictional world, even with its dystopic edges, made the entire experience thoroughly enjoyable. Contrasted against the superior game environments, though, character sprites are usually stiff and strange looking; attempts at physical expression are reduced to robotic gesticulations. This wasn't enough to distract from the wonderfully surreal feeling of walking through a covered archway into a futuristic courtyard or up a grassy hill under a wide blue sky.

That wonder carried me through some clunky plot turns and awkwardly cliché dialogues. Let the eyes be mesmerized and other flaws are more easily forgiven. That isn't to discount the opinions of classic adventure fans who will likely find greater disappointment in this flaw. Being that Lost Echo is a story-driven adventure, it's hard to not cast a critical eye on imperfections in the writing. Yes, at times the pace is slow, conversations don't flow naturally, and certain plot details are left deliberately vague. Still, the end result remains unchanged: this is an engaging adventure that satisfies far more than it leaves wanting. Thus, Lost Echo is best enjoyed for what it is: a gorgeous, mystery-themed vacation in an alternate world.

NOTE: This game was played and reviewed on the iPad 2. Game was available in the North American market at the time of publication, but may not be available in other territories. Please see individual app market pages for purchasing info.

Good review of an odd game. I don't quite see myself finishing this one, after just too many side quests and awkwardly written conversations between awkwardly rendered (in both the graphical and storytelling senses) characters. Still, I'd love to see some purely first-person, puzzle-oriented point-and-click games set in this kind of gorgeously realized environment ("dystopic edges" and all). Definitely a developer I'm planning to keep an eye on...and in the meantime, Prominence maybe?

Thank you, I'm glad you enjoyed the review! This is a game that works well when you're hungry for a sci fi mystery point-and-click adventure game. I can eat up whole adventure games and still come away wanting dessert, so Lost Echo was well worth chewing on, even with its strangely crunchy bits. I hope you finish it: it'd be fun to compare notes about the twists and ending (I didn't want to spoil it in the review even if it isn't too hard to spot from a distance).