You remember how, at the start of the sci-fi horror shooter Outpost:Haven, you and your fellow manly space marine decided to split up upon docking at the extremely dangerous and dead-in-the-water alien-riddled space station? What do you think that other guy was doing the whole time? I always figured he'd holed up in the captain's quarters, drinking replicated Earl Grey tea (hot) and playing the flute while you did all the hard work, but apparently not. In the sequel from Squize, Lost Outpost, you'll find out Jameson (that's you!) was doing his share of the legwork. And the gunwork. And the oh no what was that sound noooooowork. You'll even get to continue Lee's story following his crash landing on the nearby planet after escaping from Haven. Gosh I sure hope this place also isn't infested with angry things that want to wear my face as a party hat! 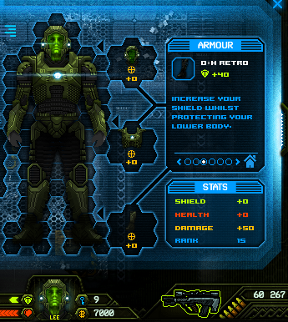 Lost Outpost offers a few different control choices, though the default is your basic [WASD] for movement, while you aim and shoot with the mouse. [R] reloads your weapon, and you can hold [Q] to open a sub-menu to allow you to swap between any of the other boomsticks you have available. As you kill enemies, you'll gain experience and rank up, which unlocks new things to purchase from the shop terminals with the cash you find laying everywhere. (Why is it the first thing these aliens did was to make it rain?) From these terminals, you can also upgrade the weapons you own, or buy basic ammo and other supplies. Both Lee and Jameson share upgrades and weapons, so whatever you buy for one, the other gets as well. On each level, you've got three lives, and when those run out, you'll be forced to restart the current stage, because everyone loves a lives system these days. So, assuming you don't want to die, you'll want to move fast when dealing with enemies, using the environment against them to obstruct their path, and nabbing any ammo or health pickups you find. If you're having difficulty, consider playing some of the optional side-missions for extra experience.

If you've played the original, then a lot of Lost Outpost is going to feel very familiar to you. Most of the mechanical changes are relatively minor, at least as relates to significantly altering the experience, which is both a good and a bad thing, if only because it keeps the core gameplay we enjoyed intact but also feels a little samey throughout as a result. The unlockable armor is a nice addition, if not one that particularly stands out. The game actually feels more cinematic this time around, with flashier scenes and sequences, and getting to play as Lee planet-side provides an interesting variation... at least until it boots you into another location that looks nearly identical to Haven itself. It does feel like the surface stages rely a bit too much on endlessly spawning enemies, which gets both tedious and frustrating as it breaks the otherwise tense atmosphere the rest of the game is so great at crafting. As long as I'm complaining, I'll also say that it would have been nice if the map would mark off completed portions of multi-part objectives instead of leaving them all active so you can lose track of which ones you've completed.

Regardless, it's clear a lot of work has gone into this quasi-sequel, and if you don't mind the feeling of deja vu, Lost Outpost is another freaky, alien-ridden adventure you'll likely enjoy. Some of the jump-scares, which tend to be of the "WHAT WAS THAT NOISEoh, it was just a cat/ta chair/Michael Bubl�" variety, are wonderfully effective, and though the visual design overall potentially tends towards almost a little too dark, the detail is great. Lost Outpost is a solid level-based shooter with a distinct style and atmosphere that's well worth checking out.

Thanks for the great review Dora, we always get honest thoughtful views here which is why we always rush over here when we here a review is up.

In your review of Haven I remember that you weren't scared by it, so we went out of our way this time to increase the jump scares and try and make it more filmic ( Which I'm so glad you picked up on ).

I've rated down because of disaster controls. I loved this game last time, but besides the improvements, controls make it hard to play. Many times my mouse is on the right and i'm still shooting to the left, or i get stuck on objects, enemies etc. The reason might be the performance of my computer, but i have a quite good machine, and i haven't checked in extra grafhics in the game options menu..

Well, that was a nice review! I remember being sad when i was left alone in the first game and thinking it was a terrible, terrible idea.
I really liked the game when i played for real. Some people complain about the movement, but hey, you are wearing an armor! the movement is fine!
And there is the intriguing end scene. Great Game!
[SPOILER]
never consider a fictional character dead unless you shoot the brains yourself!