In Lucky Rabbit Reflex!, a vibrant visual novel life simulation from Roxanne Chen of Studio Super63, you control a plucky young heroine who has transferred to a new school in her final year. It's a chance to reinvent yourself, but it's also a chance to potentially find romance... if you can get close enough to any of the guys in your new social circle, that is. Packed with humour, charm, and some genuine heart, Lucky Rabbit Reflex! is a warm, engaging, and blissfully drama-free experience that's easy to get into a very hard to put down. 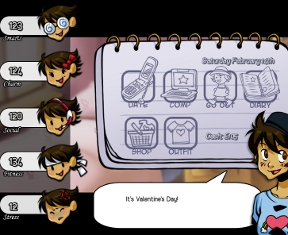 There are five (... or more... ) potential fellows for you to cozy up to, and each of them is looking for something very different in a girlfriend. However, the path to success in your love life and your new school depends on a lot of things, from doing well at studies to balancing friends, school clubs, and a part time job with the other important aspects of your life. Each day, you can select an activity that will potentially lead to an increase in one of your skills... as well as a bit of stress. Don't worry, you can always relax if you need to cool off for a bit. On the weekends, don't forget to refer to your diary to check out any job opportunities if you want to increase your cash flow, but you'll need to be qualified for it first. Don't neglect work or the school clubs... you never know who you might meet, or what it might lead to if you dedicate yourself to it with a little elbow grease.

On Saturdays, you can take some time to yourself to shop or unwind, as well as check up on fashion and e-mails, but you'll also be able to call up the people you know to hang out. In addition to maybe getting to know one of the potential bachelors a bit better, this is also your chance to build and strengthen friendships with the other girls you'll meet in school. Since you can save or load by right-clicking to open the menu, don't be afraid to retry certain scenes if you don't get a favorable response to your choice... it's not cheating, it's... looking out for number one! 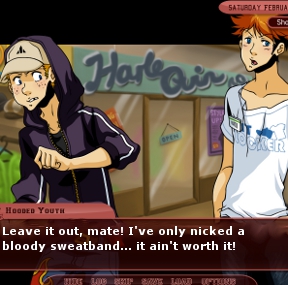 Analysis: Lucky Rabbit Reflex! is one of those rare games it's impossible to be in a bad mood while playing. From its polished presentation and expressive characters to its bouncy soundtrack, it's effortlessly enjoyable and addictive. What sets Lucky Rabbit Reflex! apart from so many other visual novels, however, is how instantly likable and genuine its cast seems. Roxanne's writing is enviably natural, creating believable dialogue that makes everyone you'll encounter feel like people rather than characters, and you'll want to get to know them as a result. This even extends to the heroine herself, which is a welcome touch. It's just a shame that there's no option for girl-girl romance for players who might not want only heterosexual choices, which will, for some people, definitely limit its appeal. Similarly, you might want to avoid this one if mild casual profanity or the use of words like "retard" in a negative sense offend you.

Speaking of romance, however, Lucky Rabbit Reflex! earns some high marks for actually making something that feels like a relationship rather than a one-sided chase sequence. In most cases, telling the guys what you think they want to hear is a bad idea, and they all respond much more favorably to honesty and are a lot more entertaining as a result. On the downside, it often doesn't feel like there are enough different events for the guys or the gals. Certain scenes will repeat word for word if you decide to hang out with people, which is a bit of a disappointment considering how often it happens. During one playthrough, I was given the option to walk Merle to the bus stop three days in a row, and each time resulted in exactly the same exchange. I also did personally feel that at least one of the relationships was a little creepy, largely due to how it was presented, but that may come down to a matter of personal taste. 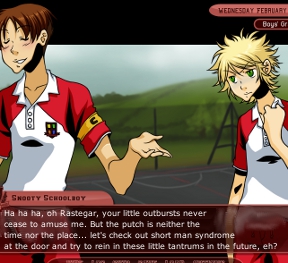 The problem with a lot of life simulations is that balancing statistics and stress usually winds up being more frustrating than fun, but somehow Lucky Rabbit Reflex! manages to neatly sidestep that by being both streamlined and forgiving. It's remarkably easy to balance your heroine's stats out, and this lets you relax and enjoy the game without stressing over, well, stress. Handy, since getting the best endings for most of the guys generally requires performing exceptionally well in particular areas. In general, however, you'll find that it's usually pretty obvious how to keep meeting up with people and triggering new scenes, so you likely won't find yourself floundering around waiting for something to happen like other titles.

Lucky Rabbit Reflex! isn't as deep or complex as other titles, but it's accessibility and snappy writing stands a good chance of winning over everyone from casual fans to diehard otome-fanatics. It's decidedly light on drama, and is the perfect choice for putting a smile on your face... especially if you're looking for something with a lot of replay value. Though even the "best" endings for each guy feel a little abrupt, Lucky Rabbit Reflex! still offers a ton of content and charm for multiple playthroughs that means it's well worth making a date with.