Karuna and Aurelie used to be close, both training together to become great swordswomen, though Karuna always hoped they could become something more. All that changed the day Aurelie went missing... and though Karuna never gave up hope looking for her, she never expected them to cross paths again two years later, or the person Aurelie could possibly have become. In free indie RPG Luxaren Allure by developer Unity, formerly kind and quiet Aurelie is now Overlord Darkloft after donning a suit of cursed armor found in a castle where demonic statuary and glistening red furniture are used to decorate, as one does. Karuna's been tapped by the king to play the role of the "chosen one" and gather the artifacts needed to destroy the Overlord... no matter how she may still feel about her former friend. 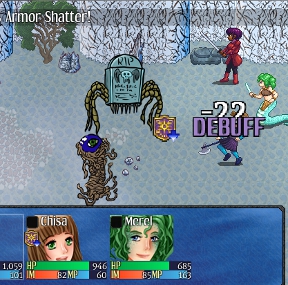 To play, use the [arrow] keys to move, the [spacebar] to interact, and [ESC] to open the menu, where you can save at any time in addition to accessing your inventory and other things. No need to rifle through every drawer and pot looking for items... containers that aren't treasure chests but still have something for you are marked considerately with a golden sparkle. The game does feature ye olde turn-based(e) combat, but you can change the difficulty whenever you want at the menu, ranging from hard to very easy. Battles themselves aren't random... you'll see monsters as masses of darkness on the map before you encounter them. During battle, monsters get stronger and gain more abilities the longer the fight goes on, so it's best to try and take them down as fast as possible. Whenever a party member takes damage, they gain Impulse, which can be used to execute powerful abilities. As you might expect, defeating foes not only helps your characters level up and get stronger, it also gives you sweet, sweet treasure... some of which can even be used to craft powerful items! 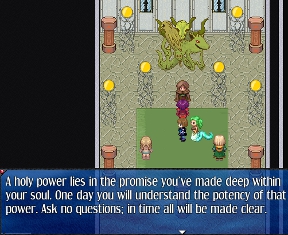 Though the game starts out fairly simply, Luxaren Allure's dungeons and challenges grow more complex as you progress. It's a welcome scale in difficulty that keeps you working without ever really feeling like you should grind for levels, especially since you can adjust the difficulty on the fly outside of battle if you're stuck. It does have a tendency to make maps that are almost overly sprawling, and the lack of visual interest in some of them can make navigating tedious, but on the whole, they show a lot of creativity and a desire to elevate the dungeon aspects above simple hack-and-slash. In fact, that creativity shines throughout the whole presentation. Virtually everything is custom-made, instead of using premade resources like many RPG Maker games do, and the personality pops as a result. 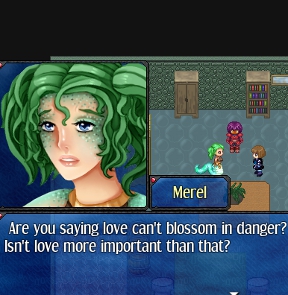 Karuna's deep and abiding love for Aurelie is something you just sort of have to take the game's word for, since you don't really see or feel it before Aurelie is shunted off to be the villain, as opposed to Chisa's feelings for Karuna. In Lunar: The Silver Star, for example, at the beginning of the game when the hero leaves his small village, he parts from the heroine and love interest. In the remake, that was changed to have her accompany him for a while specifically to allow players to get to know her character and their relationship, and I wish Aurelie had been given similar screen time. On the flipside, watching Chisa struggle to understand Merel's sudden infatuation with her is pretty darned cute. Luxaren Allure is actually pretty great at knowing how and when to lighten the mood, and it's frequently pretty funny, too. These more lighthearted moments help to balance out the relative seriousness of Karuna's quest, and Karuna herself, as she struggles with knowing she needs to be a hero by striking down the very woman she's secretly loved for so long. Whether Aurelie can be saved is, of course, the big question.

Luxaren Allure is one of those games you're still surprised and skeptical to see is free, because it feels like it shouldn't be. It's an earnest adventure that pokes gentle fun at the genre's tropes without losing sight of the main plot, and is filled with some pretty wonderful weirdness to offset the seriousness. (Battle with a literal Disco Inferno anyone?) If you've been craving a sweet and fun RPG with likable characters, puzzles, an epic quest, and more, make a date with Luxaren Allure.