Remember that old Hanna-Barbera show Wacky Races? Dick Dastardly? Muttley? Penelope Pitstop? Well, check out Madmen Racing by Flashrush Games and you'll get the general idea. This silly racing game offers fifteen unique modes of conveyance, from a rabbit driving a carrot to a lady reclining in a wheeled bathtub to a pharaoh in a gilded chariot. Each "car" has its own stats for top speed, acceleration, and stunting ability, and all can be upgraded in the garage. Upgrades even carry over between vehicles, so all that cash you poured into your hot dog car won't be wasted when you upgrade to the UFO. 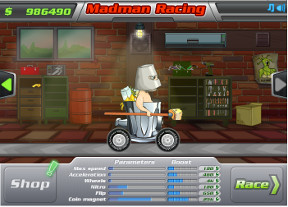 Madmen Racing offers eighteen tracks to unlock, each as varied as the vehicles. Use the [arrow] keys to accelerate, brake and turn in midair as you cruise through an underwater air tube or vault off the pyramids of Egypt. [X] activates your nitro, shooting a burst of flames from your car's tailpipe. This is not a game for seekers of realism. Each level also comes packaged with a couple extra challenges, from snowman decapitation to time trials, and a wealth of scenery to destroy as you vie for the lead. There are ramps too, creating tons of opportunities to perform aerial flips that earn you cash and refill your speed-boosting nitro. It's these moments of split-second decision making that lend Madmen Racing it's best thrills. Do you go for the triple-somersault and risk losing the lead? Or do you play it safe and land wheels down and risk your nitro tank running dry in the last leg of the race? Tough questions for someone piloting a rocket-powered Trojan horse.

Madmen Racing is wacky fun, but its challenge relies more on reflexes and less on strategy. You can't interact with the other racers. There's no turtle shells to throw or traps to trigger, so most races feel like your only real competition is the clock and your own ability to backflip. Shrewd investments in the garage pay off wonderfully later in the game, but it can take a few levels to feel the change in how your car actually handles. Having said all that, some of the later races can feel downright manic. Glorious chaos erupts from each crushed fruit stand or shattered skeleton, rewarding you with coins and nitro in abundance. Wacky doesn't begin to describe it.

Pushing "B" activates an autopilot.

Needs a "self-righting" feature as it's next to impossible to right yourself once you are on the back wheel.

And you WILL lose a LOT of races that way.

PS, once you win the final race in zone 3 NOTHING HAPPENS.
Games with no "Well done, you won!" ROYALLY SMOKE DONKEY.

I won the final race on my 2nd try by 5 seconds with the fully maxed UFO.

2,368 Views
1 Comment
chrpa— Jayisgames needs your help to continue providing quality content. Click for details Welcome to Mobile Monday! This Monday we've got three standard escapes - from a traditional Japanese hotel by shou harata, from another one with a yard under...  ...

1,711 Views
0 Comments
chrpa— Jayisgames needs your help to continue providing quality content. Click for details Welcome to the Roundup 40 with three games! As mentioned in the previous roundups, only odd-numbered episodes are featured since even-numbered are for Robin Vencel's patrons. More...  ...

3,807 Views
0 Comments
chrpa— Jayisgames needs your help to continue providing quality content. Click for details Welcome to Weekday Puzzle! Magnific Studios' cute puzzler has simple rules and is not demanding at all. If you were wondering what are all the similar games...  ...

1,419 Views
4 Comments
chrpa— Jayisgames needs your help to continue providing quality content. Click for details Hi, the newest Weekday Escape is here! Selfdefiant is back with two more short and colorful escapes, and then you end up in isotronic's room. It doesn't...  ...