Clearly, sticking diligently to your academic studies is just going to end up making a lot more work for you, as aspirant wizard Catherine discovers in Magic Encyclopedia: Illusions, the third game in the hidden object/adventure series. While studiously hitting the books at the academy library, she escapes the wrath of a mysterious wizard who uses a magic book to cover the world in illusions and trap her teachers. Can Catherine stop him before he raises an army and destroys the academy? 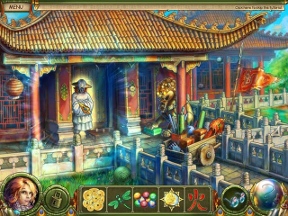 Traveling across several exotic locations, Catherine has to solve riddles and overcome obstacles in order to change the fate of her beloved academy. At first she just needs to get out of the very place she has to save, but soon she is traveling to other parts of the world — to clay armies in China, the lairs of gods in Egypt and the legendary underwater city of Atlantis — following the trail of the mysterious Illusionist.

Magic Encyclopedia: Illusions plays like a traditional hidden object game. The chapters has five different areas, represented in a screen each. Within these areas Catherine has to track down the pieces of various objects — once assembled she can use them to solve certain problems in the scene. For example, a ladder might let her reach a high spot and a lantern can help illuminate the inside of a giant fish's skeleton. At some points mini-games come into play, usually at the end of an important section. With your help, Catherine unlocks doors, stops armies, saves her beloved academy and even has time to fix the odd sibling rivalry between gods.

Analysis: The Magic Encyclopedia series brings some method to the hidden object madness. Instead of finding seemingly random items that are completely out of place, wayward objects are actually useful and play a certain role in helping you progress (once you find all their parts). It might be as simple as a shovel to move dirt or as strange as a coconut for a cheeky Sphinx (don't ask), but they all make sense. On the other hand, if your sole joy in a hidden object game is to track down highly irrelevant items, this might not be for you. Me? I loved it, knowing that all I need is one more piece of an object and then I can do something in the scene that will put me one step closer to opening up the next location. Sometimes these puzzles cross between two locations and you have to do one thing in a new area before you can complete a puzzle in a previous one. 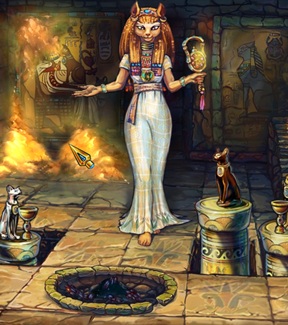 These are hallmarks of the series already, so Catherine's adventure comes with a twist. As mentioned, the villain covered the world in illusions, so things are not what they appear. Initially some of the puzzles are to help Catherine see through this veil and uncover objects. But after the first chapter she gets a pair of magic glasses that lets her explore the real side of things on a whim. It ensures the illusions thing does not become a tiresome gimmick, but this trick also makes the whole idea a bit redundant. In the first part of the game there is a nifty puzzle where you can change a certain spell to affect objects in the room, but you can only do this by swapping between illusions and reality. Sadly the glasses make sure such a level of intuitiveness is never used again. They also make it much easier to find object and if you do get stuck, there is a hint function with no penalty tied to it, the only limitation being that it has to charge up after use.

The game doesn't suffer because of these design choices, but it sure does water things down. Then again, Illusions seems geared towards younger players, and the ease of it all is understandable. But slightly more, shall we say, salted individuals will get through Catherine's quest in a matter of a few hours. There is also little back-and-forth movement between scenes and apart from a few exceptions the challenges are almost all location-exclusive. Mini-games feature frequently, but nothing you haven't seen before. Then again, familiar mini-games are not a bad thing - and the ones in Illusions are certainly well constructed and executed. Perhaps another clue to its audience preference, the mini-games can all be skipped without a penalty to the player. I sure could have used that in Dire Grove...

The visuals are charming, colourful and it's a real incentive to open new locations. A lot of work also went into how scenes transition between the real and illusionary worlds, plus a nod has to be given to the character design of Catherine. The soundtrack is perfect for a hidden object game: soothing, quietly changing and hardly invasive.

Magic Encyclopedia: Illusions is definitely meant for young players. Even adult newcomers to this genre will not find it very hard to play, though it is a very safe and charming game if you are hoping to get someone into the genre. Despite its lack of calories it is immensely appetizing, at least for a late-afternoon snack. If you were hoping to go whole-HOG here, it might fall a bit short of your expectations.