I've always been a sucker for a good update to a classic game, and Asteroids has probably been "updated" more than anything out there. Martians vs. Robots from Tommy Twisters is an attempt to take the classic gameplay of Asteroids and bring it into the new century, using 3D graphics, expanded gameplay, and multiplayer options. 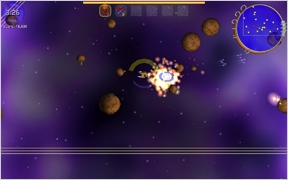 The inhabitants of Earth once developed a race of robots who eventually rose against humanity and, well, kinda conquered us (Terminator, anyone?). Seeing what has happened on Earth, the Martians realize that the robots will come after them next. Using their own advanced technology, the Martians come out of hiding to take on the robots.

Playing timed rounds in the single player arcade mode, your main goal is to clear all asteroids and enemies as quickly as possible. Destroying asteroids often yields deposits of ore, which both the Martians and robots use to build weapons and ships. Using the ore you can switch to the research screen and begin to develop more powerful weapons and new vessels. Do this often during the early parts of the game, as when the difficulty ramps up, you'll want every advantage you can muster.

Martians vs. Robots also features an online multiplayer mode (with up to 24 players!) accessible via LAN or over the internet. Multiplayer matches consist of four different games: standard deathmatch, where it's every Martian and robot for themselves, team deathmatch, which pits the Martians against the robots, gauntlet ,where you main goal is not frags, but collecting the most resources, and capture the core, Martians vs. Robots' own implementation of the classic "Capture the Flag" game. The same ore gathering and research holds true in the multiplayer games, but during team-based play, your entire team gets to research the technology, which allows you access to new weapons and ships faster than if you were researching alone. Multiplayer matches also include a number of additional hazards, such as enemy gun turrets with you in their sites, and gravity wells that will attempt to pull you to your death. You can also use the built-in scripting to design your own multiplayer levels. 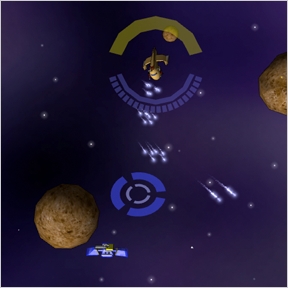 Analysis: The timed levels in single-player mode keep Martians vs. Robots moving at a nice pace while still allowing you the chance to collect ore and research weapons. The weapons for each race are different but well-balanced. Robots can teleport, Martians can cloak their ships. Robots have homing missile, Martians have guided torpedos. It makes for nice variety.

Personally, I really enjoyed playing the single player game. The difficulty could have increased a little bit earlier, and I can see some players losing interest as they face yet another round of clearing asteroids that don't shoot back, but once you get into the later levels, the action against the robot enemies can get pretty intense.

I was never able to find a multiplayer match available to play, the servers are a bit sparse at the moment. The official forum hasn't been updated since August 2008 when the last version of the game was released. I did, however, set up a LAN game and play against a few friends on my own network. From my experience there, multiplayer was great, but I would love to see a match where 24 players duke it out all at once!

The instructions and control configuration screen all talk about a "true physics" mode, what I would consider to be a Newtonian flying model, the default model for the original Asteroids game. The default flight model for Martians vs. Robots includes acceleration, deceleration, and turning while accelerating. There is no option for rotation while your velocity takes you in a different direction, which makes movements like strafing impossible. If one could access a Newtonian flight model, then you would have access to many more advanced maneuvers.

Even if you can't experience multiplayer combat, Martians vs. Robots is still a, ahem, blast to play. If you like a good Asteroids game with a score of extras, then you should definitely give this one a try.

I love this game. It's not the most original - not by a long shot - but it sure is entertaining.

Plants vs. Zombies? Martians vs. Robots? What's next, Ninjas vs. Pirates?

My husband loves this game. It's a fun way to spend an afternoon when you should be organizing your receipts.

This trend reminds me of the Zombie Smashers games that had bunches of stereotypical enemies for you to bash through.

Like in Zombie Smashers X 3, where you fly cars in space and have ninjas, pirates, zombies and pterodactyls vying in competition.

but what about alien robots?