From D3Publisher who brought us Puzzle Quest comes yet another match-3 turn-based RPG hybrid in the form of Marvel Puzzle Quest: Dark Reign for iOS and Android. Following the events of an ISO-8 Outbreak, which lead to mysterious crystals that can increase someone's power appearing all over the world after an incident with a meteoroid, Iron Man and Nick Fury suddenly stumble across a dangerous new trade from a new organization at the same time as the Baxter Building comes under attack by Doctor Doom. If all of that sounded like a bunch of random words and names to you, don't worry. You don't need to know a lot about Marvel to enjoy the game, or even to have played the original Puzzle Quest games before. Because despite some bumps and a few frustrating "freemium" choices, Dark Reign is still funny, challenging, and better than you'd expect. 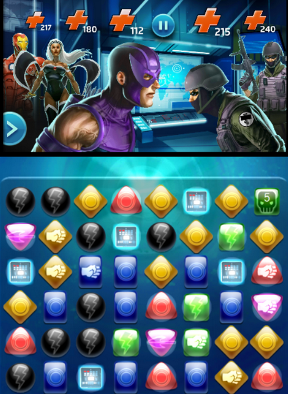 During battle, you and your opponents take turns swapping coloured tiles into rows of three or more. The icon on any particular tile represents the character that will attack when it's matched, and chaining multiple matches allows you to have more than one party member attack in a single round. As you match colours, you build Ability Points for that hero, and when a tile starts flashing, you can tap it to unleash a special attack... Storm's lighting destroys eight random tiles and deals damage, for instance, while Hawkeye can destroy a single tile of your choosing and turn it into a critical hit token. The last party member to attack is the one in front, however, and since they're the ones who take damage from enemy attacks, you want to keep an eye on who's in front. Since battles are usually composed of more than one enemy, each with their own hit points, you definitely don't want to be cornered with one hero standing. Your party retains any damage they took after battle, but you can either spend one of your healing tokens (which regenerate every hour or so) to heal them immediately, or just wait a certain length of time, depending on how badly they were hurt, or just suck it up and walk it off because there's no crying in S.H.I.E.L.D.

Initially, Iron Man is all you've got, though as you play you're given the opportunity to earn both more heroes and additional abilities for the ones you have as rewards for winning battles. (Even against other players!) Of course, as this game is also "free to play", there are two difference currencies to contend with, both of which can either be purchased with real money if you're Tony Stark and you don't care anymore, or by potentially winning them from battle. Both cash and ISO-8 can be used to buy new heroes, or train the ones you've got. However, this is completely optional, and you can earn both new characters, upgrades, and currencies over the course of regular play. Waiting around still stinks, however, and it can often feel like compared to your party, enemy attacks tend to be significantly stronger in a way that seems designed to push you towards paying for healing or stronger heroes and breaks the flow of the game regardless. There is literally no reason this had to be a freemium game... except for money, of course. 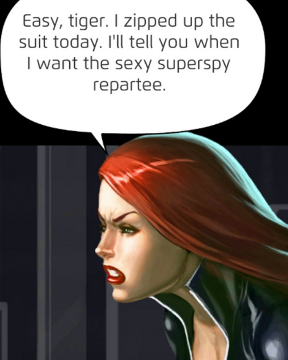 Aside from the freemium annoyances, Dark Reign's biggest problem might be that it's slow to impress. It feels relatively shallow at first, with a few bland battles designed to show you the ropes, and handles its tutorial more than a little awkwardly. Give it a few more battles, however, and Dark Reign slowly begins to show it has more depth than you'd expect. Different enemies work in tandem to manipulate the board, for instance, with one character placing explosives and the other placing a detonator, and many party member powers work best when you structure your group in a way that takes advantage of them. Despite taking place entirely with static talking heads, the writing is frequently very funny, and the story itself is interesting. The characters all have distinct personalities and "sound" like they sound, leading to a game that really looks and feels like it was created by people who know and love the material rather than just churning things out.

Marvel Quest: Dark Reign isn't perfect. The shadow of "freemium" content feels like it's hanging over you, it lacks a lot of the fun adventuring/equipment aspects that made other Puzzle Quest titles feel more robust, and it feels like there's some balancing issues (and bugs) to address both when it comes to combat and paying for things. But at the end of the day, if I ask myself if I still want to keep playing it, if the charm and strategy are enough... the answer, at least right now, is yes. You can play Dark Reign and enjoy it without spending a dime, and though it may be missing some of the things Puzzle Quest fans were hoping for, but beneath the free-to-play aspects still beats the heart of a surprisingly enjoyable, strategic, and funny game, and with more updates planned it could get even better... as long as Norman Osborn keeps his hands and his bad haircut off my wallet.

Just wanted to say that since this review the game has received numerous bug fixes and content updates. I've been playing it ever since I saw your original review and while I have very much enjoyed it since the beginning, it has gotten much better and the freemium nature has been toned down some (not all the way, of course but enough that I was actually ok with spending some money on the game).

I've been a big fan of all the past Puzzle Quest games so I was initially disappointed to see them go the freemium route but I'm hooked now. Might be worth a second look! :)