You know you're in for a treat when the opening cinematic of a hidden-object adventure features a lady straight-up shanking a massive god straight through the heart, and things only get better from there. In EleFun Games' Mayan Prophecies: Blood Moon, you play US Coastal Guard Alexis, who one night is awoken to discover the city has a little jaguar problem. Turns out some lunatic is going around turning people into the big cats in a bid to resurrect an ancient evil deity, because some people can't have a normal hobby, and you'll need the help of your transformed buddy Gregory and Sofia, the whitest Mayan priestess you've ever seen, to petition the help of the Moon Goddess before it's too late. You'll search for hidden-objects, solve puzzles, save a manatee, find a fascinator for a mermaid, discover the weirdness that is the Good Boy/Bad Boy skull lock (how do you even commission something like that?)... oh, and command your shapeshifted, mind controlled best friend to fetch things for you like a dog through the help of a magic talisman. With customizable difficulty, a handy instant travel map, and the option to play mahjong instead of hidden-object scenes, Mayan Prophecies: Blood Moon has all the bones of a solidly constructed casual adventure, with the meat of an absolutely bonkers story wrapped around them. Just the way I like 'em. 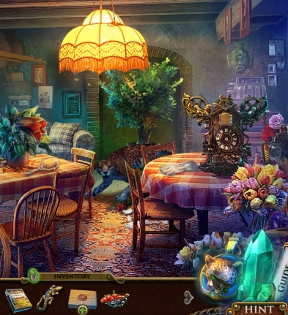 I know pointing out that point-and-click adventures frequently have ridiculous logic is like saying water is wet, but you guys, this game is so ridiculous. Of course the key to a freshly locked cage is in a buried treasure chest deep underwater. Of course there's a watering can in the glove compartment. Of course assembling this box causes a paper flower to magically appear. Of course this flower has a set of car keys inside it. While it's hard to get stuck because most items have an obvious use and the game is good at directing you where you should be headed next, none of it makes any sort of realistic sense whatsoever to the point where it feels like it was assembled with mad libs. Mayan Prophecies: Blood Moon is not a game for players who find this sort of thing obnoxious, but if you don't demand a whole lot of logic, you'll never be bored here. Gregory the magical talisman leopard makes a far more handy animal sidekick than the usual annoying little cute critter most hidden-object games saddle you with, and the game will even remind you when you should be using him to help instead of looking for an item to accomplish the job. The balance of puzzles to hidden-object scenes is well done, and the areas well designed enough that though there is backtracking, it's usually fairly quick and contained. 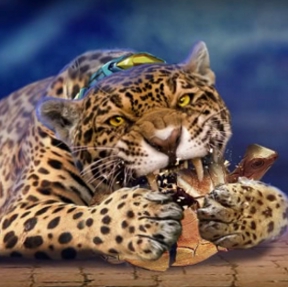 As far as the plot goes, well, it's about a poacher who gets possessed by an evil jaguar god and turns your friend into a cat so he can capture the moon goddess and rule the world. It's campy, crazy, and exactly the sort of thing you'd expect to come across on SyFy Channel late at night. It doesn't exactly have a lot of depth to it, but it does have flair and drama in a big way. The voice acting can be a little wooden, but the cutscenes are always flashy and exciting, and the artwork is simply beautiful. Mayan Prophecies: Blood Moon feels like it needed a little something more to hook players and be memorable beyond the few hours a playthrough takes, since the difficulty is on the whole set rather low. But fans of mystical Indiana Jones-style adventures will find this a welcome respite from the considerably more grim title that usually clog the market, and it makes for excellent lazy afternoon entertainment of the "Haha, what is haaaaaaappening?" variety. It may be weird, but it's well made and fun, and the demo is easily worth a look for players who prefer their games with lighter tones but no less action and drama.