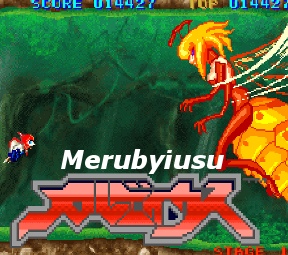 If you think kids these days have it too easy with their save points and their health meters and their self-esteem not left in tatters from a digital villain, then this is the game you've been waiting for. Merubyiusu, from H. Inada, is a retro side-scroller shooter straight out of the mid-nineties. You play a winged fox flying through a forest, trying not to get blown up by blowing up your enemies first. Why? Who cares! At only three stages so far, each with its own boss fight, Merubyiusu is short enough to whet your appetite and pique your nostalgia, and just difficult enough to erode your soul. (It itches!)

Only the start menu is in English, but that's all you'll need to play. Select "Start" by hitting [space]. Merubyiusu controls by flying with the [arrow] keys, firing with [X], and swapping between your available weapons with [Z]. There are four to get in all, each dropped by enemies, and each fires in its own unique way. You can hold down the [X] button the whole way and spray a weak stream of fire without stopping, or you can hold off and give the gauge in the lower-left corner time to fill, and find your next shots that much deadlier. Just don't spend too much time watching it; enemies are quick and numerous, and one hit takes away one of your three lives. Once all of them are gone, it's game over. (Although you can continue from between levels once you've finished one.)

Still, as simple as it is, Merubyiusu does occasionally seem a little unbalanced. Enemies can take dozens of hits but I can only take one? And the green weapon with the homing projectiles seems like a cheap and easy way to victory at first... until it starts locking on to enemies behind obstacles it can't reach instead of targeting the closest death-bot. Is it really hard, or have I just become soft from a decade of auto-targeting and clever AI? I'm not sure, but just as some people will rejoice at the difficulty, others may be turned off by it.

However, enemies appear in set places in each stage, and once you've gone through it once or twice you'll find it's easier to stay, you know, non-dead when you know which direction your intended demise is coming from next. If you're looking for something short to hearken you back to the days of Nintendo Power Gloves and Red Ryder BB Guns, you'll probably enjoy the game's arcade feel. Merubyiusu has a lot of expanding to do, but in the meantime, saddle up your fox and ride on out. It's something to cheer those of us up who die a little inside every time we talk about Gradius and the 12-year-old kid with his DS says, "What's that?"

For those willing to give it a shot, but without much experience with shmups, I'd recommend watching the enemy bullets more than you watch your character.

Forget about killing things so much as you worry about not dying. It's kind of the first step to getting good at them, and it's a little less frustrating that way.

Ah, an oldie but goodie. I thought I had found this one here actually, but apparently that is not the case.

An enjoyable bit of retro nostalgia :)
Quite challenging until you...

Collect one of each weapon orb. Then every upgrade orb becomes a power icon. This gives you a full power gage for a while. Usually enough time for the next upgrade bot to appear.

So just blast with the green homers till something hard comes your way and switch to the laser cannon.

If you ever get killed in the middle of a level, especially level 3 you will probably have to continue from the start to collect enough orbs before it gets very hard.

It seems that the weapons could be much more balanced.

Homer - Tracks enemys. Bursts from this will take out any small enemies easily. Very useful

Laser - very powerful. Goes through most enemies. Moves with your ship even after firing, can be used to shoot around corners.

Starting Gun - quite powerful, quite wide beam at full power.

Spread - three shot spread. Very weak, no real use for this if you have the homers.

It was really up until the spider-crab thing on the second level.

Extremely bad game. I get hit once which leads to a second hit and then a third because there is no invincibility after being hit and I lose control of my ship. So basically the 3 lives mean nothing because being hit once makes a chain reaction. The game window is too small and the graphics, even for "retro style" are bad.

If I wasn't still trying to beat Life Force on the NES I'd probably keep trying until I beat this one.

Graphics are gorgeous. The weapon system was a bit of a let-down, though. Rather than watching your ship gradually become more powerful, you have to switch weapons.

Getting the mega powerups for having all four weapons is a nice throwback to Gradius, but not a really forgiving one. As stated above, having three lives is more of a formality than anything else: the moment you lose the first, you have lost a weapon AND the screen has even more enemies and bullets due to three seconds of you not killing things. So, the extra lives only really help in some situations.

Otherwise, an excellent game for those into shmups, but one less hardened players may wish to avoid.

The power-up icons and enemies look *very* familiar. Are we sure this isn't just a port of some older arcade game? (I'm not sure where else I would have played it. And it's true a lot of games in the Gradius/Lifeforce/R-Type style were very similar. But this one feels unusually so.)

I've got a problem.

THE BUTTON TAKES ME TO THE MAIN MENU OF THE SITE!

A bit silly if you ask me.
No offense but why take me to the main menu of the site?

I wish to play it. It looks fun!

That's all for now.

[Thanks for pointing that out. I checked the site we originally linked to and the game doesn't appear to be there anymore. So, I'm hosting the game here at JIG until I can find where the creator moved it to. All the links in the review above have been updated. Cheers! -Jay]