Stop me if you've heard this one. A plucky young boy or girl is given equipment by an eccentric professor to venture out into a colourful world to find, capture, train and evolve elemental monsters of varying rarities hiding in tall grass, while earning tokens of worth from powerful leaders, and winds up saving the world from an ancient powerful creature and a shadowy organization along the way. Sounds familiar, right? But surprisingly, ZigZaGames' RPG adventure Micromon for iOS isn't just another half-hearted Pokemon rip-off. While the influences and similarities are glaring in a lot of ways, Micromon's incredibly polished presentation, and colourful world filled with strange characters and quests, make it well worth checking out. When you find yourself sucked into a bizarre digital world, you jump at the chance to go on your very own monster catching adventure as any nerd would do, but strange things are happening in the world. A colossal Micromon appeared not that long ago and destroyed a small town, which could be tied to a mysterious artifact you just found, and there's some weird people following you... they don't want your Micromon, they want you! Micromon features a robust single player quest that's more than worth the price of admission, but sadly offers a monetization model that means players who pay will always be on top in the optional multiplayer arena if you haven't ground levels and monsters until your fingers are a fine powder. This is somehow Gary Oak's fault isn't it? I hate that guy. 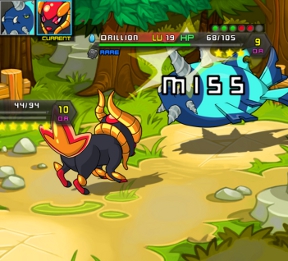 For most of you, Micromon will feel very familiar in how it plays. You'll explore the world, meeting and undertaking quests for various characters, and along the way find, capture, and train the 127 Micromon that live in different areas. Catching Micromon is pretty shameless when it comes to how it stacks up to Pokemon. You trek down different routes, keeping an eye on any grass, and if it rustles, you can hop into it and battle whatever Micromon is there. Micromon come in different types, of course, as well as different rarities, and need to be beaten down to low health before you catch them with Chips. The Micromon in your party (up to six, of course) level up if they participate in combat, learning different moves to equip (up to four with one "passive" ability you can swap out), and evolving when they reach certain levels. While each Micromon usually has a basic "free" attack, other abilities use Stamina, and after battle you'll be given... random... junk that somehow translates into coins, and orbs that restore some of your health and stamina. If your entire party gets KOd, it's game over, so save frequently, but since there are no timers or waiting periods of any sort, all you'll lose is progress when you start back up.

Because it wouldn't be an iOS game without a secondary currency, Micromon is all about diamonds. Diamonds are used to not only buy eggs with guaranteed rare, powerful Micromon from the lottery, but also to enter certain optional areas of the game... with rare, powerful Micromon in them. While you can purchase diamonds through in-app purchases for chances at rare monsters and eggs, it is entirely optional and unnecessary to complete the game with all Micromon caught, and you can earn some diamonds through regular play and multiplayer. A Micromon's growth and power caps are influence by how high its Development Rate is, while Micromon bought will always have a maxed DR of 10, despite most wild-caught Micromon tending to have lower DR, finding Micromon with a DR of 10, even extremely rare ones, isn't actually as difficult as you might think. On the other hand, this means during multiplayer players who are willing to pay will almost always have a leg up on those who aren't. Further, multiplayer is currently broken in the sense that you can be matched up with someone grossly above your level, and players can simply quit matches if it looks like they're losing, DANGIT, GARY. 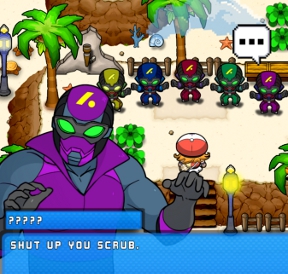 Analysis: It's hard not to be cynical about Micromon. Monster hunter RPGs are basically their own genre at this point, with games like Monster Rancher, Digimon, and more having been around for a long time, and even Pokemon Tower Defense, which is less homage and more straight-up fanfic. The structure of so many things is so close to Pokemon, from the tall grass and running shoes to the "Legion" leaders and more that it almost feels like Micromon is trying to be a parody at times. And it doesn't need to be a parody, because frustrating multiplayer aside, there's a lot to recommend it. Sure, there's "only" 127 Micromon, but Pokemon didn't have much more when the series first began either. Micromon's Kickstarter failed two years ago, so to see it appear as fleshed out and big as it is, even if it's missing some of the features the developers planned and isn't free, is pretty impressive. Your $0.99 USD, which is what the game goes for as of this writing, is going to get you a lot of hours of content, and with an insanely high level of polish to its presentation too.

Micromon looks absolutely gorgeous, with a staggering amount of colour and detail in every environment, and it animates incredibly smoothly too. The tone is mostly light-hearted with a healthy dose of goofy humour, so even if the writing is just, well, sufficient, its tongue-in-cheek vibe and unrelenting cheer makes it a joy to play. Grinding? Yeah, there's a lot of that, especially early on before your Micromon start learning more moves so you can vary your strategy. There are only a handful of elemental types, so combat is mostly straight-forward, but the inclusion of passive abilities you can swap out and the fact that your Micromon keep all the moves they learn (though you can only use four at a time) allows you to change your strategy on the fly if you're having difficulty. In-game cash will probably be the thing you struggle with most for a while, since the loot monsters drop is nothing short of paltry early on and items are expensive, but finding spots to "farm" with Micromon of appropriate levels and types will make a big difference. The rarer varieties of Micromon aren't actually that rare at all once you know where to look, though the three-capture-attempts-per-battle cap seems pointlessly restrictive.

Micromon is not without its issues, but even taking those into consideration it's still something I'd wind up recommending for its entry level price even if you don't spend another dime on it. Micromon is ambitious in a good way, and though it has its kinks to be ironed out, there's clearly a massive amount of work and passion behind it. No, it's not a Pokemon-killer by any means, but it's silly and happy and like you needed another excuse to catch and train up a cuddly squad of death critters anyway.

This game feels like playing the beta to a really great game. The bones are good, but there's a lot of little of things that I think could use polishing/tweaking.

Also, the game crashes every time the attack "Focus Attack" is used on my iPod Touch 4.