Midnight Spooks: The Thing in the Basement 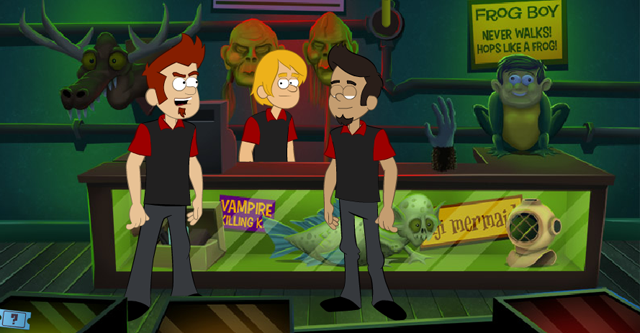 I'm sure that you investigated a mystery or two when you were a kid. Perhaps that thing that went bump in the night was something as innocuous as a shadow cast across the room or a tree branch rapping against the window. So now as a grown-up, you naturally show no fear of these spooky, almost superstitious happenings. As employees in the Museum of the Weird, owned by none other than the aptly named Mr. Spooky himself, you begin to have your doubts about a deep secret that may be laying in wait underneath.

Supposedly, there is something that Mr. Spooky has hidden in his basement and, with Noah's curiosity having gotten the better of him and Mr. Spooky having left for the day, he is now deadest on finding exactly what it is. The other two employees still there at closing time express reservations about this plan, with one explaining that he's worked there for a year and doesn't want to get fired for causing trouble, and the other claiming that the thing in the basement is actually Mr. Spooky's brother, allegedly armed with sharp and dangerous weapons.

Noah is naturally skeptical of these assertions, claiming that it's all a bunch of nonsense and promising to go investigate himself, even offering to retrieve a lost item from down there. Despite the hesitation of the other employees, neither of them make a direct effort to physically stop him from going to investigate, so you are left to play as one of the employees, Jacob and find a way into the basement.

As you explore around the museum, you'll see plenty of sights that are half-weird, half...fake? There's a haunted skull that looks "more like a nightlight," a half-human, half-alligator allegedly found in a Florida swamp, and Vampire Killing kits for sale, along with many more interesting objects. You'll explore several rooms of the museum, looking for clues and hints to try and find something that may lead you into the basement, and then get further inside. The atmosphere leaves you with your sense curiously divided between dread and "no, it must all be a hoax!" But the only real way to settle it once and for all is for you to solve all the puzzles and send Noah trooping into the basement to find out.

Carmel Games puts together another horror style game in a similar style to their Trapped series, but full length and packed with more scenery instead of the one-room escape theme. You play using only mouse controls to navigate between rooms and to pick up items. Your inventory is displayed at the bottom of the screen, and you can use the items there on the environment or on each other to combine and help progress the story.

Good luck, and don't get too spooked!

Play Midnight Spooks: The Thing in the Basement

If you wait on the title screen, the creepy music develops into a theme song!

Midnight Spooks: The Thing in the Basement

Mr. Spooky's museum isn't so spooky if you're working there. Except for that one thing in the basement…

After talking to Mason at the counter several times, you exhaust the limits of his humor. So you take a quick look at the vampire killing kit and the monkey's paw, but the pipes and valve on the back wall are somehow more interesting. You check the cash register which actually stores tokens, and you borrow one.

Move left to the locked museum entrance, dimly illuminated by a haunted skull which sits next to a weird eyeball palm with a three-digit lock. The pipes end here in a valve and a tap handle.

Move right twice to the space exhibits, where a rocket with a flashing button between two handles sits next to a rope hanging from the ceiling. A vintage Zoltar machine needs a token to work.

Move right to a coffin of horrors, the body of which has a three-symbol lock. There are two valves on the pipes here, one of which is directly above a floor grate screwed down. There's also a glowing pyramid of neon lines on a box whose lines can be lit up in similar colors.

A manicule (hand) on the wall points right, so move right to find a friendly bigfoot encased in ice, as well as compass and four-symbol locks next to a Don't Touch sign. (But you're an employee, so go ahead and touch all the things.) The pipes (with valves) lead onward to the right.

And then they end in the wall and a barrel which drains into a hole marked Danger. But first, you have to deal with Noah hurrying you to get that key.

Adjust the valves to fill the Danger hole.

Then turn the faucet on this pipe, and go back over to the rightmost screen and turn the tap on the barrel.

The hole fills up and a rotten wooden box floats up with symbols on it.

Go back to the Don't Touch safe, and use the clue from the wooden box to unlock it.

Open the safe to find an axe.

Use the axe on the floating box to cut a hole in it. Take a key from inside.

The basement door is axe-proof, so use the key to unlock it.

Downstairs, there's a vampire painting glued to the wall and a triangle-socketed metal plank next to the forbidden door (with no knob or key lock).

Use the axe on the painting to cut the canvas. Behind, there's a clue with three degree measures.

Use the clue from the downstairs painting to unlock the compass safe.

So click the 1st (right after the top), 7th and 23rd (right before the top) lights clockwise from top.

The safe opens so you can take a golden triangle with an eye engraved in it.

Unlock the safe beneath the flashing pyramid using the clue from the pyramid itself.

The square with cross is a top-down view of the pyramid. (Also bottom-up, but in this case top-down is correct.)

Note that the buttons on the safe cycle through lime (green), cyan (blue), magenta (pink) and yellow colors.

Click the buttons accordingly, and the safe opens so you can take the weight from inside.

Use the weight on the rope next to Zoltar, and a shutter opens nearby with a screwdriver inside.

Use the screwdriver to unscrew the floor grate next to the coffin, and take the treasure map from under it.

Use the clue from the treasure map to unlock the coffin.

The path on the map passes through flags marked with a circle, plus and six-pointed star.

A compartment opens so you can get another golden eye triangle.

Use the token on the Zoltar machine, which spits out a card with a time written on it.

So use that clue to unlock the rocket.

Click the handles on the rocket 11 and 8 times, so that the lines on the display match the 11:40 clue on the card.

Then push the button to receive a note with a clue about colored water.

Use the clue from the water note to unlock the hand at the museum entrance.

In case of colorblindness:

For simplicity, this calculation uses half-cups, indicated by ½B, ½Y, ½R.

So enter that in the safe under the hand, and open it to get a light bulb that glows red in your inventory.

Then use the lightbulb on the skull, which brightens up the place and lets you get another golden eye triangle.

You should now have three triangles (from the compass, coffin and skull), so place them in the sockets next to the forbidden door.

The door opens, so Noah goes in and retrieves a ball for you!

thanks again as always kk, one thing though

on the colored line puzzle, I got confused on how to set the colors right so I had to look it up on youtube. perhaps you could explain it better in case anyone else needs the help.

other then that it was awesome.

I had huge trouble writing that part, and it's good to know you eventually got the solution. In hindsight, I should have just used a screenshot, like so: