Miriel the Magical Merchant is a medieval-themed time management game from Myth People, the same folks that brought us the well-polished puzzle game Azkend. As per the developer's reputation, Miriel the Magical Merchant takes a familiar formula, pulls out some of the set conventions, replaces them with something much more interesting, and slaps a shiny coat of paint on the top. The final product is something familiar but remarkably fresh that looks almost as good as it plays. 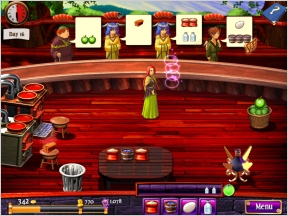 Since her father disappeared, Miriel has struggled to maintain the family's shop. But one day she gets a messasge from someone who's willing to assist her. Your job is to help her pay off her debt by selling food to customers as quickly and efficiently as possible. The interesting twist is that the storyline is interactive with an outcome based on which choices you made during each cut scene.

Using her magical skills Miriel can serve and create a number of food items from scratch. When a customer comes in and orders, queue up what he or she has chosen at the bottom of the screen. When the food appears on the table, simply click it and take it to the patron and receive your payment. Serve a customer before the golden wing disappears and you'll charge the haste pot. After four charges you'll get a temporary speed boost that increases Miriel's speed and makes food creation happen almost instantly.

The fun twist in Miriel the Magical Merchant is that in addition to serving buckets of water and delicious green apples you'll also do quite a bit of baking. Your first recipe is bread, easily created by summoning a bag of flour, a bucket of water, and carrying both items over to the oven. Put them in, wait a few moments, and out comes bread. As you progress through the game you get more and more recipes to cook up, increasing your profits and providing a more involved gaming experience. The nice bonus is that you get gradually unlock a catalogue of Miriel's recipes — real recipes you can bake up in your kitchen without the use of maigic!

Upgrading your equipment is also handled in a different way than most resource management sims. Instead of spending money and choosing what to buy, every few levels you'll be able to choose a single item to upgrade. A quick game of SameGame follows, simply keep the tiles from reaching the top of the screen and you get your reward. 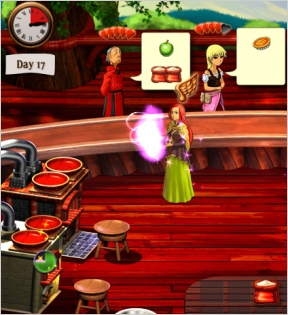 Analysis: Miriel the Magical Merchant is easily categorized as a resource management game, but instead of droning through the levels just to upgrade my equipment, I genuinely enjoyed every minute of gameplay. The first two thirds of the game are just the right amount of challenge, and afterwards the speed really ramps up and keeps your mouse hand working overtime.

The recipe system is simultaneously one of the game's biggest strengths and its chief weakness. It's fun to create dishes on-the-fly and it really changes the overall feel of an otherwise standard resource management game. But because there are so many recipes, a little memorization is in order. Most of the combinations are simple, but from time to time you'll get some of them swapped around in your head. Fortunately the recipes are introduced at a gradual pace, giving you plenty of time to commit them to memory. And if you're stuck, you can always hover the cursor over the customer requesting the baked item to see the recipe in question.

Familiar enough to pull you right in, but with plenty of originality to warrant some attention. Miriel the Magical Merchant is a surprisingly interesting title that's infused with a little magic of its own.

Calling all Diner Dash fans -- this is a pretty fun game if you're into this genre.

It got a little hard for me towards the later levels but the challenges are awesome. I personally liked the fact that you could control some of your own dialogue with Miriel although I haven't played it enough to see how it actually changes your game (based on the choice of response you give her.) For some reason (and you'll see in the game) I just HAD to have some fried eggs with buttery toast after playing! LOL