The year is 1978. A child has found a game they've never heard of before. It fits into the Video Computer System's cartridge slot just fine, though, and the paper found attached to the game spins an interesting tale of demons and castles. The child is not ready for what they are about to face, for in this game, losing a life means losing a bit of mind. Once that mind is week enough, it will become a perfect conduit for... things on the other side of the screen. And they been waiting. Misadventure is an action-adventure horror game by Mike Houser, done in the retro style of a pseudo-4-bit Atari game gone horribly wrong. Move the little blip with [WASD] or [arrow] keys. You pick up object automatically by walking into them, though you can drop them with [X] or the [spacebar]. Though the manual at the start of the game will give you some general guidance, for the most part, though, you will be on your own. 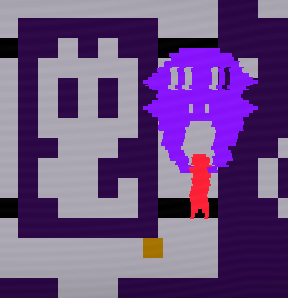 Whether it's the Godzilla NES Creepypasta, Ben Drowned, or even The Story of the Blanks, it's interesting to see how authors have, as of late, used the retro-gaming medium to create a unique brand of fourth-wall breaking horror. One supposes the premise works so well since it combines the kind of skewed nostalgia and innocence that makes old toys and amusement parks so creepy, with the the technical confrontation of a glitched screen: those things always end up looking like a portal into madness, so it's a natural fit that they should ending up being one.

But where Misadventure excels in its creepy cosmic horror atmosphere and slow-building sense of dread, it could afford to be a bit more explicit in its gameplay mechanics. They can be sussed out well enough after a couple of deaths, but by that point, some players might be too freaked out to want to try again (or, at least, frustrated). That being said, Misadventure uses its pixelated blotches of red to create a world that's, in many ways, more viscerally frightening than many horror games with top of the line graphics. Those in the mood for a scare should turn out the lights, turn up the sound, and steel themselves into pressing start.

Thanks to Dan for sending this one in!

Part of the point of Misadventure is figuring it out for yourself. Even the best of us need a nudge in the right direction sometimes, though. I've tried to provide hints when possible and hiding spoiler information. Still, I recommend that you only use the walkthrough when you're really, really stuck.

I ended up describing a lot of things by color, because there isn't much else that differentiates the rooms and monsters. I tried to use other descriptors too, but this walkthrough might just not be very accessible for people who have difficulty distinguishing colors, and I'm sorry for that.

As someone who loved the original Atari 2600 game Adventure as a child and Lovecraftian horror, this was a blast!

And I enjoyed getting to kill everything that annoyed you on the way back.

Although getting sent back to the start for losing was a bit extreme.

This was a lot of fun until I dropped an item onto a message, couldn't pick it up again and found out pressing escape (I think) resets the entire game without warning.

A pretty big design flaw, although once you know what to expect, it shouldn't take too long to get back where you were. At least, I was in the 4th house, that's pretty doable.

Apart from that, it's a great game. The amount of horror and misery being conveyed by pixels the size of coconuts is stunning.

I don't know if it's just me, but all I got from clicking the link was an infinitely buffering video.

This was cute and kind of fun, but it was running really choppy on my computer. Sometimes the game would seem to hesitate and then jump ahead so I couldn't make precise movements. Given the nature of the game I couldn't entirely tell if that was intentional or not.

It really wasn't as creepy as I had anticipated. It wears its spookiness on its sleeve and a few of the monsters are downright predictable. The fact that you can die entirely is actually a negative, because once you know what's coming it's not frightening any more. That's where games like Yume Nikki thrive, since the sense of dread comes from not knowing what you might encounter next.

All in all, though, I liked it. It was short and fun, and the last bit gives you a good sense of closure.

@repairmanman: that's an ad that's trying, and failing, to load. Try disabling your ad-blocker for the page.

The game's unplayable for me. The visuals aren't responsive with the controls, so the character will appear to jump from one side of the screen to the other when I hold an arrow key.

It's a shame; this looked like a really interesting game.

It appears it's not just this game. Pretty much every game I play hosted on this site is lagging like crazy, including games that previously had no problem.

I just changed the Flash embed parameter (wmode: "window") for this particular game and the lag seems to be gone now. Adobe suggests "direct" for the wmode parameter for "best performance", and that's how all of the games are embedded on this site by default, and it's been that way for over almost 2 years now.

Everything works again. Thanks!

Actually one of a few minimalistic games I liked and played to the end.

THAT WAS INCREDIBLE.
never have so few pixels caused so much fear in so many.

Part of the point of Misadventure is figuring it out for yourself. Even the best of us need a nudge in the right direction sometimes, though. I've tried to provide hints when possible and hiding spoiler information. Still, I recommend that you only use the walkthrough when you're really, really stuck.

I ended up describing a lot of things by color, because there isn't much else that differentiates the rooms and monsters. I tried to use other descriptors too, but this walkthrough might just not be very accessible for people who have difficulty distinguishing colors, and I'm sorry for that.

I played for a little while, then I died once and couldn't deal with the creepy bgm and seemingly hopeless spike room (the second one), so I closed the tab. Lag caused the music to continue for a few more seconds, and it felt like the game was penalizing me for quitting... Yeah... I'm not playing this again.....

For once, I really enjoyed that you have a limited tries to reach the end. It is not impossible, and it definitely make the game experience longer.
I liked this game very much. The atmosphere and the whole weird gameplay, that you have to figure out along the way and you have to master it, to get to the end. 5/5 from me.

I wasn't able to tightly control the cursor (and don't tell me it was that way in Adventure -- I'm old enough to remember Adventure), so it wasn't that much fun. The atmosphere was great, but that's not enough to make up for running into things that should be easily avoided.

DARNIT that was hard! I managed to get through a certain area on my first play through, although, as the review said, I wasted several lives before I figured out what was going on. So I restarted, but on my second run through I SUCKED.
Still, full stars, I'll definitely play this one again. It had the right amount of disturbing and creepy. Like poltergeist for the Atari.