Sequels should do everything bigger, better, and louder than the original. A good way to up the stakes is to take the kind of conflicts that drove the plot of the first game and make them more personal and more urgent. Mishap: An Accidental Haunting, as the title suggests, was about a couple who simply didn't do their real estate research thoroughly and got swept up into a ghost-capturing adventure. It was a rollicking game that did pretty much everything right, and it won the Best Hidden Object Game of 2009 award from your favorite game review website! This time, the haunting isn't an accident, but the kidnapping of Hobblepop's ghostly wife Ellen by anagrammed villain Nailliv that throws the plot into motion. You won't be disappointed with Mishap 2: An Intentional Haunting. Now, the hidden object fun goes to eleven! 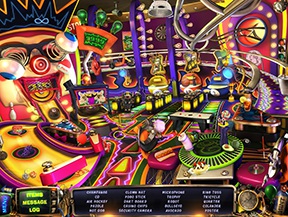 Like its predecessor, Mishap 2 doesn't take itself or its genre too seriously. There is a little bit of hand-waving about collecting objects that the spirits interacted with, but let's face it. The game knows why you're here. You know why you're here. Do we have to make excuses with each other? Can't we just enjoy 32 gorgeously detailed hidden object scenes, with every object lovingly rendered, and every scene featuring several fascinating moving parts? Seriously, I feel sorry for you if all you ever see of this game are the screenshots. The playful details of a Japanese paper lantern that periodically sticks its tongue out at you, or a gruesomely whimsical toy soldier marching in place with a very, very large knife have to be seen in their full motion glory to be appreciated.

You pick up objects by clicking on them. Some objects will be collected by Hobblepop and turned into a weird gadget that will be used as part of the chapter ending minigame. Other objects will be incorporated into a riddle, specifically a rebus, which the player must solve. If you're playing in scary mode, misclicks may be punished with a sudden, screen-filling shock. (An untimed mode that doesn't penalize for misclicks is also available.) Each chapter has one major, powerful ghost that must be appeased, but you'll also pick up five other, lesser ghosts per chapter. You can peruse their stories at your leisure, along with a diary from the villain eventually. 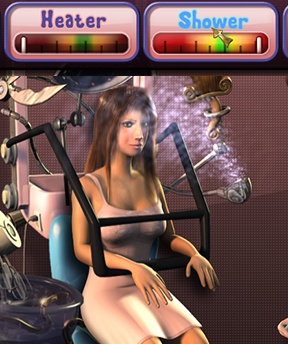 Analysis: The ghosts from the last game make some cameo appearances here assisting Hobblepop, and the Burtons are apparently getting the hang of this ghost-chasing thing because they're both along as well. Mishap 2 keeps the same high, if hokey, writing and voice-acting standards as its predecessor. It's a bit of a puzzlement why the frenzied Norseman has a completely over-the-top Scottish accent, but some mysteries are for the ages, I guess.

If you didn't play the first game, while the sequel does a good job at explaining how to play, you may be a little in the dark about who exactly these people are. I don't know why the game didn't include a character guide or perhaps a little recap for the newbies in the audience, but hey, you could always go and play the the first game, if you missed it before. Anyone who enjoys one will enjoy the other, so there's really no reason not to play both.

The game is not scary per se, but it is macabre even in its cartoonish whimsy. Almost all of the ghosts met Looney Tunes-style demises, and their ghosts frequently bear traces of this, such as a permanent hoofprint in the face. The misclick jump scares can be a little startling even when you're used to them, as they seem to occur at random (that is, it isn't "misclick five times, get a jump scare"; you can misclick a dozen times and not get one, and then misclick once and get one). The final mini-game is a surgery game, and while it's not bloody, the patient literally has both arms off and little bones poking out, which was enough to get me a little squeamish. The game might be a little intense for kids who haven't quite mastered fantasy/reality differences, but should be fine for other audiences, even those who normally choose to avoid horror games.

The mini-games are a little more imaginative this time out, but they can drag a little since most of them are five rounds. All the mini-games can be skipped, but you must play at least one round to do so.The instructions tend to be wall-of-text infodumps, which can be a lot to absorb all at once.

This is certainly the best hidden object I've played this year. I know that we aren't even out of January, so that may sound like condemning with faint praise, but I have a hunch that even if you catch me in December, I'll be singing the same song. This will definitely be in the running for Best of 2011. Let's just hope that Mishap 3 takes it up to twelve!