Mission in Space: The Lost Colony 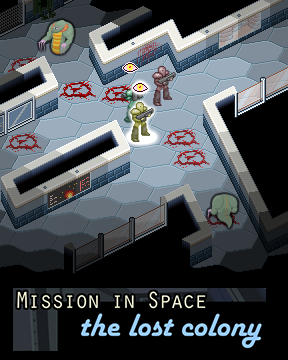 There's a lot of debate over whether governments should invest in space exploration, mostly a lot of blah blah blah about the expense. But there's a much better reason why we should never build space stations in distant areas of the galaxy, and Storm Alligator has provided with the cautionary tale why in Mission in Space: The Lost Colony. Oh sure, at first glance it's an extremely competent turn-based strategy game with a compelling sci-fi storyline. But don't miss the forest for the trees here. If we go out into space, aliens are going to leap out of ventilation ducts and feast on our entrails. Do you want your entrails to be feasted upon? Do you? I thought not. Let's just stay on earth and play games about it instead.

The game's interface is intuitive. You can play the entire thing with just the mouse, or you can use various hotkeys such as [tab] to switch between party members and [X] to end a turn. The game's first few levels serve as a tutorial, and there is also a question mark icon in the upper right hand corner to explain anything you're unsure about. This icon also provides hints for the current level. Guide your party around an alien-infested space colony. Sorry, you can't just brandish your flamethrower and lay waste to everything; what would be the strategy in that? Instead, each level has certain mission objectives, such as restarting drainage systems and rescuing survivors. Last through all three acts, and you can save the colony. 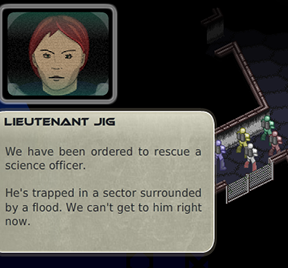 Analysis: The key to the game is mastering the game's alert mode, whereby you can set a party member to automatically attack approaching enemies, with the drawback that the number of movement points in the next turn is hampered. Since most of the objectives involve getting from one side of the map to the other, or running around to various locations, movement points are absolutely critical, but if you let an alien get too close, it can kill a character in only one or two turns. The enemies in this game are easy to destroy (a single character can easily kill two or three aliens and still be able to do other things in a single turn), yet because the aliens just keep coming, eventually you'll be overwhelmed by sheer numbers. This adds an intense time element to the game and makes every turn feel like it counts.

You can tweak yourself via the upgrade skill tree to suit your preferred playing style, and reset your skill points as often as you want with no penalty, so you can try different approaches. There are 12 levels, but you'll probably want to play some levels more than once so that you can level up and make yourself buffer. On the other hand, the in-game badges reward the bold, with six challenges for gold starring various missions with a bare minimum of skill points, so even if you're a living Zhuge Liang, you'll find sufficient challenge there. The game's commitment to customization even extends to minor details like the ability to change the commander character's name and gender. This is truly a game that wants all players to enjoy it, and it succeeds as well at doing that as it does at warning astronauts to watch their backs.

This game is really amazing, I've been hooked on it since I first found it. The later levels are REALLY hard!

I hope this game doesn't get overlooked in year-end awards. Am back for more punishment.

Could y'all please add a hexagon tag to this? I can never remember this title, and I rather fail at finding it again.

Gaming on a Virtual Machine: Your Guide to Improving Performance in Hyper-V

16 Views
0 Comments
jayisgames.com— For some online college students, learning by playing a game sounds like a dream come true. But, in many "gamified" classrooms, the reality is closer to a clunky nightmare....  ...

1,407 Views
4 Comments
chrpa— Jayisgames needs your help to continue providing quality content. Click for details Hi! Weekday Escape and Weekday Puzzle are here! Two holidayish state escapes by Selfdefiant are lazy and simple, and then comes Coconuts Park with another episode from...  ...

1,021 Views
1 Comment
chrpa— Jayisgames needs your help to continue providing quality content. Click for details Welcome to Mobile Monday! Nicolet is back with everyday story from their world inhabited exclusively by rodents (and little cute birds). After a while is a new...  ...