Pirates, crayons, galaxies and picross grids populate this edition of Mobile Monday! If only they were used together in a single game. A space-themed picross puzzle where you make pictures of pirates using a crayon? I'd play it, that's for sure...

We're still giving away iTunes gift certificates to cover the cost of every game featured in the current Mobile Monday article. Simply sign-in with a Casual Gameplay account, leave a comment giving feedback about one of the games, then check back the week after to see if you've won. Simple! Congratulations to last week's winner, samalakar! 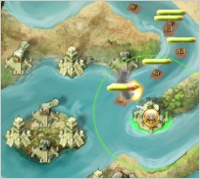 7 Cities - A nice classically-themed tower defense game where you fight off pirates out to loot the Seven Golden Cities of the Amazon. Eight unique maps, seven different towers, a slew of fantasy creatures (kraken, anyone?) and of course the ability to upgrade units. Towers have a unique skill tree that allows you to customize how you play the game: a heavy hitting powerhouse, or a splash damage frenzy? 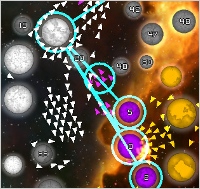 Galcon - The classic Risk-like strategy game, in sci-fi space form. In Galcon your goal is to overwhelm your enemy by sending space crafts out to conquer their worlds. The number of troops on a given base is displayed in the center, all you have to do is swarm the planet and reduce that number to zero. Expand your empire, spawn more warriors, and own the galaxy. A free Galcon Lite is also available.

PicGrid - I'm a picross addict, and I've kept a sharp eye on the iPhone nonogram scene since the app store first opened. It's been disappointment after disappointment for a long time, and then PicGrid appeared. It's a no-frills presentation kind of game, but that simplicity is what saves it from the uninstallation graveyard. No sound effects, no music, the game doesn't punish you for incorrect guesses, and a basic iPhone-style menu system to navigate. Tap a square to fill it, choose the "X" and tap to mark as blank. Most of the puzzles are on the easy side, but that hasn't stopped me from squeezing a lot of enjoyment out of it. A free Lite version is also available.

Crayon Ball - A matching game with a little physics thrown in for good measure. Your goal is to get crayon-colored balls to huddle in groups of four or more. Tilt the iPhone left or right to shake things up a bit, and tap a ball to make it disappear. But be careful! Each time you tap a ball it increases the "danger" meter below. When the meter fills, your game is over. A handful of nifty power-ups spice things up quite a bit. It seems a very chaotic game at first, but after a minute or two of playing, you'll realize there actually is a solid strategy behind those colorful orbs.

Absolute score on PicGrid! Indeed, this is one of many games that needs absolutely no added features to be on my list and is usually better that way. While I like to spend a bit of time on a big one at home (try Games magazine, they've got plenty every issue) this satiated my need for when I don't have but a few minutes to waste. I loved it.

Galcon is a well put together game, but Phil Hassey really cons people with the multiple single player modes that paying for the full game unlocks. They are all community made, are far less interesting they sound, and can not be used with multiplayer.

None the less, I have played multiplayer with my friend on this for quite a time. There is a lot of strategy and action in it that one just doesn't get when playing single player.

So, I rate it a 3/5.
It would be higher if I hadn't felt I had been conned when I bought the full game.

Coldfrog: I agree, PicGrid is excellent for when you have literally five minutes of idle time. I wish the zoom feature didn't exist, however, as I get along just fine without it and end up accidentally double-tapping and zooming in sometimes. There's an update coming soon with 20 new puzzles. :-D

I'm sure I'll be addicted to that 'easy' version.

Yay, a nonogram app! I'll have to check that out, I love doing those.

Ooh, PicGrid just got an update! 20 new puzzles, a few settings to adjust (including a way to turn off double-tap zoom!), and a slightly tweaked interface! Very nice!

Galcon is an awesome and addictive game. Even the lite version is good.

Be warned: They are coming!

Galcon is the only game you ever need. Playing online is so awesome.

I am very happy they came out with a picross game! I can't wait to play it.

galcon is also availible on instantaction.com for people on windows,
Just install the browser plugin, go to galcon, and find a game.

Galcon is a great Risk-type game that's very easy to pick up and play a quick game. Individual games never last more than 5 minutes, so it's great when just need a little something to pass the time. Difficulty ranges from none at all, to a pretty tough game. I really like it!

Galcon was impressive since it was the first game (at least, that i saw) on hte iPhone that actually used online multiplayer. Difficulty range is brutal too. Great game.

I love Galcon!
Played it first on computer, but IMHO the iPhone version is bringing it to a whole upper level, thanks to very intuitive touch controls. A true and brilliant casual game that can fill up 5 minutes, but begs for "just one more game"!

Amazingly enough I had never heard of Picross games, this is now corrected, thanks!

I had the pleasure of meeting Phil Hassey at GDC this past week where he took home the IGF Mobile Innovation in Game Design award for Galcon.