Subtitles: what do they add to your game? In the case of Samurai Bloodshow, they add about 30 letters, a trip to your French dictionary, and some artistic imagery. In the case of Sprinkle, they tell you exactly what to expect from the game. So, in the spirit of game subtitles, this edition of Mobile Monday has a subtitle. Mobile Monday: it's got games you can play! 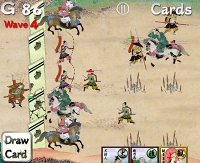 SAMURAI BLOODSHOW: les vagues blanches, les nuages rouges (universal) - Surprise! Here is a very, very good card-based strategy defense game illustrated in the style of emakimono, or Japanese picture scrolls. The unique visuals may be what draws you in, but what will keep you interested is the gradually-paced tactical progression you experience while traveling across the map, fighting greater and greater foes. Each level pits you against ten waves of enemies. Draw cards to place your battle units on the grid, then level them up or place more as you see fit. After each victory you get a new card, and after tough battles you might even get a new unit. Organize your decks between matches to deal with the more difficult enemies, then jump into battle for even more strategical fun. 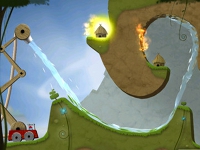 Sprinkle: Water splashing fire fighting fun! (universal) - Fires tend to destroy everything they get their little flames on, but fortunately for the flammable materials of the world, you've got a water cannon mounted on a crane! Adjust the height and angle of the cannon and fire water by touching the screen. Spray the gloopy stuff all over the fire, moving things out of your way, activating traps and otherwise dealing with a strong world of physics-based puzzles in an attempt to extinguish every dot of fire you can see. It's ridiculous amounts of fun to get this level of control over a water cannon, and the physics/puzzles of the game are well-implemented, keeping you hooked level after level!

Pickpawcket (universal) - All of the cat art has been stolen by the dogs, and it's your job to steal it back! Sneak into the dog museums and paw your way across the floor, collecting gems and avoiding the guard dog's gaze. If that weren't enough, Pickpawcket provides you with ways to distract the guards and disguise yourself, separating it from the pack of stealth-based puzzle games out there. Couple that with some fine level design and a good visual presentation (not to mention the wacky premise) and you've got the ingredients for a long, satisfying mobile game! Pickpawcket Free is also available.