Glider Classic (universal) - The decades-old classic Mac game is back. Yes, Glider Classic for iOS is that Glider game (we even featured the Mac/Windows freeware version), updated for modern mobile devices and given a new coat of paint. For those uninitiated in this early computer gaming staple, Glider puts you in control of a paper airplane floating through a house. To a folded-up sheet of paper, houses are filled with dangers, the most terrifying of which is touching the ubiquitous floor. Use vents, fans, and things like stereo equipment to stay aloft while you fly around the home, collecting stars and having a grand old time. The game really is just as good as you remembered it, and if you don't have fuzzy nostalgic feelings for Glider, now is a great time to spawn some!

Pygmies-Hoglet (universal) - This unusual, captivating, and acceptably-flawed game is quirky beyond all belief, but somehow it pulls everything together and manages to be loads and loads of fun. You control a baby porcupine who is sad because he has no friends, so he sets out to find spiny things to be pals with. Move around the map in short increments, heading towards the dots that appear at random. When you find one, you'll encounter an enemy, a friend, Santa Claus, or maybe just an item waiting to be found. You even earn experience points you can assign to certain statistics, all of which help during the game's unique combat sequences. Hoglet is not a perfect game, but its charm is so strong, you won't be able to resist playing it over and over again. 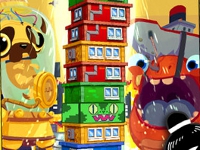 Monsters Ate My Condo (universal) - From PikPok and Adult Swim games, Monsters Ate My Condo is a matching game with giant monsters. That's really all you need to know. For fun, though, you should know that you'll be sliding layers of a high rise condo building out to make matches of three or more floors. When monsters appear to the side, slide them their own color for points and other crazy bonuses. Simple idea, over-the-top design, and strangely captivating gameplay make this a casual mobile winner. Also: you feed giant monsters!!!

Awesome! Another Glider game! Too bad it's on mobile, that's sort of inconvenient to me or something. I don't really exactly know why it's bad to tell the truth.

I should mention that the Glider Web thing linked to in the first Link Dump (which is linked in the comments of the freeware version linked above) is back up and everyone can make levels on it!