RPGs and pretty physics games and... SONIC! So much to consume on this edition of Mobile Monday. So much. Sooooo much. Hmm. Maybe too much? Yeah, a bit. Maybe just pretend these three games are two games, one of which has an unusual growth on the side that looks, acts, and plays like a different game? That's not too much to handle is it?

Ash (iPhone) - Turn-based "Japanese" style RPGs have a sort of love-em-or-hate-em reputation with gamers, but if you're a fan you'll definitely want to check out this indie title, especially if you're looking for something remarkably well-written. Ash follows a pair of mercenaries who stumble across something ancient and deadly in a mine below an unassuming country town, and wind up on a quest that will unearth their own secrets and potentially save the world in the process. Despite some repetitive grinding to the combat, Ash shines in its witty dialogue and memorable characters, and a recent update even added original art on top of extra fixes. If RPGs are your thing, you'd be silly not to check out this fantastic iOS exclusive. 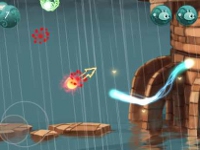 Lumi (iPhone/iPod Touch, iPad) - Sporting some amazing visuals that look like they were lifted from a painting, Lumi delivers smart physics/platform action with a lot of variety. Apart from basic walking and jumping, you also have the ability to attach and throw yourself from magnetized points on the screen as well as use light to your advantage. Your job is to defeat the darkness while rescuing your friends, and even though the touch controls are a little wobbly at times, the game performs solidly and looks amazing while doing it. Lumi HD for iPad is also available.

Sonic CD (universal) - How about this for a little nostalgia? The hedgehog who made blast processing cool has another release ported to iOS devices. This time, though, it's a much bigger deal, as it's a near-flawless copy of Sonic CD, the game widely lauded as the best Sonic game ever released. Back in 1993, the game was released for the ill-fated Sega CD add-on, but even then its mix of fast-moving platform action, bright graphics, lush level design, and creative use of past and future switches that changed the gameplay radically was something to behold. The game has held up well with time, and this iOS port is an example of what every studio should aspire to when porting games from another system. It even plays well with touch screen controls!

Every RPG fan NEEDS to check out Ash. I bought it for full price and loved it despite the grinding. It's on sale now through the holidays for .99!

I got it because I do what Dora says. And she's right!

Your total lack of Android coverage makes me sad. There's a lot of games available, and there's even a huge holiday sale going on right now.

Total lack of Android coverage? Not total, but there have been a lot more impressive iOS games lately, which is why it's been getting more attention. I prefer Android myself, but the games scene just isn't as active.